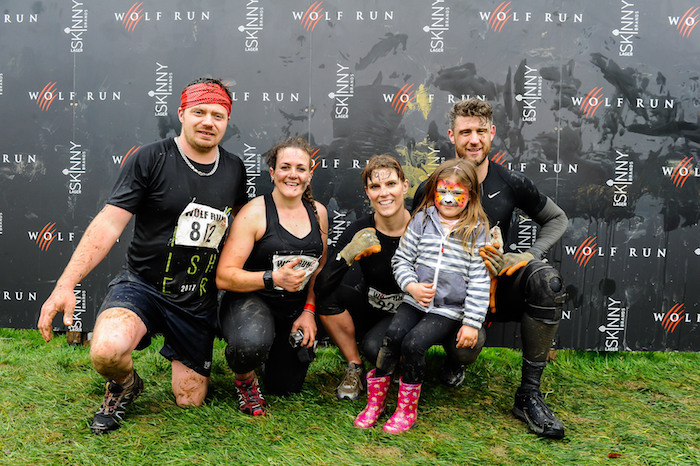 Where do I start with this one? The crazed, joyous cackle of a mud-soaked Tess leaping into boggy swamps? The scared, hyperventilating Tess flapping across a lake on her back trying not to drown? (5:44 onwards in the below video if you’re interested). Or the screaming, crampy calf that decided to go on the VERY LAST OBSTACLE, mere metres from the finish line? (Didn’t record that unfortunately, maybe for the best…)

It’s been a long time since I’ve ran an obstacle race, and I forgot just how much fun they are. If you’re a regular follower of this blog, you’ll know I’m a sucker for finding the fun in fitness – and let me tell you, the Wolf Run did not disappoint!

So much mud. So many hills. So much FUN. With a bit of swearing along the way (this was the end of April and after the extended winter we had, I can assure you, those lakes were COLD). 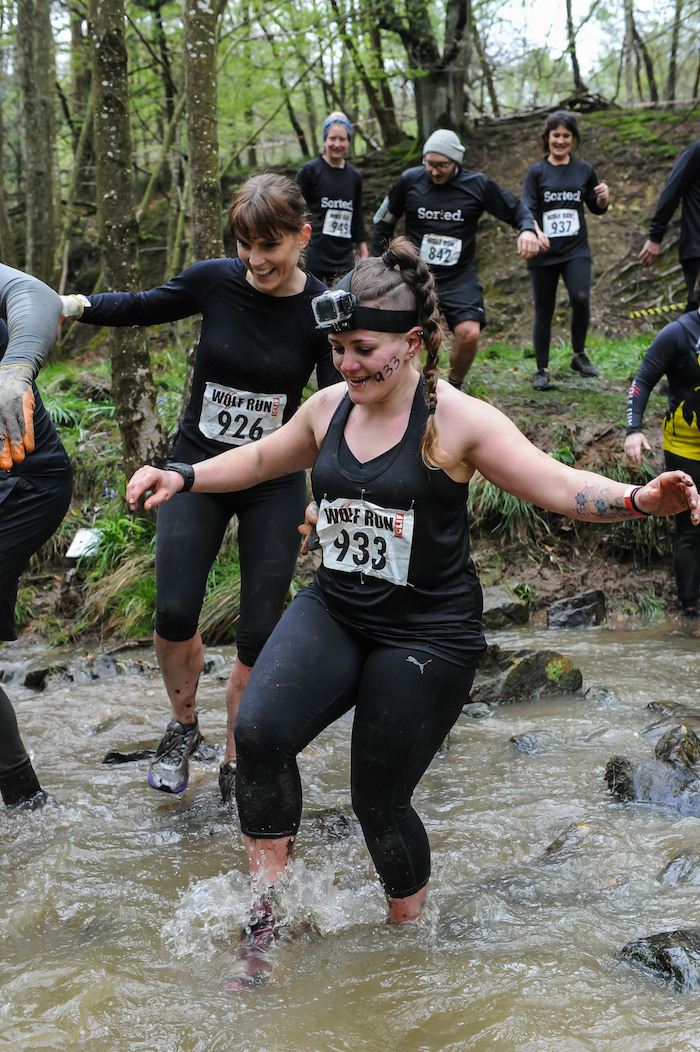 There’s something about OCRs that gives me all the feels. I think it’s the camaraderie and team aspect of it, everyone in it together, helping each other over the obstacles to the finish. Everyone smiling and laughing their way around the course, (apart from my occasional panic where deep water or heights were involved).

On April 28 I gathered my Wolf Run team and headed to Pippingford Park for the 10k race. My wolves: Chris, my tree surgeon husband (who leapt his way round the course like Tarzan on speed), and two lovely boxer friends Carla and Darren. 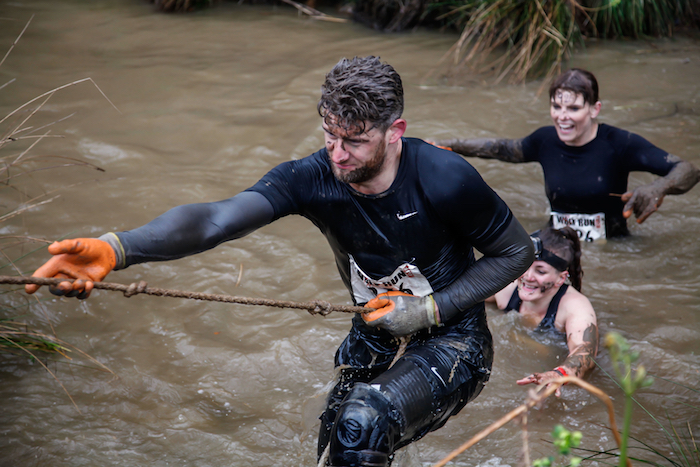 I’m not gonna lie, I was about as prepared for this as I was for the BM10K – i.e. not at all. Don’t try this at home, kids. With zero running under my belt over the past few weeks, but lots of weight training with my PT and HIIT at F45 (will blog that soon, promise), I was interested to see if I would get round in one piece.

The answer is, well… sort of. With a little help from my friends!

The course itself was stunning actually. If you like the lung-busting, leg-burning feels you get when  trail running you’ll love Pippingford Park. LOTS of very steep ups and slippy, slidy downs, stodgy, muddy hills and forests to run through, and plenty of water to swim/flap/panic your way through (delete as appropriate).

It’s a perfect location for an obstacle race, although if I did it again I would 100% do a bit of actual running in the lead up as those hills were MEGA. I thought it would be my knees that would be a problem but they were fine – it was my calves that took a right good thrashing going in and out of the freezing cold water! 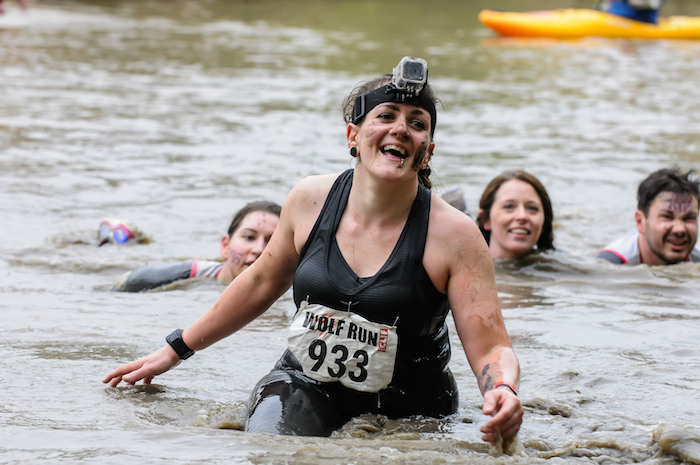 I’ve never had my muscles cramp on me mid-race. Have you? It’s really weird. It creeps up on you, with little twinges that turn into big, convulsing spasms. I realise now that these are the warning spasms of muscles saying ‘hey, I don’t like this, if you don’t stop what you’re doing, in a bit I’m gonna go batshit crazy and you won’t be able to move.’

My calf decided that right on the very last obstacle, while I was climbing to the top, mere metres from the much-anticipated finish line, would be a great place to do that. I had to slide back down the ramp holding onto the rope and get two lovely marshals to massage my muddy, bruised and beaten legs. It was an intimate moment punctured only by my swearing and ominous ‘aaaah’s and ‘ooooh’s as other runners passed us. I thought I filmed the whole thing but didn’t in the end so I’ll spare you the footage. 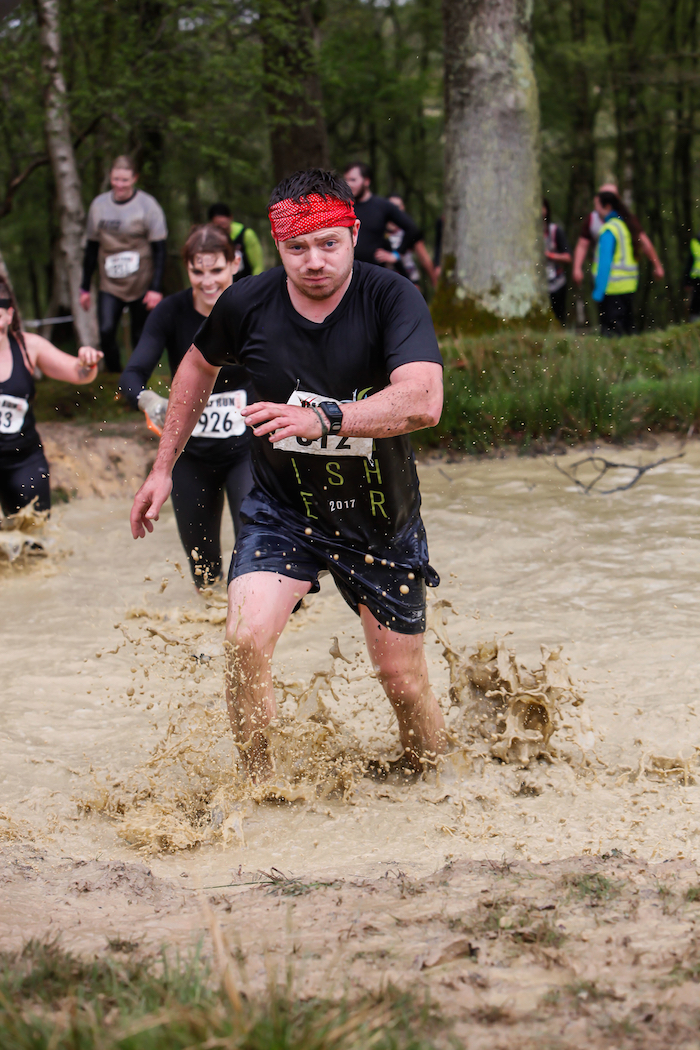 I haven’t looked at what time we finished because it doesn’t matter and it wasn’t about a time, but I know it slowed partially due to me hobbling the last mile or so with my calf and various struggles / meltdowns along the way at the big scary wet stuff called water. I need to get back in there and show myself I can swim again.

This girl can’t… but she’ll have a good try

There were two full swims along the course – one 50m and one 75m, across VERY COLD and muddy lakes. The first one was preceded by a massive water slide which sounds like fun but not if your name’s Tess so this was about 8/10 for fear factor! I did it though, mainly because there was a queue of people behind me waiting to go and I didn’t have long to think about it.

Just when I entered the cold water the shock came and that was it – couldn’t breathe, couldn’t touch the floor (short person problems), couldn’t do anything except flap at the lovely kayaker to come and save my life while the others swam to the other side. 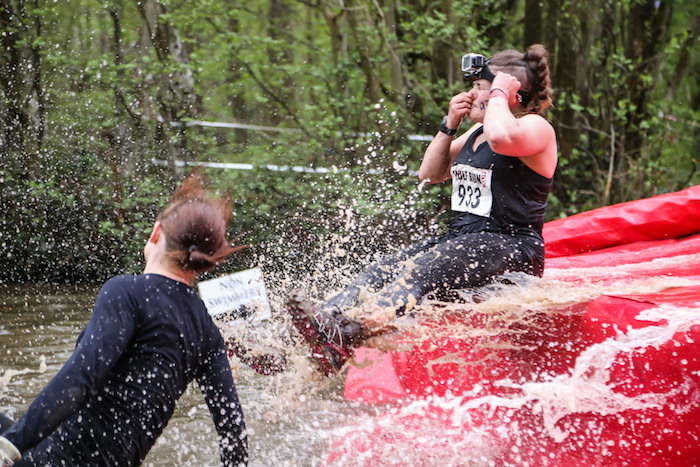 The second swim was entered in a much calmer way, by lowering ourselves into the lake. I felt I could do it this time but only if on my back so that’s what I did. Thank the bloody lord for the helpful marshals who promised to look out for me and my teammate Carla who swam beside me calming me down as I panicked my way across.

I cannot tell you how scary it was about half way across when all I could think about was how far out we were, how deep we were, how far away the kayaker now might be, how I can’t swim in my shoes, how heavy my kit is, how much the GoPro is slipping off my head, how long it’s taking to get to the other side, how I still can’t catch my breath – you get the idea.

Longest 75m EVER. But the feeling at the other end – AMAZING!

But despite the fear on some of the obstacles, the cramp and pain at various points in the race, The Wolf Run was basically just one big laugh and I’d 100% do it again. I want to do it again just to do that first swim and also that first high climbing frame.

The race village was really well stocked, including some low calorie beer, along with other food stalls, changing areas and a feck load of power hoses to jet wash ourselves down with after! There was also a bouncy castle and face painting for kids which was great as we had our very own cheerleader join us for the day.

If you fancy a laugh check out my GoPro video below and let me know what you think! Also, don’t forget to subscribe to my YouTube Channel as I’m making a lot more of these now 🙂

For more information on the Wolf Run and to take on the ‘Autumn Wolf’ back at Pippingford Park on 29/30th September, visit – https://thewolfrun.com/autumnwolf/

Have you ever done an obstacle race?