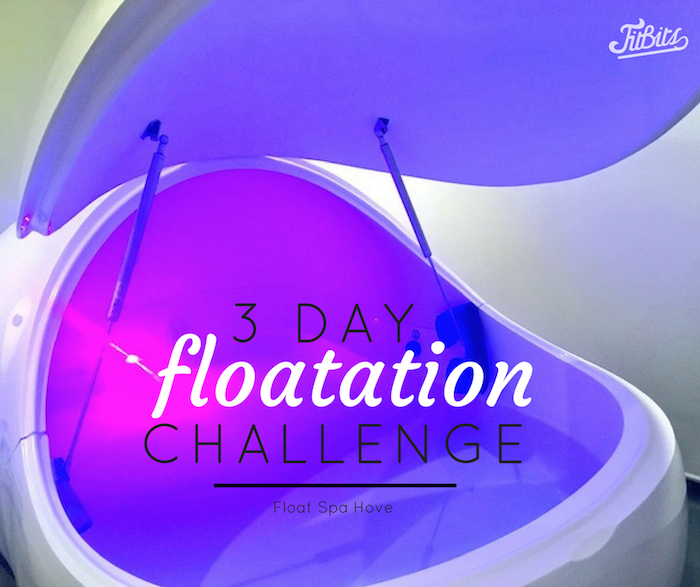 “So Tess, what are you doing tonight, anything good?”

“Oh, I’m going to lie naked in water in the pitch black and listen to nothing but my heart beat for an hour. You?”

It sounds weird when you say it like that, but after completing a three-day floatation challenge at The Float Spa in Hove, I actually can’t think of anything better to do on a rainy evening after work.

Have you tried floatation before? I’ve been dabbling with it since May last year, and am relieved to say that I’m finally starting to wrestle my subconsciousness (or is it consciousness?) into some sort of submission for nearly the whole hour. Sixty minutes is a long time to meditate, let me tell you.

The first time I tried it was enlightening. But boring. Peaceful, but noisy (in my head, not in the pod, you can hear literally NOTHING in there). It was hard work to stay in the zone (or zoned out?) for the whole time, and there’s only been one occasion where I’ve managed that:

The day after Glastonbury, obviously. That was the best float of my life! I think I basically just fell asleep in there as soon as I closed the pod, and boom, an hour disappeared.

You might be questioning why the hell would you pay good money to lie absolutely still and do nothing, but trust me, you won’t get it until you try it. It’s pure weightlessness, requiring zero effort from you at all. Rest in its truest form.

Fun fact: Floatation is a type of therapy referred to as ‘Restricted Environmental Stimulation Therapy (REST)

I don’t think there’s any other situation where you can just fully surrender your whole body like that. The surrendering of the mind is the tricky part, but it’s easier once you turn the light off and the soothing sea sounds ease you gently into the meditation (they play for the first and last five minutes of the hour to help you relax and let you know when it’s time to get out).

A confession – This Girl Can’t

So here’s a confession: there’s a specific reason I binged on three floats in three consecutive days – and it wasn’t just because it was the last day of the Float Spa’s 3-day-challenge. It was because I’m a massive pleb and proper hurt my foot on last week’s 10 mile run (i.e. the one I wrote so enthusiastically about trying to convince myself I *could* do it – #thisgirlcan etc.)

This Girl Can? Well she did. She ran the 10 miles – here’s the proof.
But This Girl Now Can’t. She went and buggered her left foot didn’t she, running through intermittent shooting knee pain on the last mile (because she promised herself she’d do 10 bloody miles) and then couldn’t put any weight on it for the rest of the day.

Come Monday and after 10 hours sleep I was in denial refusing to sulk (positive vibes only, right?) so worked from the sofa and booked a 4pm float to soak up some epsom salts and magnesium into those angry muscles after reading how floatation can be really good for helping to heal injuries.

It was the best decision of the day and while enjoying my post-float sorbet and tea, I excitedly booked the next two days.

Here’s how my 3 day float challenge went, in both my mind and my body:

Foot pain: 9/10
Less than yesterday’s 10/10, but very painful to stand and walk on, with shoes and bare feet. Shit, this is full blown plantar fasciitis isn’t it. No it’s not. Everything’s fine. Don’t tell Chris he was right. Oh God I’m so embarrassed about yesterday’s blog now.

Float 1 – 4pm:
Took a while to get into it but soon managed to let go for nearly the whole hour. Woke up from wherever I’d been about five minutes before the end meditation music started (or was it five seconds? Time means nothing in there). Foot still hurt when I got out, both on bare foot and also in shoes.

Felt awesome afterwards, like I could literally feel my body soaking it all in. Took a cheesy blissed out selfie and cycled home gently on a wave of calm.

But then while lying in bed about to go to sleep my right knee got proper angry (sharp, constant pain) and the left foot joined in with a dull ache so had to get up for some Voltarol.

Foot pain: 7/10
Woke up and pain a bit better. Still hurt when walking bare foot, but more comfy in running shoes (wore them for better support than Converse or Nike Airs). Still pain in shoes though. It’s not PF. Chris is not right.

Float 2 – 11:30am:
Easier to relax into it this time. Had a busy morning of work (started early) and rewarded myself with a midday float break. Fell into meditation earlier, and for longer, and on getting out of the pod noticed zero to minimal pain on bare foot. Can now walk properly with shoes on without limping (can feel it but it doesn’t hurt like it did yesterday).

Carried that post-float calm with me for the rest of the day. And noticed at work that I wasn’t using my wrist brace for my RSI. This is MASSIVE for me as I’ve been so dependent on it for the past few months.

Foot pain: 8/10 in the morning, a little more than yesterday, but eases throughout the day.
Also hurts when sitting in the morning, but only 3-5/10. OK when walking in shoes, but can definitely feel it’s not OK to run.
Pain almost gone by evening.

Float 3 – 6.45pm
I was looking forward to this all day, probably because it’d been a busy day in the office for a client and I was ready to shut down. Spent another whole day at work typing without my splint 🙂 Can feel the RSI lurking, but not proper painful so no need to support with the splint – maybe this is strengthening it finally?

My train got in earlier than expected so I pushed my 7pm float forward a bit.

So ready for my day 3️⃣ #floatation @FloatSpa to conclude my 3 day challenge. 🙏🏼 Something switched today, I’ve been looking forward to it for hours 🙌🏼 Do you #float?#meditation #wellbeing #mindfulness #meditate pic.twitter.com/kU5t06NEoV

But when I got in the pod the music didn’t start for a good few minutes, and I found it hard to start to relax as found myself waiting for it.

For some reason my heart rate was quite high this time, and I found it very hard to slow it down (and quieten it!) to relax. I must’ve gone into meditation eventually as I woke up just before the music started at the end.

Never had a float where my heartbeat was so loud – I think sensory deprivation must be the only situation where you can actually get annoyed at your own heart pumping.

Wrestled the mountain bike home (new beautiful roadie is NO WAY getting locked in town) and went to bed early again.

When I left the spa on Wednesday evening I was pretty sad I wasn’t floating on the Thursday. It’s made me think about upping my membership from the one float a month to more to get real benefit from it.

My favourite float out of the three days was actually the 11:30am one as it forced me to get lots of work done in the morning and then carried me through the day on a wave of calm. I think in the future I’ll try more lunchtime floats, yoga and meditation around Brighton 🙂

Foot update – it still hurts a bit, but nothing like it did. I pulled out of the Winter Run just to be safe and it was definitely the right decision. The pain almost went away 100% but then I volunteered at parkrun and walking some of the course made it hurt again. The pain has changed now from the dull ache on the heel and along the outer side of the foot to quick stabs up the back of the heel near the ankle – only occasionally. I can stand and walk bare foot but I know if I was to run it’d hurt.

I’m hoping it’s not gonna turn into full blown plantar fasciitis and I’ll be back running in a couple of weeks and mayyyyyyy be able to still do Brighton Half.

RSI wise, I’m in the midst of a revelation at the moment. After months and months of not being able to type without my splint, I’m pretty much pain free, as long as I take breaks and am mindful of my positioning. That means not using my right hand at all on the track pad, and moving my whole hand to reach keys instead of bending the wrist.

I actually lost my splint last weekend – the cats have probably eaten it – but because the pain hasn’t been bad I didn’t have to look for it. So I’ve been typing mostly pain free without the brace for a whole week. MEGA.

I don’t even care about my foot now, the RSI victory is worth a hundred achey feet! 🙂

If you’re in Brighton (or Hove actually) and fancy trying floatation get down to the Float Spa in Hove.  This is not a sponsored post, I pay a discounted rate for my membership to write about my (honest – as always) experiences.

Have you tried floatation?

And have you ever hurt your foot like I have / do you get RSI? Any advice much appreciated!