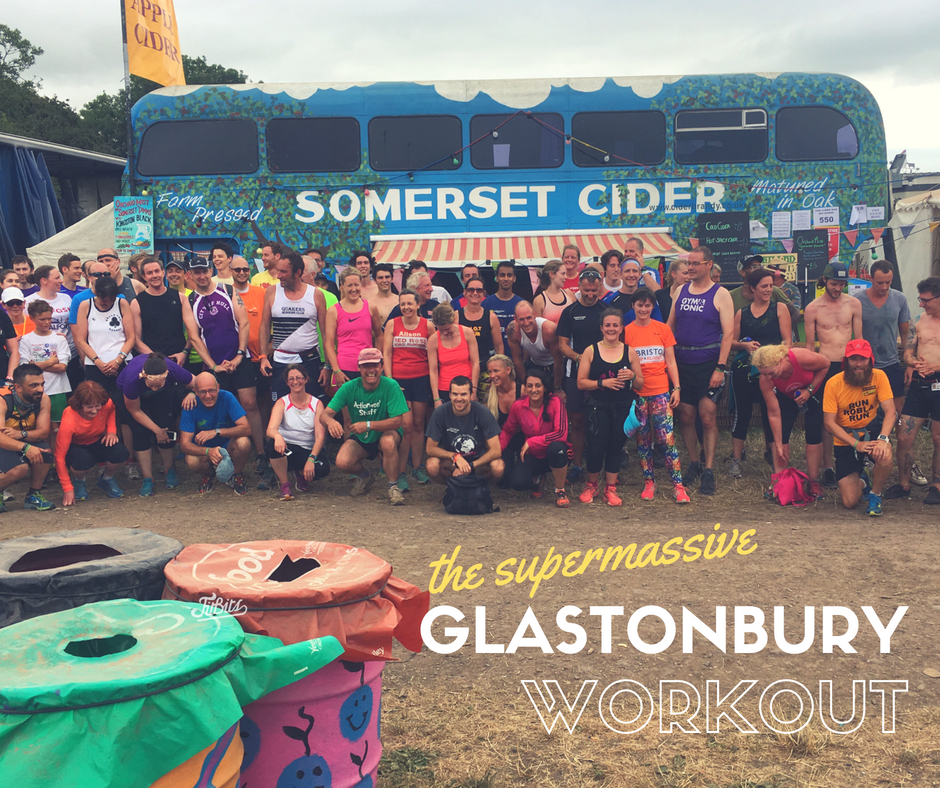 One of the true highlights of my seventh Glastonbury was dragging my already shattered body down to the Raclette stall on a drizzly Friday morning to shovel a feck load of cheese into my face.

It was that non-rain kind of drizzle, the stuff that sits on top of your hair. The type that that in any normal circumstance would be no problem at all but at Glastonbury, you know if it carries on you’ll be swimming in mud within a few hours.

My legs were already knackered from two days’ walking around the site and kicking off Thursday night dancing to some proper 90s bangers courtesy of Rhythm of the 90s (If you haven’t seen this band and you have a love for 90s cheesy dance music, sort it out).

So, yeah. Non-rain rain, knackered legs, and the second hangover of the week. It was definitely time for a Raclette breakfast.

For those of you not in the know, (I wasn’t in the know until that moment, what the hell had my life been about until then?!), Raclette is delicious, melted cheese poured onto potatoes or fries. Or in the case of my Friday – sausage, beans,  chorizo, bacon and potatoes.

It was the absolute shiz, nothing less. I’ve been fantasising about it ever since and I’m really upset I didn’t get a photo to Instagram it. I have literally just signed up to Brighton Cheese Fest to scratch that itch. Google it. 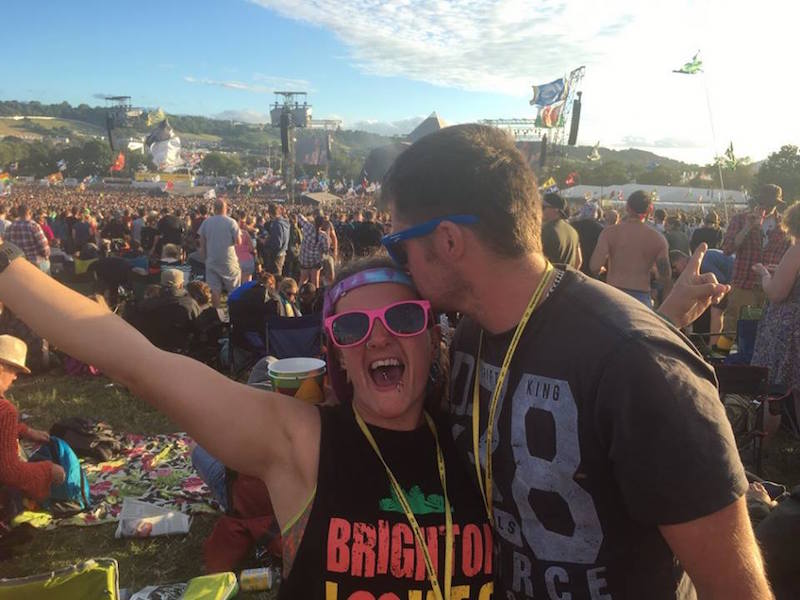 The best one yet?

I do say this every year, but I really do think this Glastonbury was our best yet, for many reasons:

👌 A WICKED line up – Radiohead headlining the Pyramid Stage will be an experience that stays with me forever. A bit like Massive Attack in 2008, or Blur in 2009. This year Elbow special guesting the Park stage, Alt J, DJ Shadow, Biffy Fucking Clyro and Roni Size smashed it too, but Radiohead, man.

For a minute there, I lost myself. 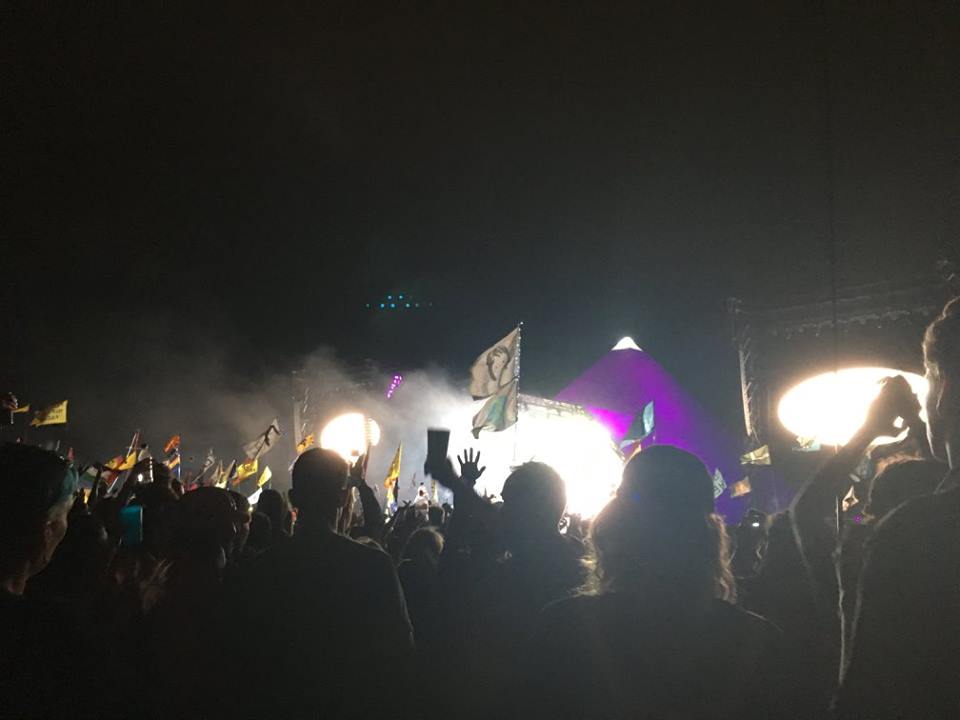 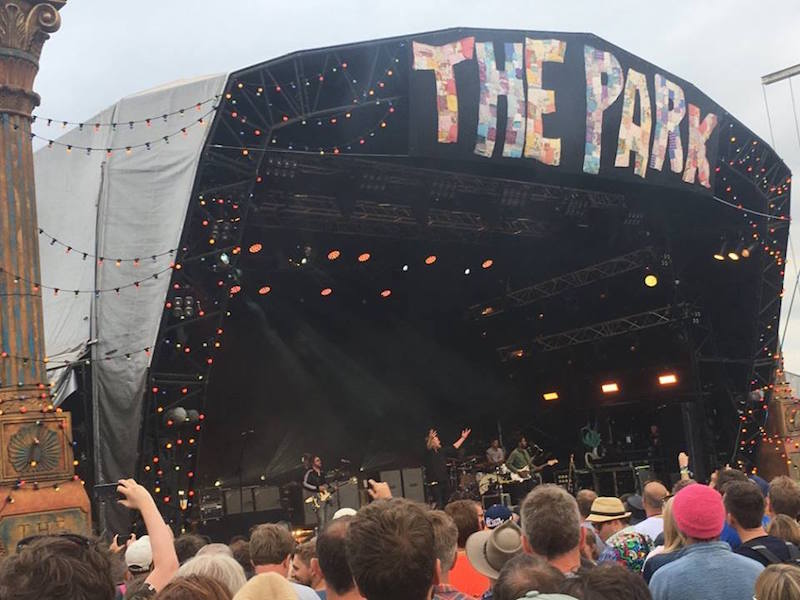 👬👭  WICKED crew – me and Chris used to go on our own and hook up with friends while there but now we camp in a big crew which makes it so much more fun.

😎  NO MUD! Nothing, nada, zilch. There must’ve been something in that glorious Raclette as the non-rain rain swiftly buggered off once I’d successfully inserted it into my face. I’ve never had a Glasto without mud. It really was exceptional. 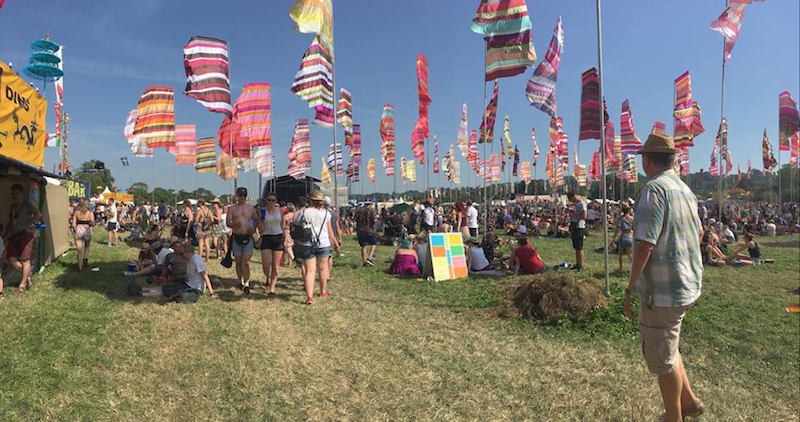 ⛺   BEST campsite ever. Me and Chris camped in the Tuesday night queue and were one of the first on site for 7am so had our pick of where to camp. We chose Row Mead, with a direct view of the Pyramid Stage in case the crowds were too big for Radiohead. (Spoiler – they weren’t, because evidently not everyone gets it). 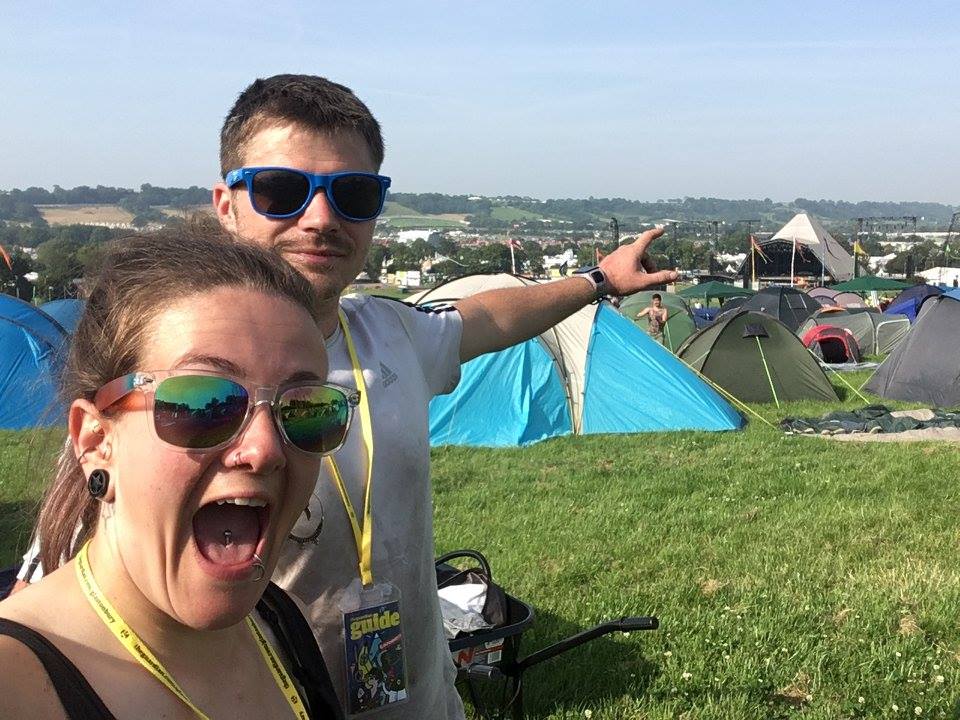 🚽 My own ShePee! I got sent a festival survival pack from the guys at Push Doctor.   Amongst the deodorant, dry shampoo, portable charger, baby wipes, a (not needed) emergency poncho and other goodies, was my very own ShePee to use the female urinals! I’ve been using ShePees at festivals for a few years but to have my own one meant no more hovering precariously over the long drops, or using most of my tissue stash cleaning up after the boys before using the toilet!

If you haven’t tried it yet girls, get on it. Life changing.

Got a festival coming up this summer? Read Push Doctor’s festival essentials guide.

Anyway, the point of this blog post isn’t to congratulate myself on the excellent time had whilst swooning over a soundtrack to my teenage years, but to tell you about the supermassive, neverending workout that is Glastonbury Festival.

On the Thursday morning I kept the promise I made to myself when I packed my trainers and joined the annual run around the site with the guys from Actionwork. It was a massive group this year, and a great run because it hadn’t rained AT ALL.

Read my blog from the last time I joined this run at Glastonbury in 2015.

A slightly respectable 3am bedtime on the Wednesday meant I wasn’t too fragile to make the 9am start, and even bumped into a familiar face from Brighton during the run! Small world guys.

We ran a loop of the site taking in the different stages, and had the obligatory trudge up the top of the hill for a photo, which was a bit more effort than it needed to be due to the amounts of cider in mine and a lot of other runners’ bodies. 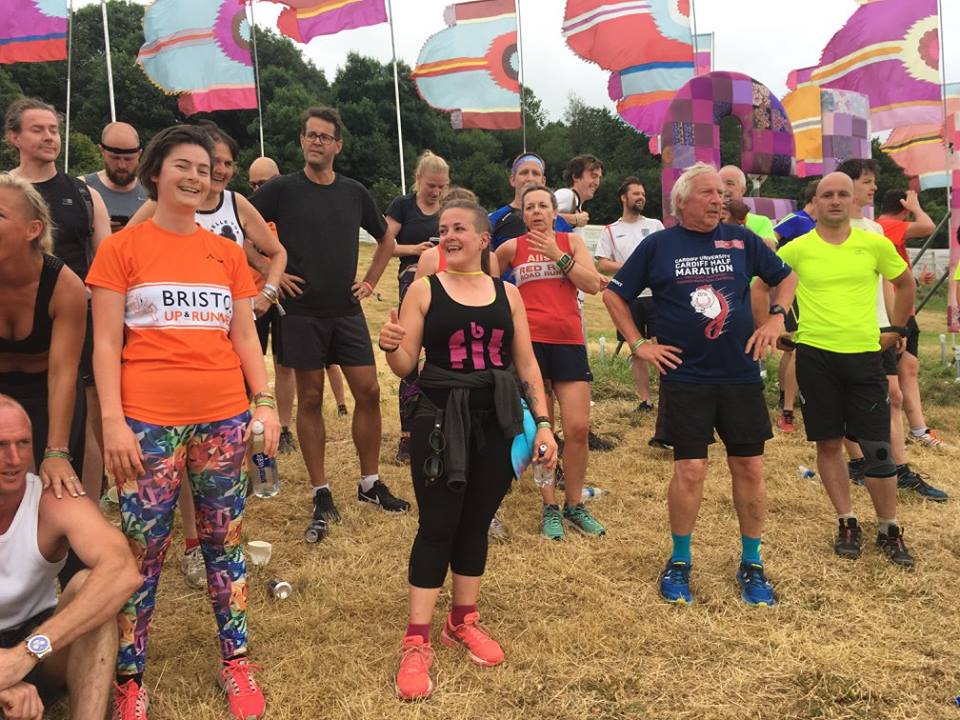 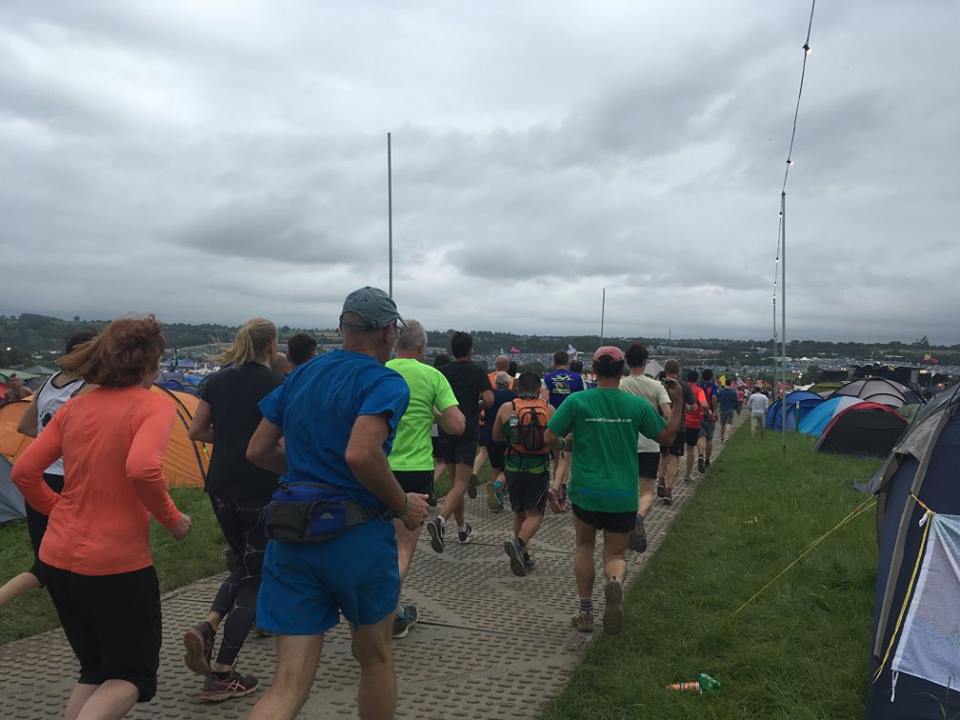 It’s a bit big (that’s what she said)

Glastonbury’s the size of Brighton, by the way. And Manchester, and a good chunk of central London. 900 acres in total.

More than a mile and a half across, with an eight and a half mile perimeter.

This year was the first time I tracked my steps, and I’m glad to say the Raclette, (and cider, chips, falafel, mac & cheese, pulled pork in Yorkshire puds, toasties and whatever else I ate during those five days) was more than earned.

I walked / danced between 16-20 miles a day, mostly in sandals or Air Max’s as there was NO MUD. It was bloody marvellous.

No wonder my legs hurt!

A total of 92.96 miles / 236,789 steps covered between Tuesday at midnight to Monday when we left the site. The runner in me is now really annoyed I didn’t make that up to a round 100 miles, but hey ho. 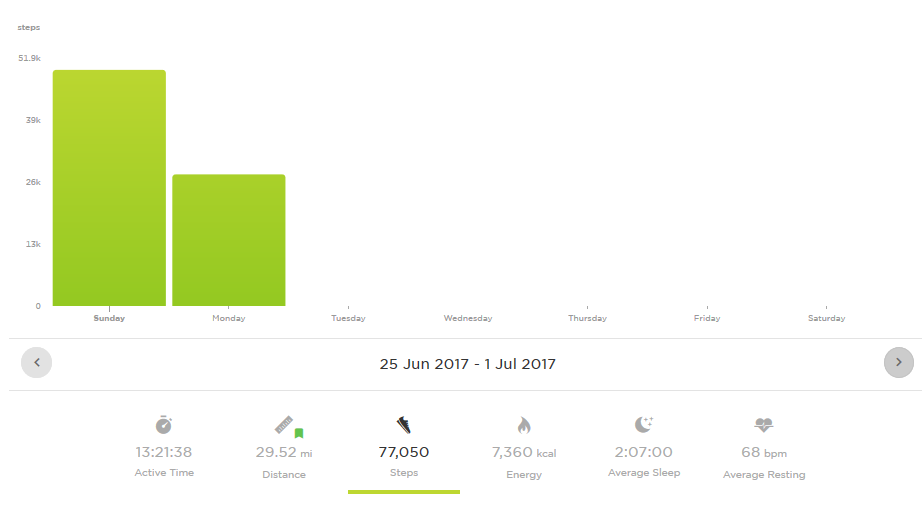 If you break it down into the hours in each day you can see I totally smashed it as the weekend went on – both in steps and miles walked / danced, and also sleep, which progressively declined into Monday morning.

I always knew we covered a lot of distance at Glasto as my legs are always achey AF, but I honestly didn’t realise it was this much.

The supermassive Glasto workout is real!

Camping in the queue overnight on Tuesday (remember this is midnight to midnight), then a quick snooze, and walk to site (1mile @ 7am) to put tents up and wait for the others to get through the gates.

I took my watch off once we started pitching so TomTom saying I got 11 hours sleep is BS. 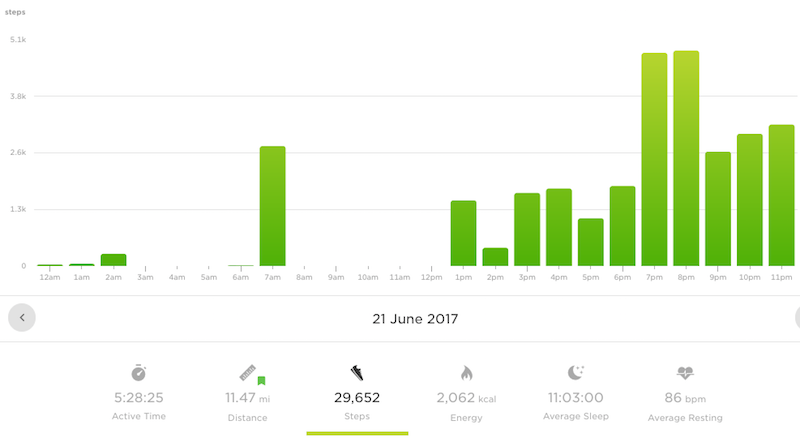 A Casual 16.25miles boshed out on the second day after a respectable 4.5hours sleep – bonus! Lots of wandering around the Park area and small bars in search of music and cider. 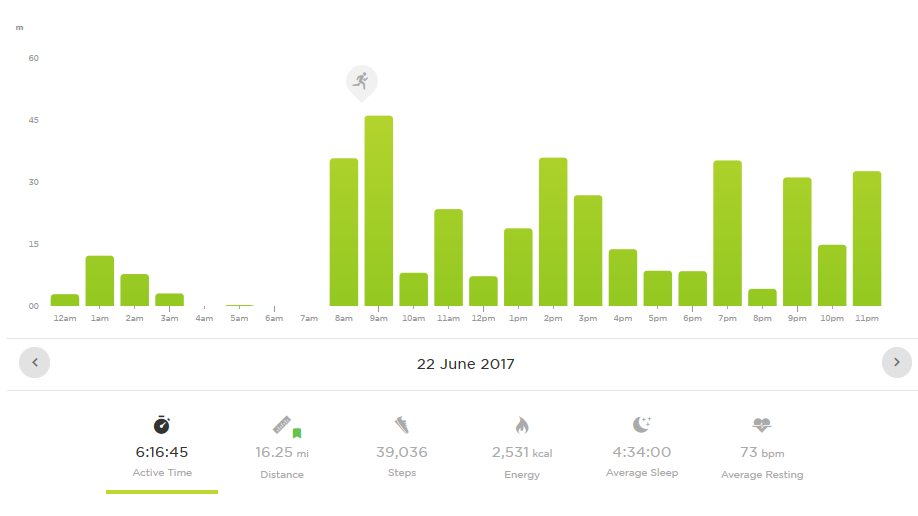 The dips throughout the day were when we stopped to watch bands – Glass Animals, Elbow, RADIOHEAD. Aaaaaaahhhhhhh. 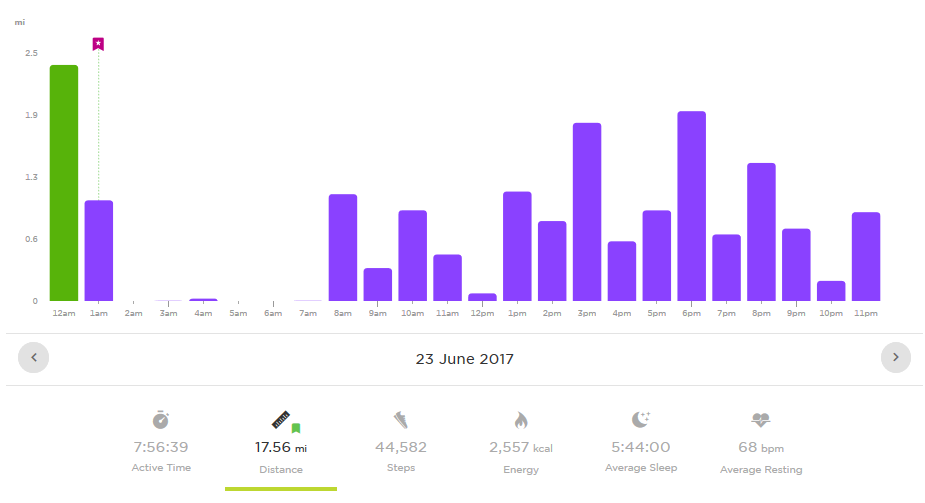 A stellar performance from midnight to 2am then I obviously gave in and went to bed! This was the day I ended up paying for the most as someone let me open the gin… 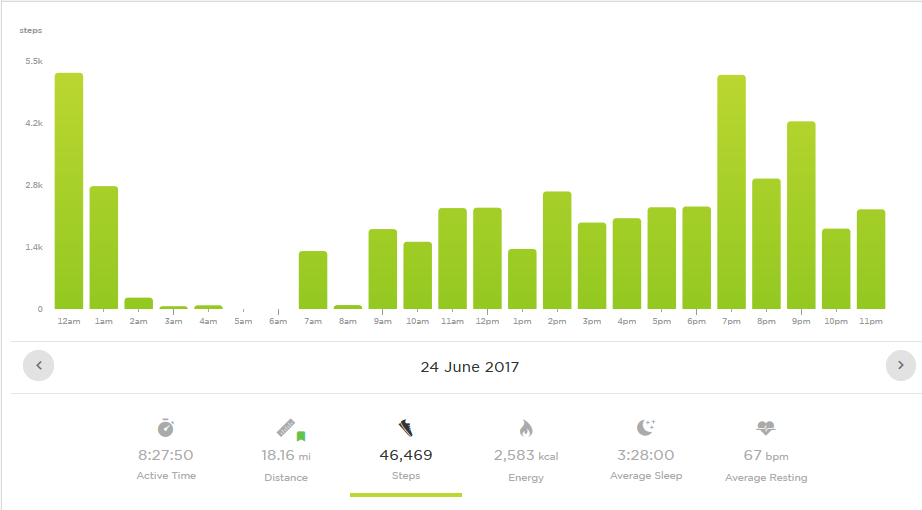 Very nearly 19miles walked / danced – the climax of the weekend.

Blatantly killed it after Alt-J headlining the Other Stage (yes we missed Foo’s, yes, it was intentional). Noisia at Arcadia sorted us out before an impressive 1hr46 sleep on Saturday night.

I was suffering on Sunday morning but was eased back into the game with Jamie Cullum on the Pyramid and some reggae and dnb in the Dance Village (now called Silver Hayes) as well as the soothing sounds of Rag n Bone Man. And CHIC before BIFFY FUCKING CLYRO! 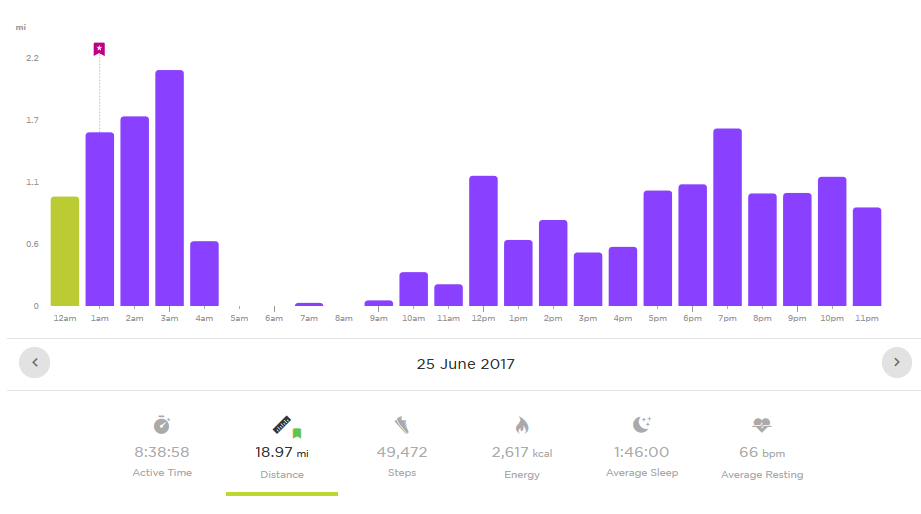 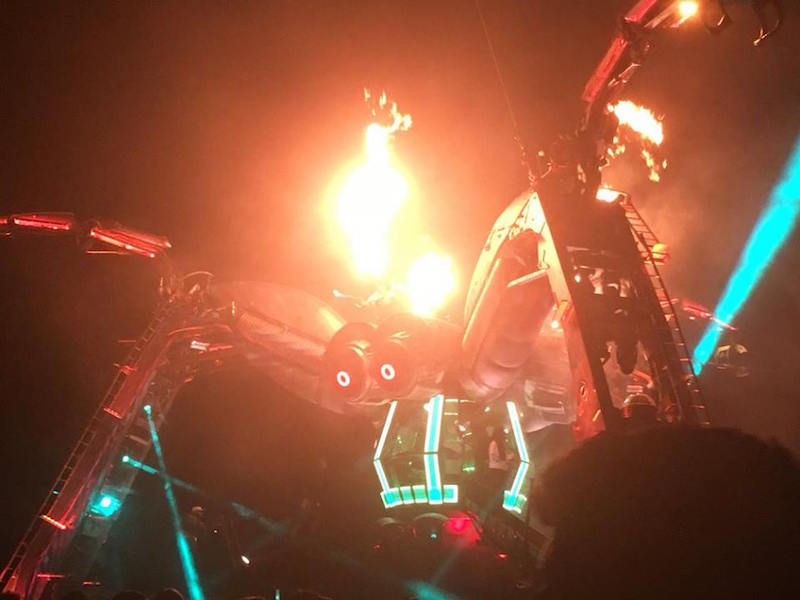 There aren’t many rules at Glasto but one of them is that on the last night, you go hard, and only then, do you go home.

Justice on West Holts and Roni Size(!) at Arcadia with a wander around Shangri La made sure we were law abiding Glastonians, and with a respectable 2.5hr sleep before packing up, we left the farm, and left no trace. 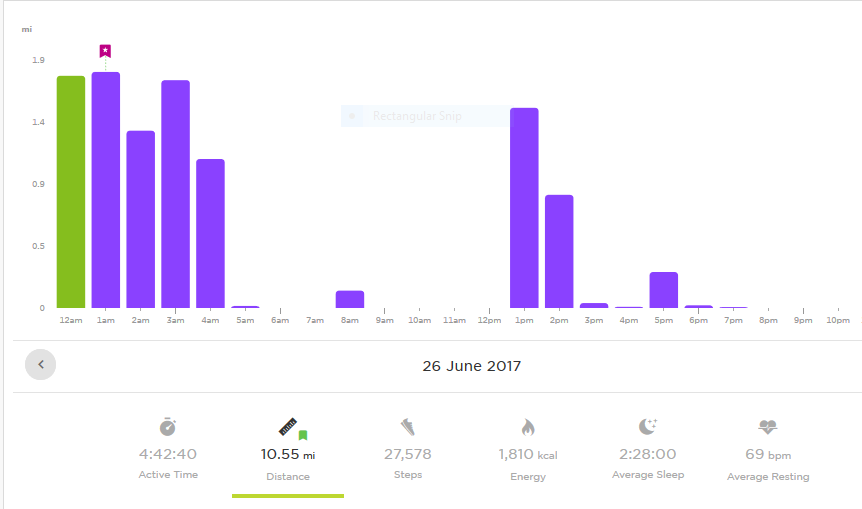 See you next time, Glastonbury, my happy, happy place! 💚

Do you run and track your steps at festivals?