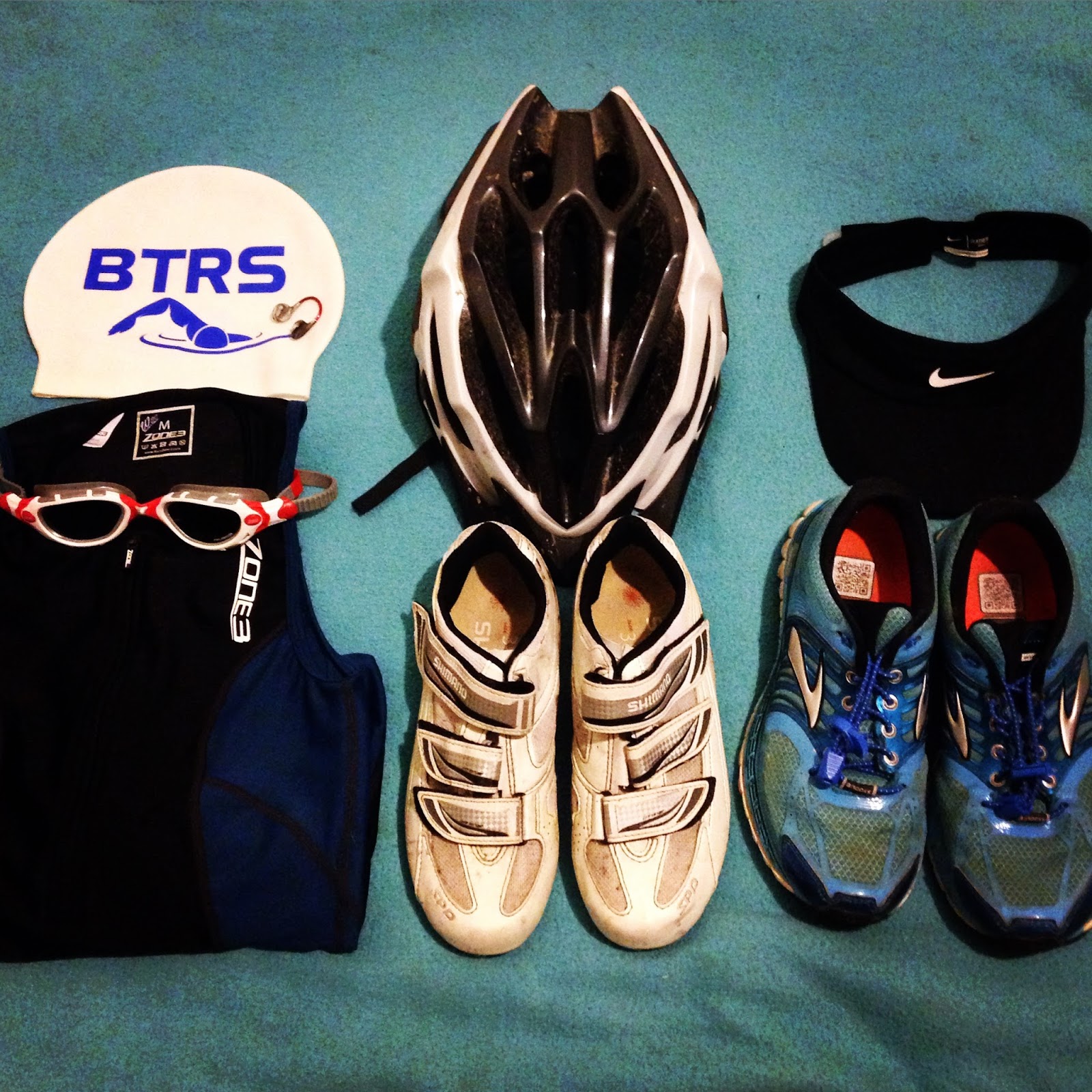 “Guys, this is an open water triathlon swim, we’re not sending

I wasn’t the only one who stopped hyperventilating for a giggle when the race marshall said that. It was 12:59pm and the Novice distance Diamond Tri competitors were in the water. Some holding onto the pontoon (me), some swearing at the reeds/‘terrifying swamp demons‘ that snaked around their water-treading legs (me), some calmly bobbing around laughing with friends (not me, I was too busy holding on for dear life).

Race day came round all too quickly for me this time. Having only started training for this nine weeks ago, not followed a set training plan and *still* not being able to swim the full 400m required distance in one go, my nerves were on another level on the drive up to Eton Dorney from Brighton.

Those who follow me on Twitter and Instagram will have seen me at various panic-stations throughout last week, flailing about whether Vaseline or baby oil will do for under my wet suit (baby oil worked fine), whether I’d be able to see in the water (sort of), whether there’d be buoys and ‘lanes’ clearly marked out in the lake (yes). Whether I’d actually be able to finish the swim (read on to find out!)

I spent most of the drive up running through problems in my head and decided to have a common-sense word with myself and write down my fears, and then write down how I’d deal with them if it happened, so I had a ‘plan of attack’, so to speak.

My lovely (and very patient) husband endured continual questions, tantrums and speculation as to what the day would hold, but when we arrived at Dorney Lake I tried to shove the fear aside and enjoy the buzzing atmosphere.

With the sun shining, no real wind to contend with and a busy race village teeming with activity, excited triathletes of all abilities and lots of people in support, it was hard to still be so scared.

The water even looked, dare I say it, inviting. 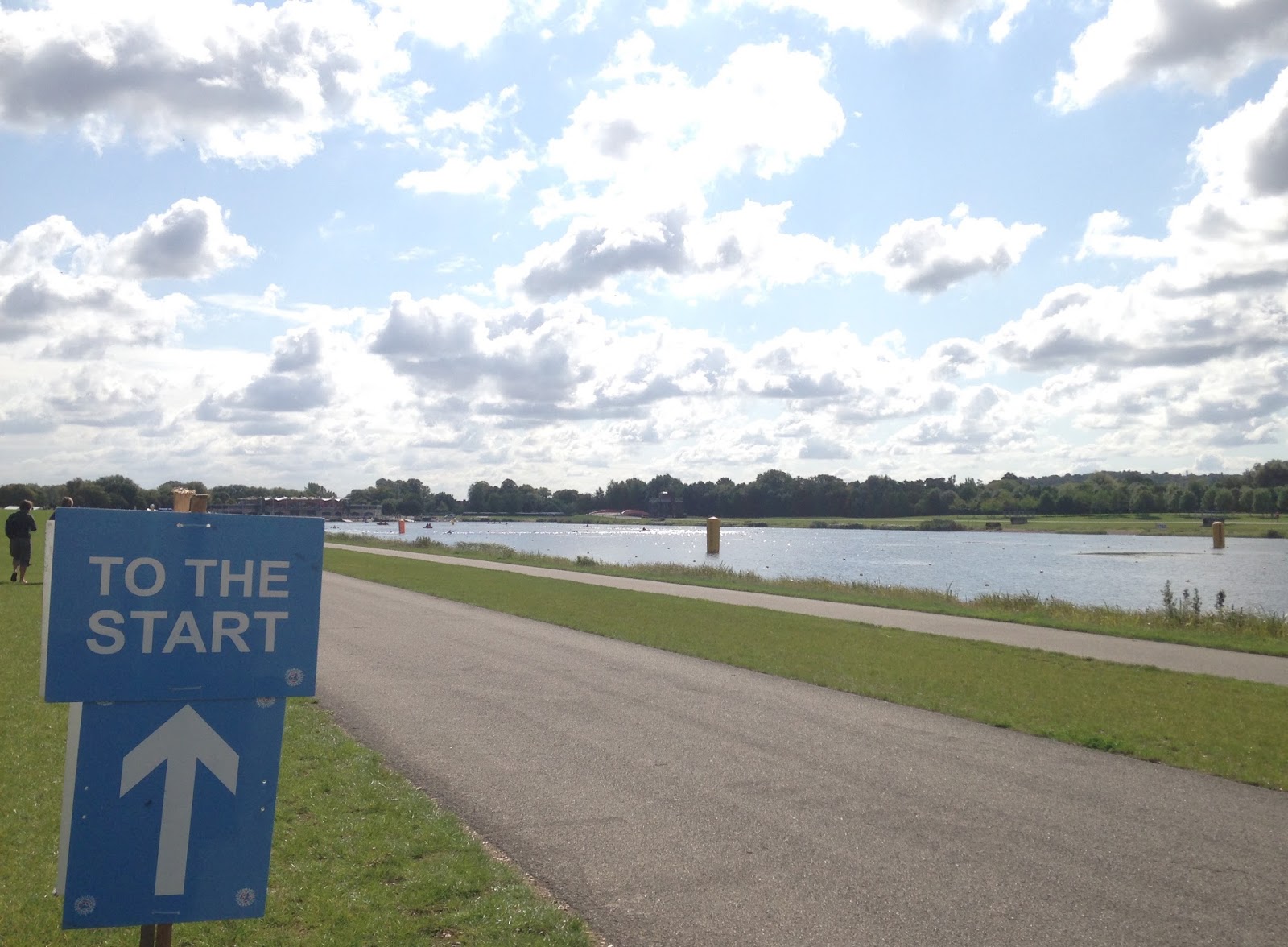 All was going well until I went to get changed into my race kit, and in the changing rooms I got chatting to a lady who’d done the 2km swim earlier and was now baby oiling herself up for the Novice distance tri. She told me all about how it was ‘really difficult to swim through all the reeds’ in the water, how she got tangled up a few times on her swim, and how she needed to ‘really pull through’ to get past.

Cue the instant panic and dread that I thought I’d left in the van.

I managed to hold it together until I got back outside to Chris but as soon as I saw him the waterworks started and I couldn’t make them stop. There I was, a 29 year old (not-so) grown woman, dressed in a shiny new trisuit and wetsuit quietly blubbing in public.

It’s just as well my uncle turned up then too so Chris had support in calming me down, telling me it would only be reedy on the ramp and in the shallows.

After pulling myself together I went to rack my bike and suss out transition, and reminded myself of my point 1) action plan from earlier –

Before I knew it the Novice distance triathletes were being called to the water for the swim so I was all out of worry-time and went into let’s-get-this-done mode.

As I approached the water I overheard a few other people just as nervous as me which was really reassuring, although I definitely wanted to get in the water as soon as possible to acclimatise and calm me down.

I can honestly say, I’ve never had pre-race nerves this bad before, apart from my boxing fight last year, that was pretty much on the same scale in terms of fear. Which is mental because this was only 400m swimming! I swim all the time! Strange how your mind can make your body react. 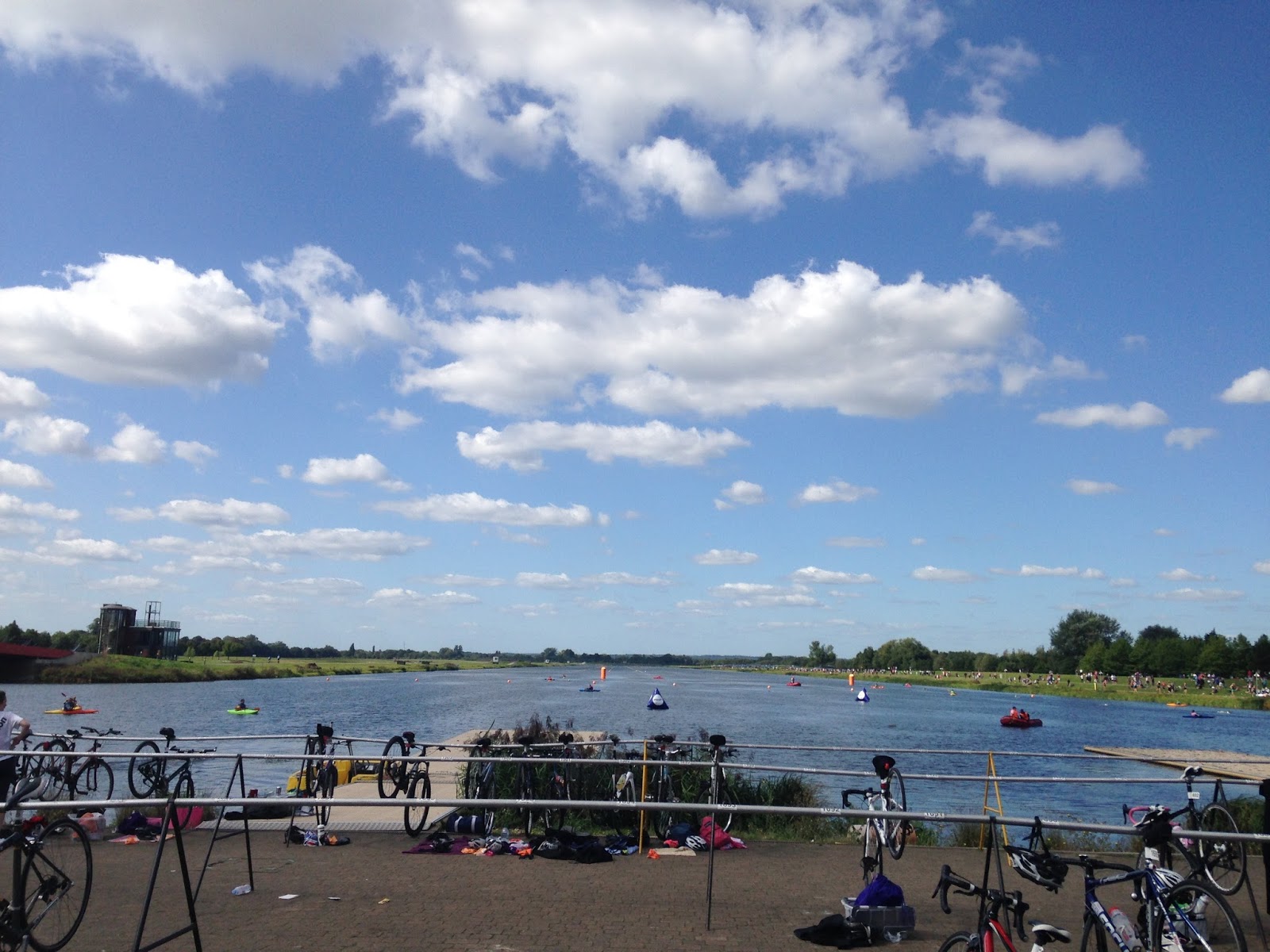 The race starter must’ve noticed how nervous we all looked and as well as reassuring us that all we were doing was going for a swim, not going to war, he let us hang on to the pontoon and explained that previous swimmers had cleared a path through the reeds so we should get through OK.

The klaxon went and of course, I promptly moved to the side of this path, negotiating a tangly underwater forest for the first few metres. At first I had swimmers around and in front of me, I could see the kicking feet of the group ahead, and I settled into my slow and comfy rhythm that I’d practiced so much before. The feet soon disappeared into the distance but I plodded on.

As soon as I started to actually swim the fear was gone and I was able to concentrate on the task at hand, so although it was me and just a few other stragglers, I wasn’t scared so actually started to enjoy the challenge. 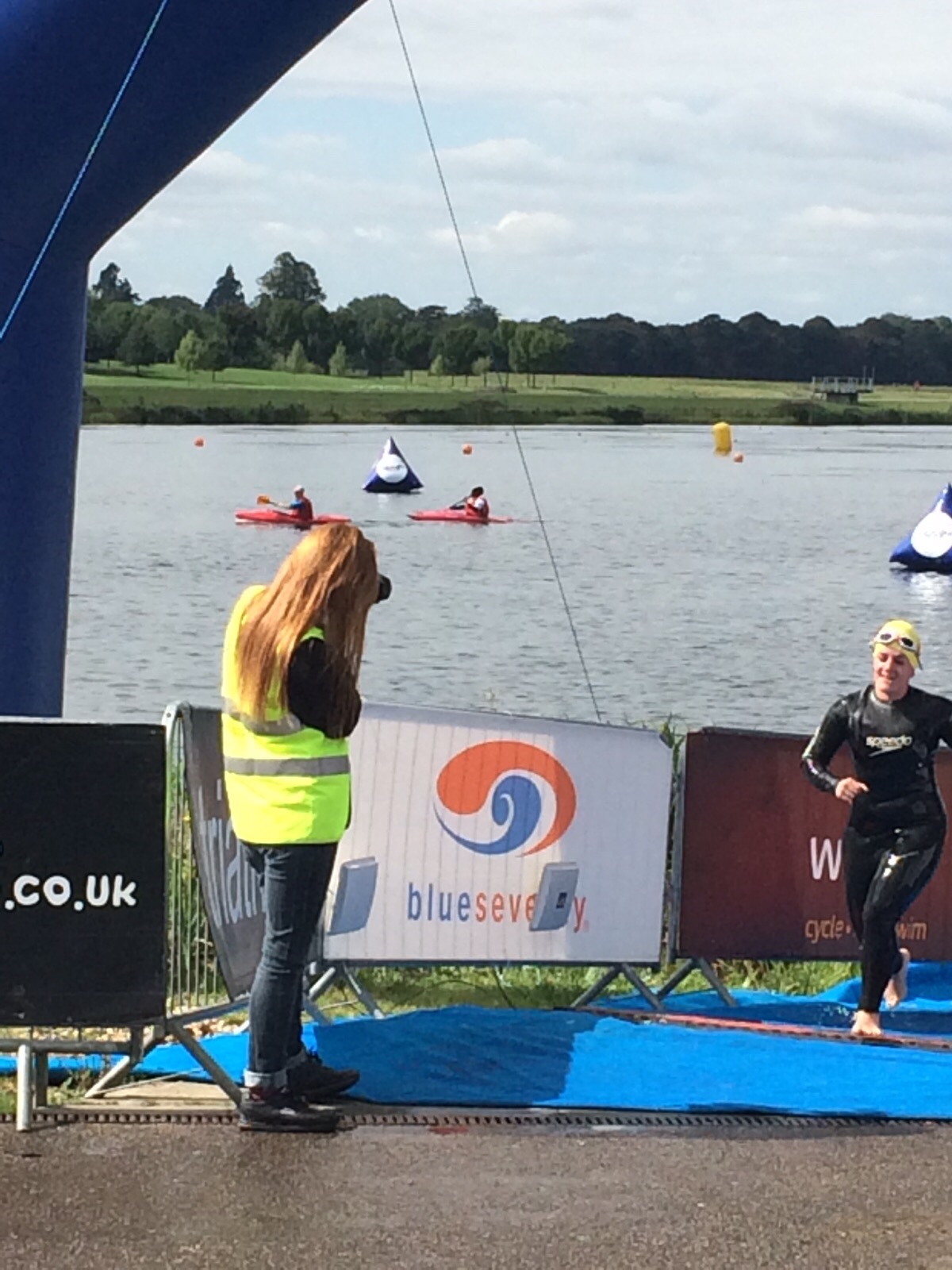 Kayakers stayed near and every now and then, probably about five or so times during the whole swim, I stopped for a breather or switched from front crawl to some sort of undignified, flappy doggy paddle/water treading dance, just so I could check myself and get back on course. I took the inside ‘lane’ but went a bit too inside and had to come back out a bit to go round the yellow buoys.

On the second corner another swimmer pulled over and stopped, saying he’d had reeds tangled round his ankle pulling him down for ages – I asked him if he was OK but then a kayaker turned up so I went on my way, glad I’d only got tangled momentarily earlier. I dunno if he overtook me as by then I was too concerned with getting to the finish.

I tried to swim long, and with grace, lifting my elbows and turning my body to slice through the water. I tried to not kick too much but to be honest, I kicked for England at the start and as I got tired my nice glidey-elbows-up stroke got a bit wide and slappy.

I think I said ‘fuck’ a few times (i.e. on nearly every breath) on the home straight when I kept veering off to the right instead of towards the ramp. I thought I was the last out but Chris said I had about six behind me – not that it mattered though, I was just really excited to still be alive and knew the race was in the bag now.

I reached for the outstretched hand of a very friendly marshall, manically shouted to him that I was still alive and ran off to collect my bike.

This was the part I was really looking forward to as it’s my strongest discipline. I knew if I could just make it to the bike I’d go out hard to catch up some fast swimmers and regain some position. I faffed a fair amount in transition to get comfy and pegged it out of there in a flurry of excitement.

I clipped into my pedals, cranked up the gears nice and heavy and went all out for the first couple of km, overtaking as I went. Some cyclists prefer high cadence but if I need to go fast, quickly, it’s into heavy gears pronto and quadzilla to work for me. 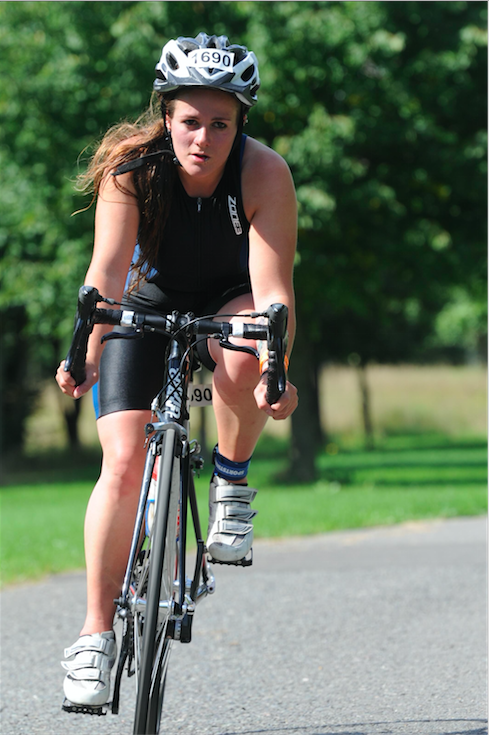 This was my first race on my trusty road bike. I’ve had her since last June and been dying to see what she can do on a course, especially at flat Dorney after my 2014 Winter Duathlon bike fail (don’t blame me, blame the hybrid).

The thing is, I went out a bit too fast, and had a really tight chest for most of the bike course, easing only when I slowed to drink and pose for the photographer in the last few km.

Coming into transition a young lad fell off his bike as he unclipped so I stopped to make sure he was OK before going in myself. He was a right trooper, had a one-second cry, picked himself up and ran on. DUDE. 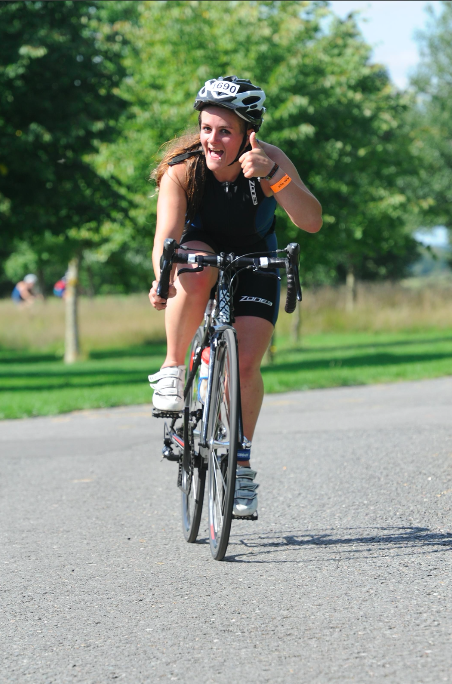 Even though it was only 2.5km the run was pretty uncomfy to be fair. It always takes me about 15 minutes to get settled on a run, so heading out for a fast couple of k after smashing it on the bike didn’t do much for my lungs.

The course was a straight out and back along the river, with the turn point way too far away for my liking. (1.25km to far to be precise). I passed a few runners and tried to settle in what rhythm I could, got overtaken by a fair few speedy people, but it was a great atmosphere, with the collective knowledge that it was the last push to the finish.

I stopped to sort my laces briefly on the home straight (having tried out the Nathan Lock Laces from my Runner’s Need #summerrunnin goody box, I’m not sure I had them tight enough), and another runner passed me and said ‘keep going’. I think he thought I was doubled over in pain or something, which might not have been too far from the truth, it wasn’t a comfortable run in any shape or form.

I was playing cat and mouse with one of the Disney triathletes on the way back to the finish – I’d overtake her, then she’d overtake me, and when we got near the end and heard the crowd going for it (my cheerleaders included) we both picked it up for a sprint to come in strong.

I got in front, just. If she’s reading this – well done, thanks for playing! 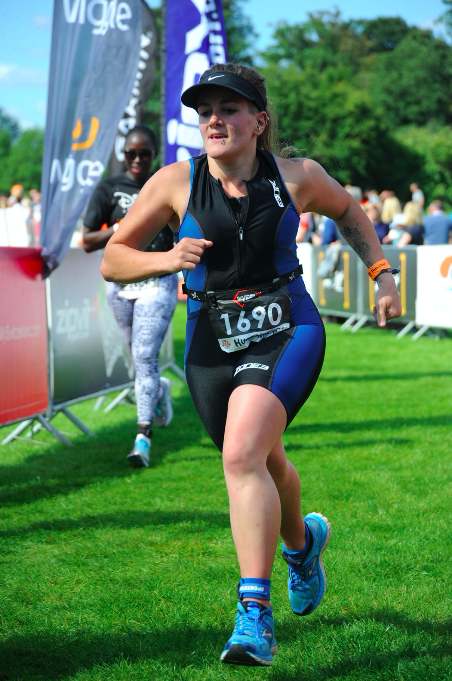 I’m really chuffed with my time, really glad to get my first tri (and the fear) out of the way so I can build on this over the winter and get strong for next season. Can’t believe how scared I was about the swim, seems so stupid now. That shit was real though.

I’m not running a Spring marathon next year (unless I get into London), so am excited to spend the winter going heavy in the gym, lots of swim and cycle training, and running FAST so I can smash some PBs and see what kind of triathlete I can really be.

Oh, and I *may* have already signed up to my next tri… this Sunday at Falmer, out of sheer FOMO. I’m blaming my BOSH Tri and BTRS buddies. Have also convinced hubs to sign up too, (his FOMO got the better of him after supporting me at Dorney).

Couples who race together… 🙂

What was your first triathlon experience like? Do you ever get as nervous as I did before big races and if so how do you deal with it?