“Are you ok? Can you see properly?

Don’t worry if you feel sick – that’s just the adrenalin leaving your body.”

Just another normal Sunday night then.

An experience “like no other” is how it was promised on the website, in the first meeting, and all throughout training. When I came back from the gym battered, bruised and in tears from being punched in the face too many times, I reminded myself of this, and looked forward to the climax of fight night with anticipation, fear and determination to learn more and get stronger.

Ladies Ultra White Collar Boxing – you were everything you promised and more. 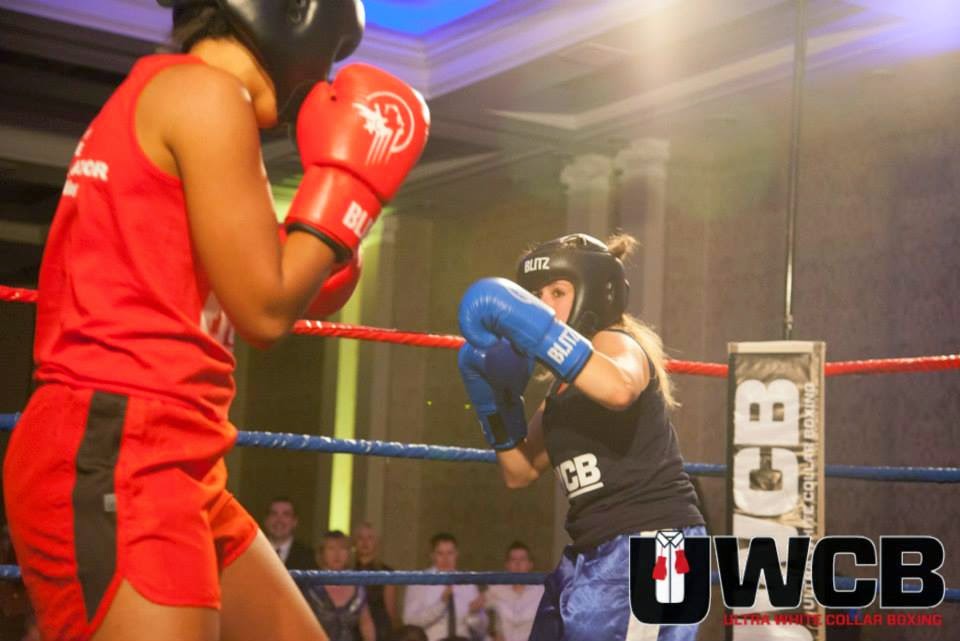 Feel the fear. Then do it anyway.

I started the eight weeks training maybe a little too confident in my own fitness and ability – after all, I’d been a regular boxerciser for a number of years – how hard could real boxing be? Quite bloody hard, it turns out.

But what an incredible experience.

As the weeks went on I took everything I could from the two free weekly sessions, extra classes and PT, and walked into that ring last Sunday with my head held high, ready for the fight or flight reaction in my body to decide how it was gonna go.

I was excited, terrified, and proud to have got to this moment, determined to soak up every single second, win or lose. 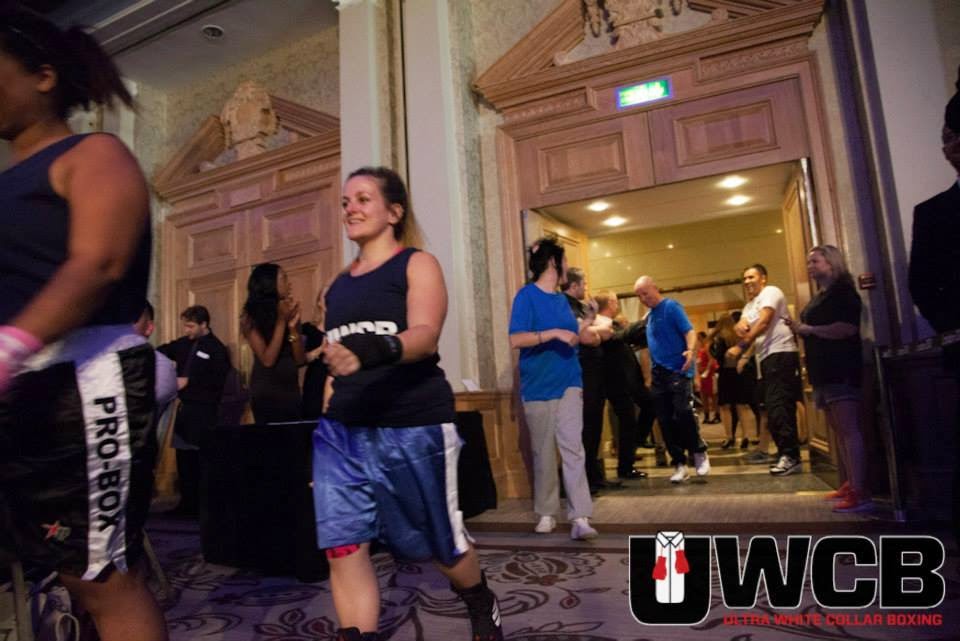 Everyone at the gym said that stepping into the ring for the first time is the most amazing experience in the world – there’s nothing like it. They weren’t wrong.

All day I’d been bouncing off the walls, so excited for everyone to arrive and the fights to start – my fight was last, so we were closing the show. As the day went on and I watched my new friends battle it out in the ring, the nerves started to take hold and the adrenalin pumped through my veins.

When the time came to warm up I felt like the day had disappeared so quickly – was I ready?

I haven’t practiced this combo, I haven’t warmed up enough – is 15 minutes enough? What was that thing Mark taught me to do if I get pushed onto the ropes? I need to practice slipping more. I can hear the crowd, everyone’s going mental. Amy’s gone out there. She’s doing a bloody victory entrance dance already – what am I gonna do to look cool dammit?! Just walk out, head held high. My music’s playing. This is it.

Bowl it out there. You got this, whatever happens, the moment’s yours.

Fighting my heart out

My opponent, and new-found friend in training, dominated me from the first punch. Within five seconds of the bell ringing at the start of the round she’d landed a hefty combination of punches to my face and backed me against the ropes. 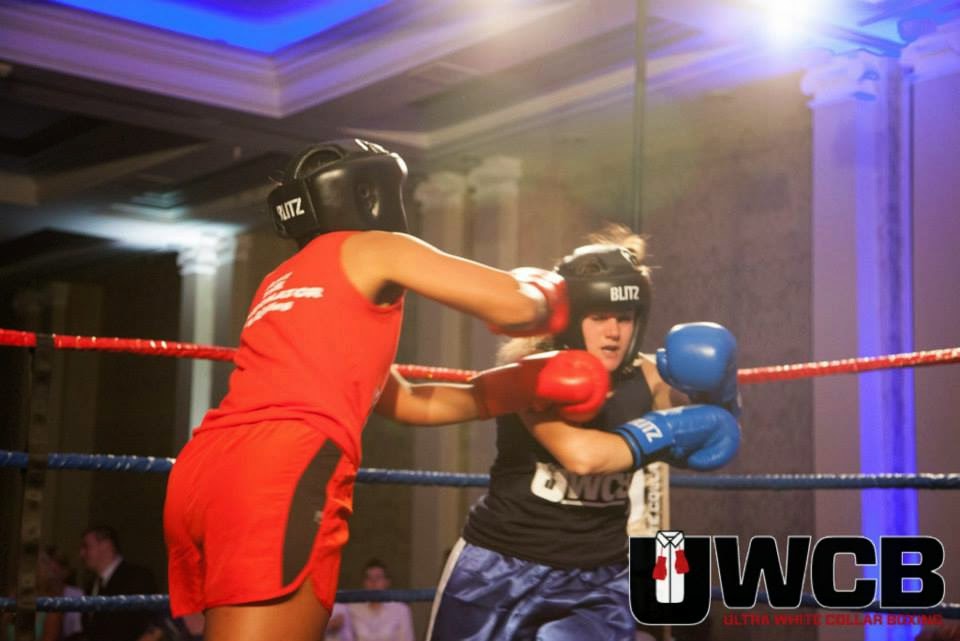 I realised then that this was much different to the sparring I was used to, and knew I had to fight my heart out.

By the end of the first round I was absolutely knackered. My strategy to go for the defence in the first round and let her knacker herself out didn’t go to plan – she was coming from all angles, and I had to attack back. I had to give it everything. 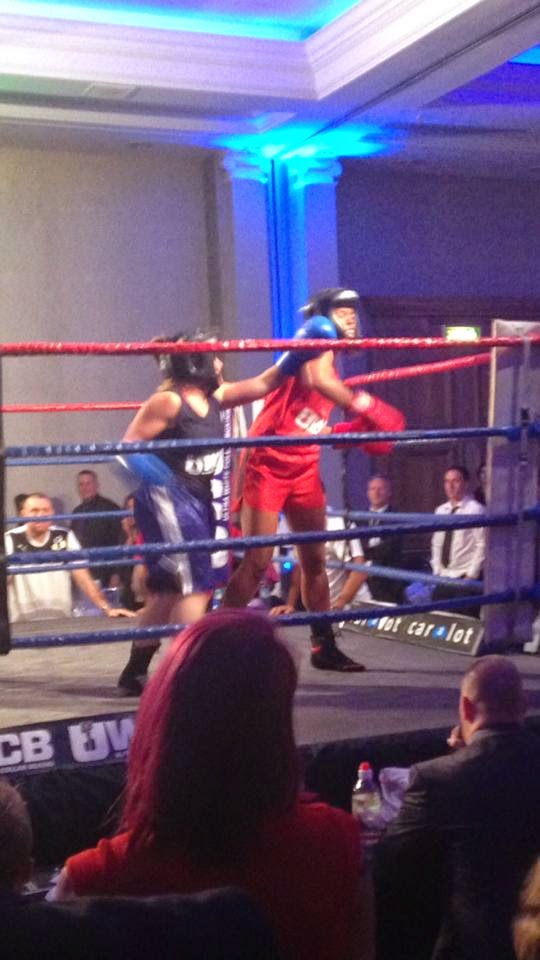 A week previously, another boxer at the gym told me to completely relax in the one-minute breaks between the rounds. He said to let my body go completely floppy and let myself recover as much as possible.

I didn’t have to try, it was all I could do. 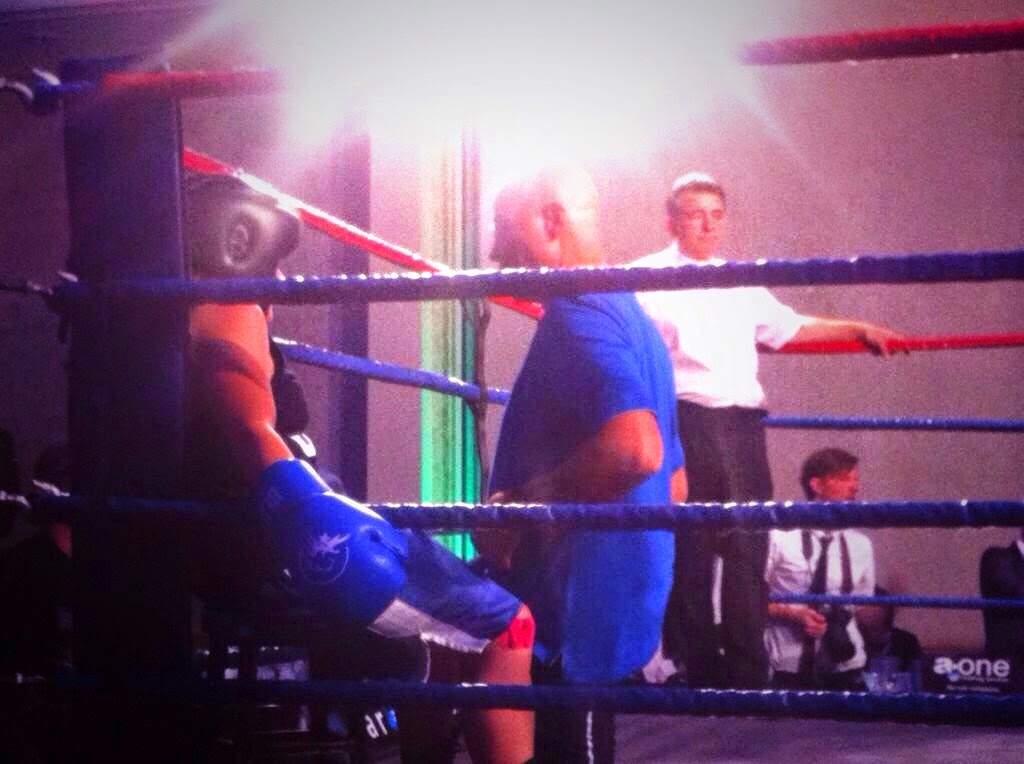 By the time the second round came the crowd were going mental, all eyes on us. I couldn’t believe it was actually happening, it was like slow motion. I slipped and got in close to land some combos to the ribs and body, and she used her reach to dish out some stonking head and face shots – I still need to work on my head movement. Every time she got me in the face or had me up against the ropes I got really angry and came back at her with everything I had. I did manage to crack a few in the face which I was pleased about but definitely had more success with getting in close and going for the body shots. 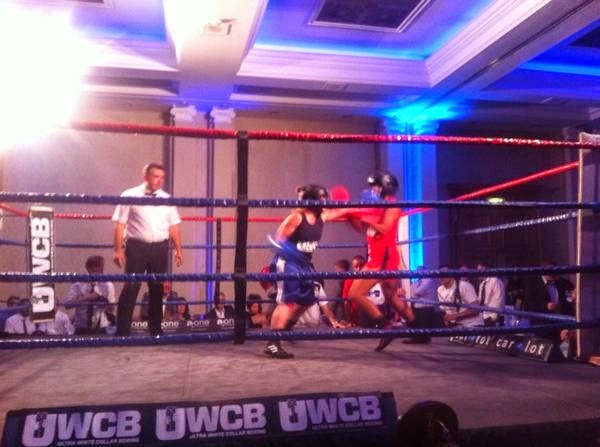 The crowd support was just amazing and every time one of us was going at it the roars from the room got louder and spurred us on. It’s an incredible thing to have the whole room watching just you and no one else, everyone cheering and screaming and whooping when one of you lands a punch.

Ours was the last fight so the atmosphere was electric.

At the end of the second round I was dead – I had nothing left to give but knew I had to go out fighting and that there was no time to rest. We spent a fair amount of time circling each other and staring each other out (basically grabbing a breather – thank God we let each other do that!) before moving in for another attack.

Looking at the official photos, we got pretty good at symmetrical synchronised attacks, which is quite funny: 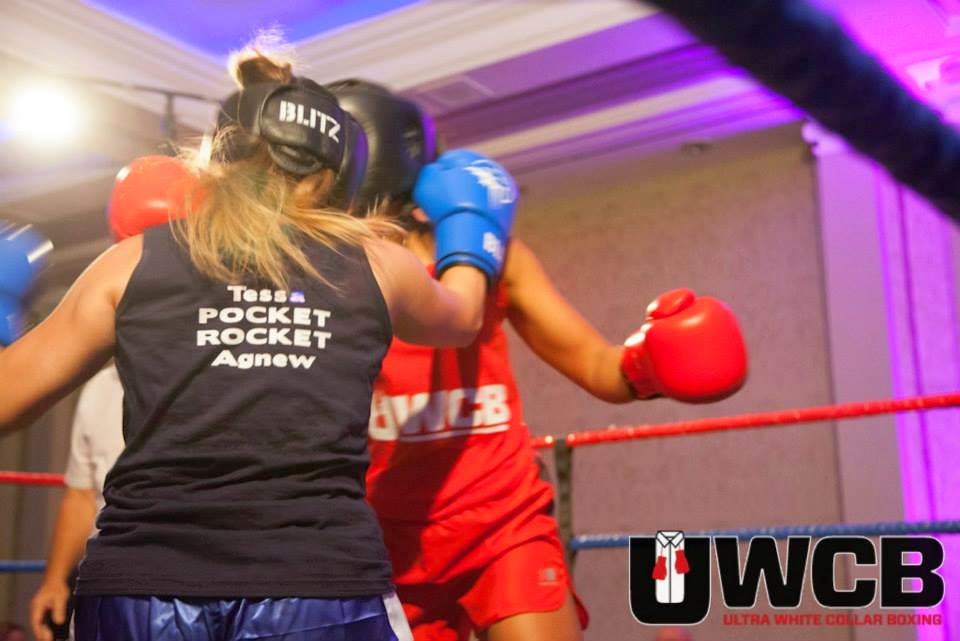 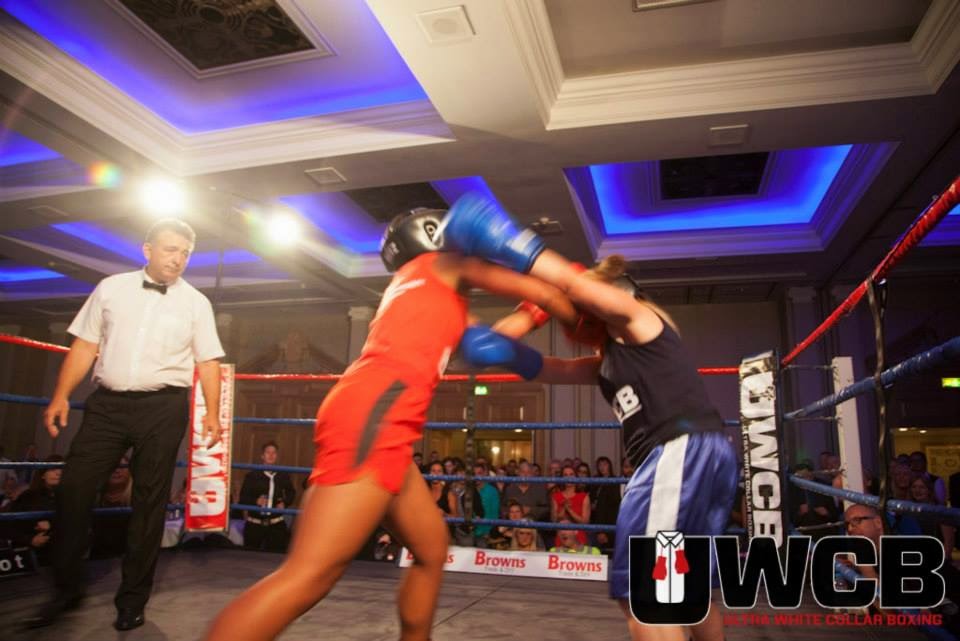 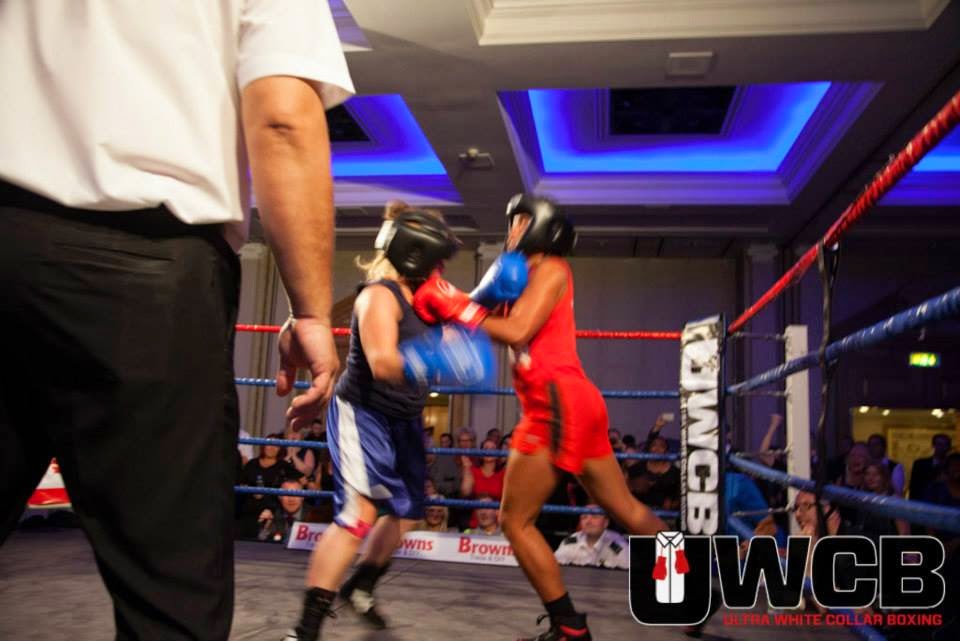 Third and final round on video

The third round was, for me, my best one. By that time I knew I’d lost but was so pumped and determined to go down fighting that I went all out until the final bell. Which, by the way, took a bloody AGE to come.

I was knackered, out of breath, my chest was tight, and I was counting the seconds for it to end but at the same time not wanting it to come so I could try and claw it back.

I can honestly say I’ve never been so knackered in all my life, in ANYTHING I’ve ever done. The marathon’s got nothing on this – it was six minutes of absolutely every trace of my inner soul – I left everything I had in that ring. I had nothing left in me.

Do what scares you

I’m a total sucker for a challenge. I love to push my limits and try things that scare me – this whole experience has been equally terrifying as it has been exhilarating and rewarding, and I am begging you to give it a go for yourself. Just once.

I’m gonna hopefully continue boxing and will definitely fight again at some point but will get some more training in first.

If you wanna see how badass the other Brighton girls were you can view all the photos from the Brighton fight night here.

You get eight weeks FREE professional training, get to meet a bunch of amazing people and raise money for Cancer Research, and have an experience you will NEVER forget. Ever.

I highly recommend taking up extra classes and PT sessions if you can afford it to be the best you can be – eight weeks from beginner to the ring is not long at all and it will fly by.

Especially if you go and get married in between it all and miss a few sessions!

Win or lose, it’ll stay with you forever. 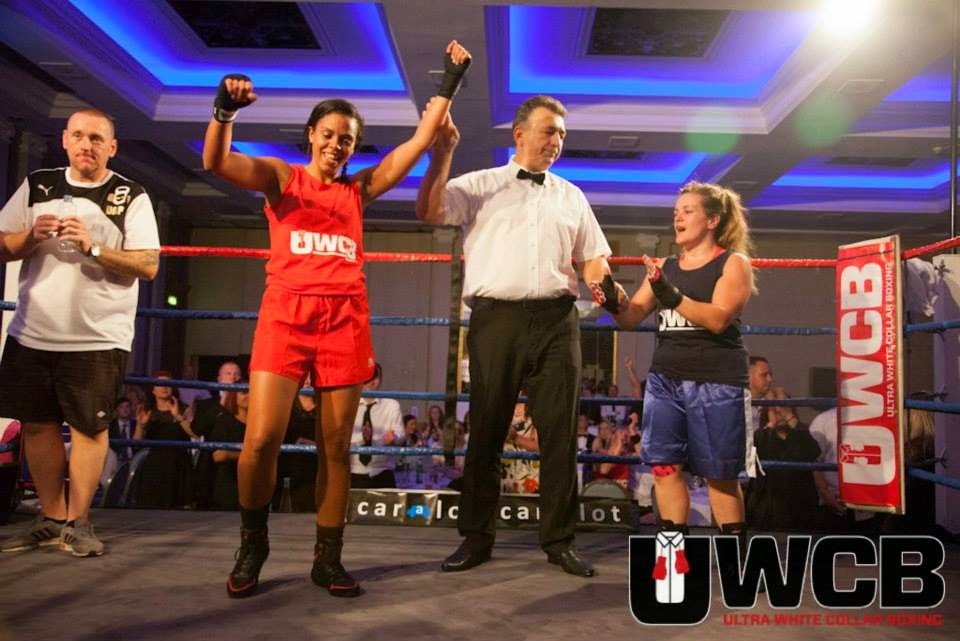 Go on, you know you want to…

Would you ever consider doing a white collar boxing event? Do you already do boxercise or boxing training/body combat or similar and want to progress? What do you do to challenge and test yourself?