You know when your head wants to do something but your body just says no? Yeah, that.

I should’ve known that after a week of running, climbing (more on this later) gymming and finally biting the bullet and getting back to the boxing gym, my legs would laugh at me for trying to bosh out a hilly 35 mile ride against the wind.

“Eh? The clocks have gone back and she’s set another bloody alarm to

‘make the most of it’ instead of having a lie in and rest day? Nah mate, not on our watch.”

We woke up after an early night (rock n roll, kids, rock n roll) mostly full of beans and sort of raring to go. Well, Chris was – I was tired and of the opinion that ‘it’ll be fine once I get into it.’

Which sometimes is enough to get me through, but not today.

We headed down to Velo Cafe for the 8.30am meet up and set off at 9. Before I go into why it went tits up today, I must tell you about Velo.

For those of you not in the know, Velo is an awesome new cycling cafe at The Level in Brighton, that does midweek and weekend road and mountain bike rideouts for all levels. I say new, but it’s been going for a year now and if you’re a cyclist and in/near Brighton you HAVE to come down. 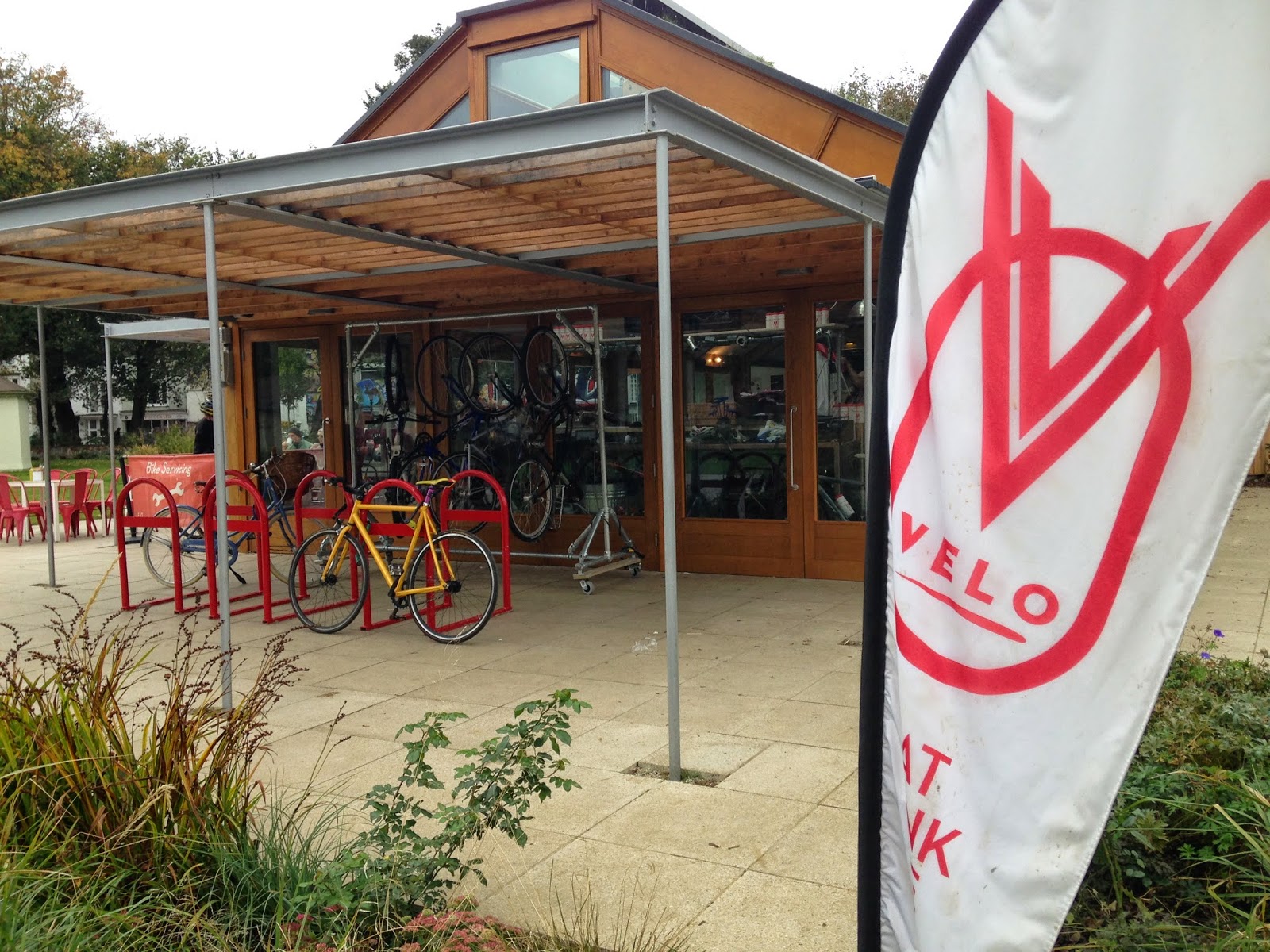 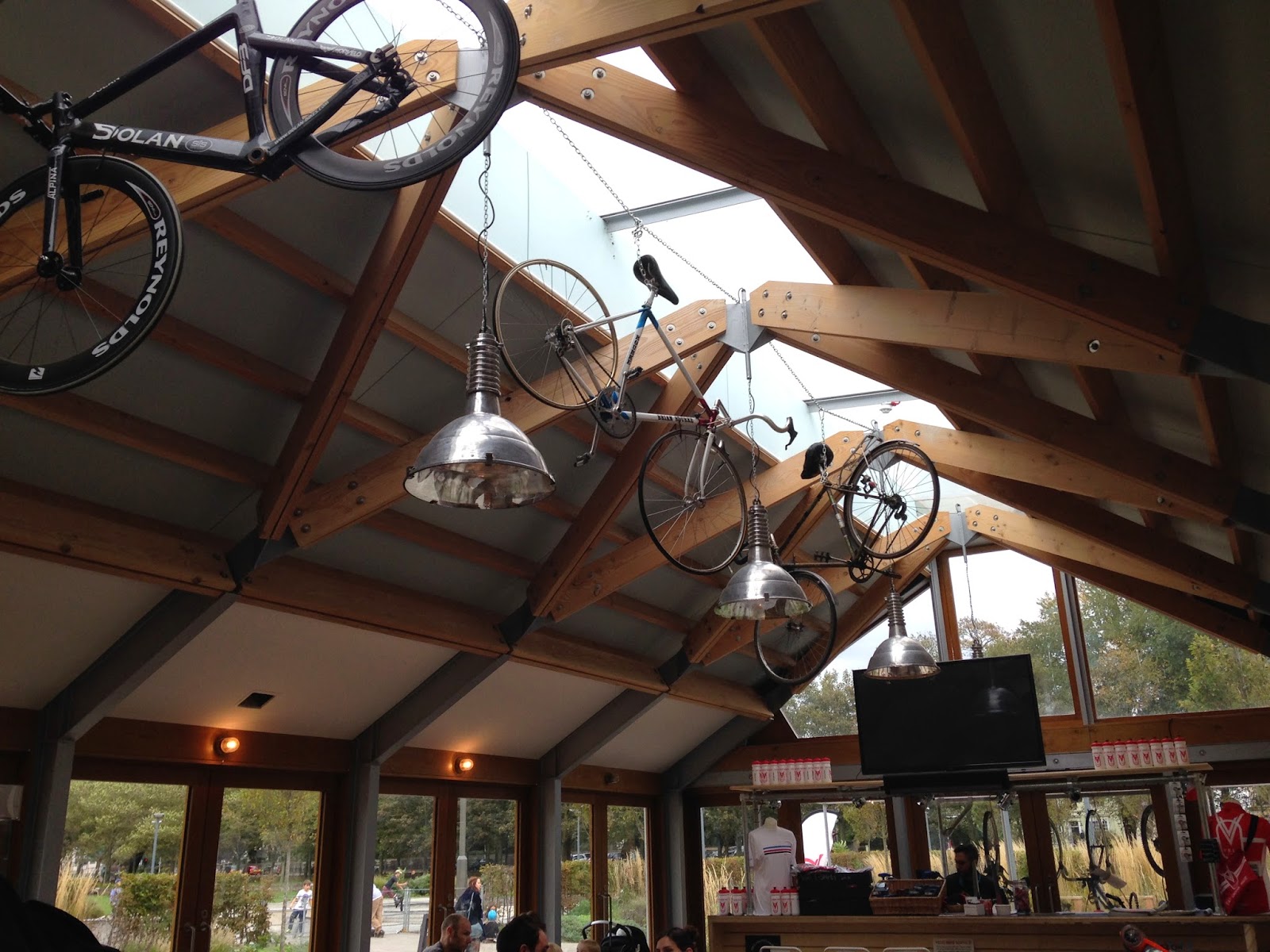 The midweek rides cost a fiver and you get a proper sexy homemade pizza or pasta dinner* at the end of it included in the price and can rehydrate with a nice pint of Dark Star bitter with your new cycling friends. 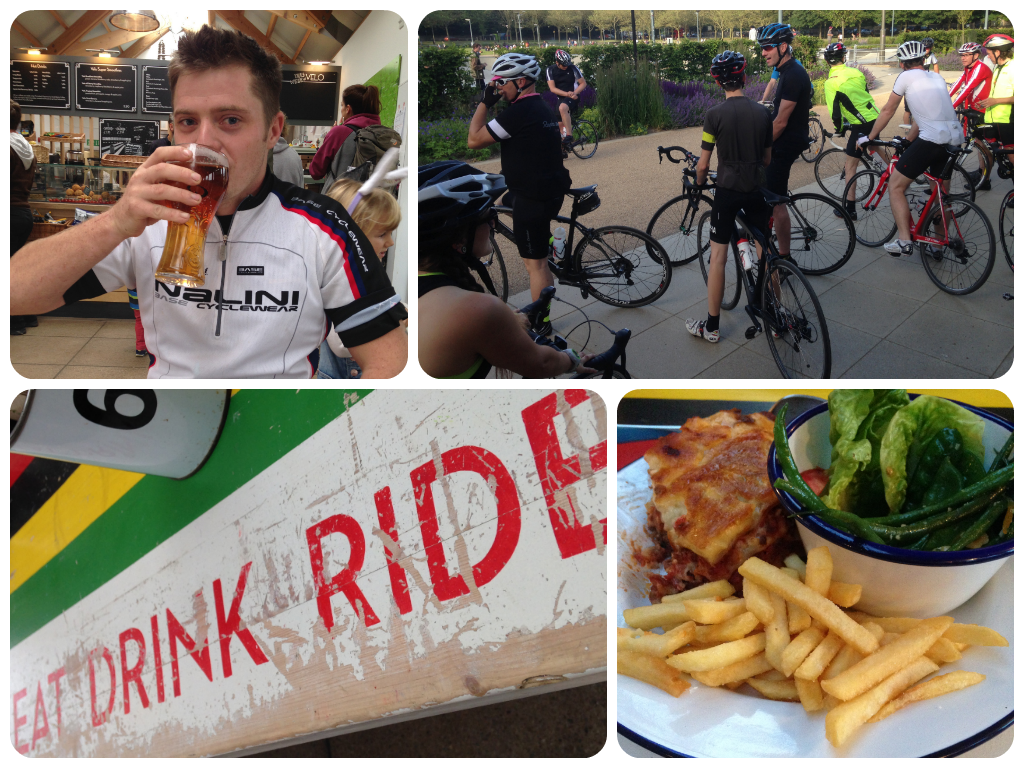 The weekend rides are free as there is no food included, but of course you can come back and scoff what you like for the going rates. (Why hello there, homemade sausage roll and scotch eggs). They also have a calendar of events, bike service packages and offer free workshops and one-on-one tutorials so you can learn to service your bike yourself. 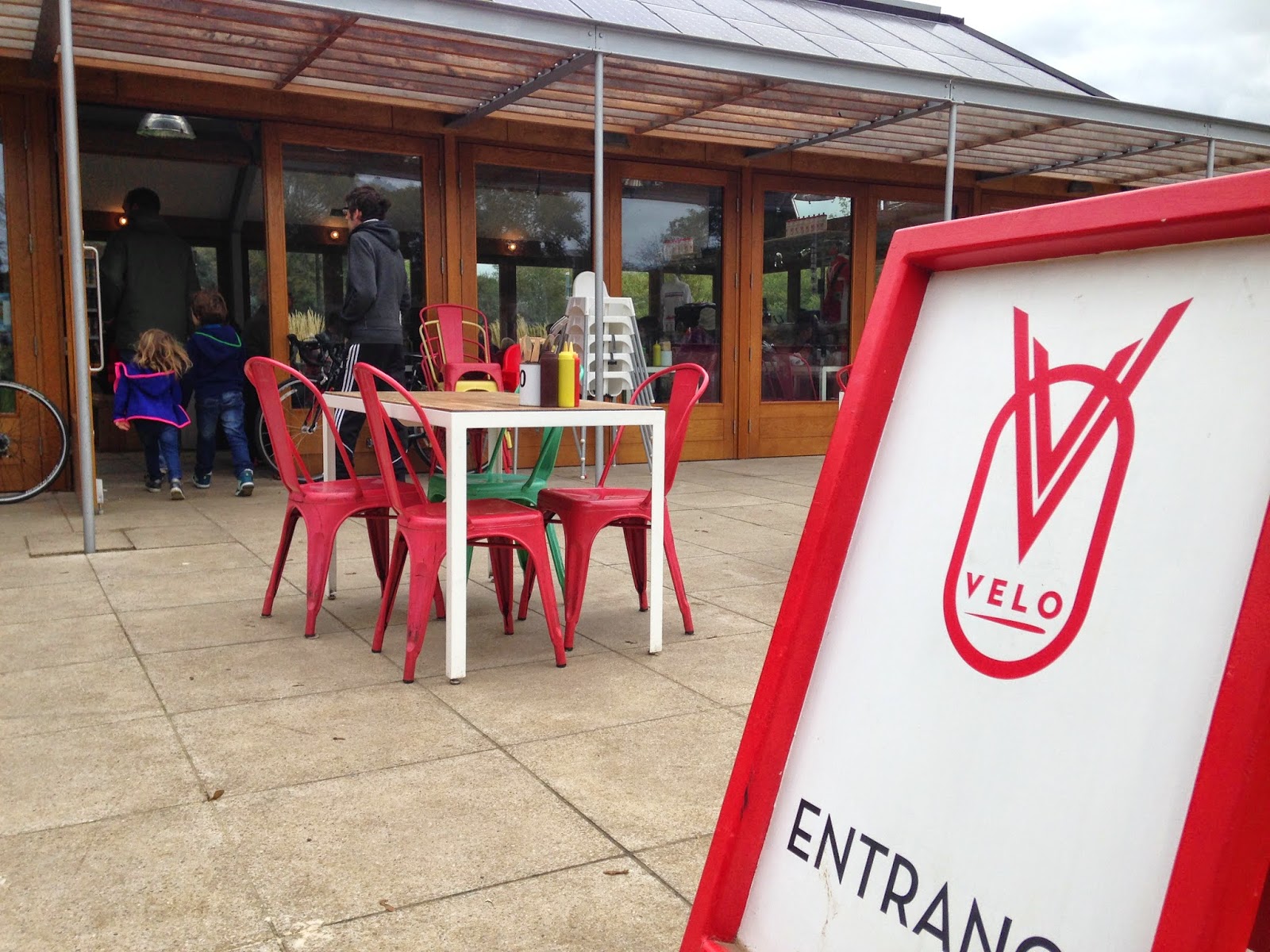 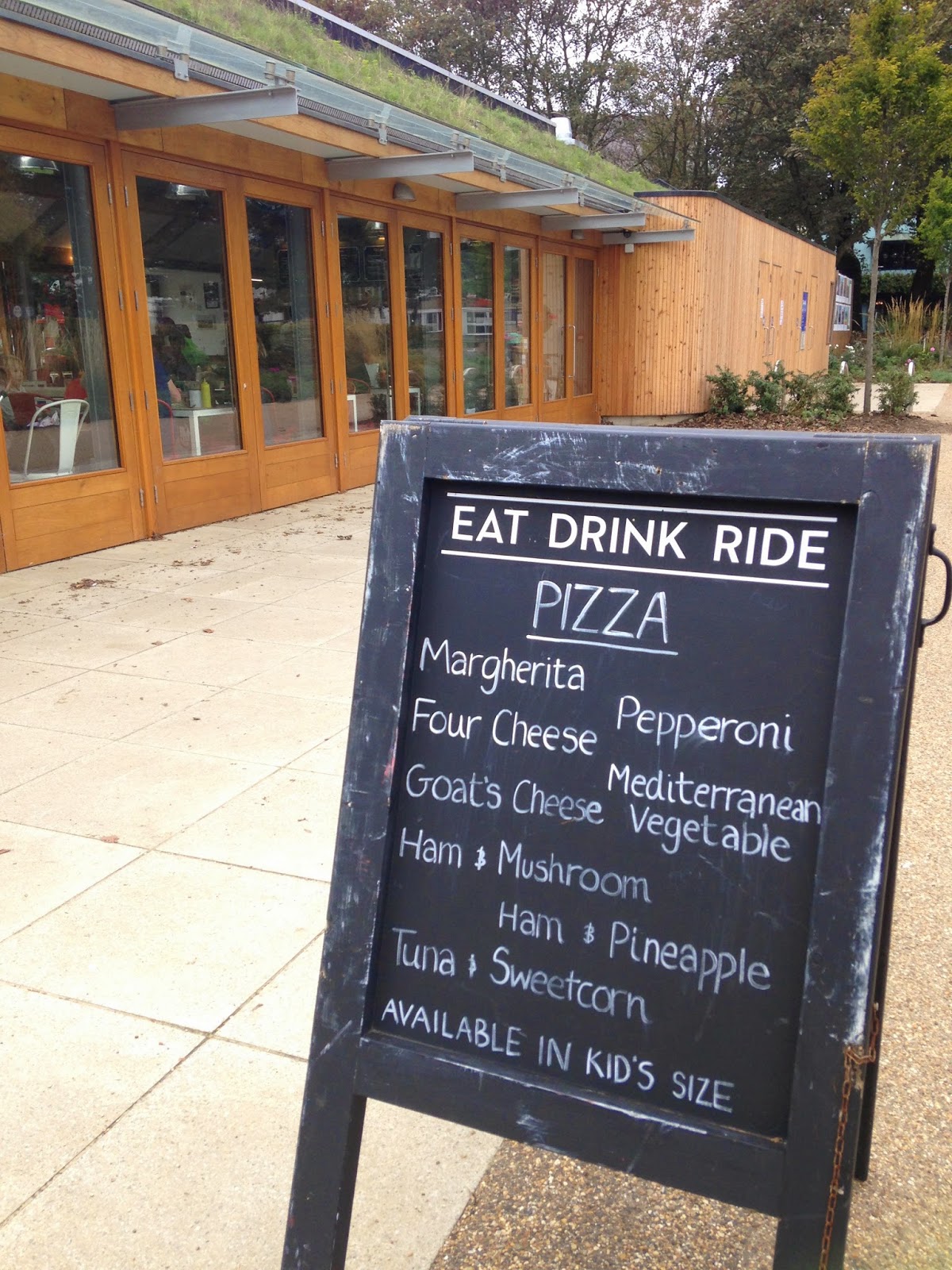 On the menu today was an ‘about 35 mile’ circuit from the cafe along the coastal road to Newhaven and up to Lewes before conquering the beast that is Ditchling Beacon and enjoying the descent back into Brighton.

I’ve done the Beacon before but only once, on the Tour of Britain rideout with the Velo crew – and after that we went on to do Bear Road too (another monstrous incline for you non-Brightoners), so I wasn’t scared of failing this time.

I also wasn’t prepared for just how tough it was.

Last week me and Chris nailed the long Sunday ride with some strategic planning that was in no way cheating at all. It was bloody marvellous.

This week the route was the same to Newhaven, and the wind direction was apparently the same too – LIES, ALL LIES!!

As soon as we set off I knew it wasn’t happening. My tyres were too flat, the wind was against us the whole way and I was absolutely knackered within 20 minutes. I was huffing and puffing along at the back, wondering how the hell I was gonna pull another 30 odd miles out the bag and make it up one of Brighton’s beastiest hills in one piece.

I *hate* failing – if I start something I have to finish it, and I love to work my ass off towards a goal; throwing everything I have into it.

Today I learned a lesson though – bailing on a ride, run, gym session or whatever when your body is just not having it is not failing at all. It’s actually pretty sensible. I peeled off just after Kingston with a few of the group and left Chris and the others to go and do the Beacon. I just didn’t have it in me.

I forgot that the way home was also another three miles into a deceivingly ferocious headwind along a dual carriageway which was pleasant, but by that time we were laughing at how ridiculous it all was so it didn’t matter. 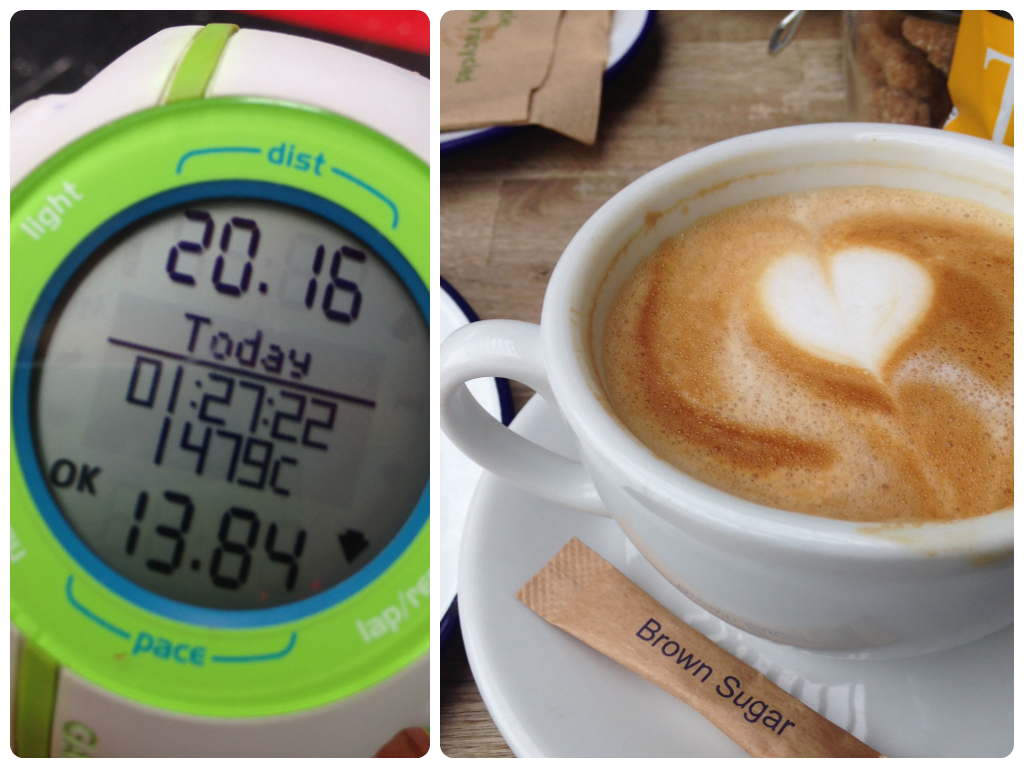 We got back to the cafe and refuelled with coffee, cake and sausage rolls (was a bit too early for a pint of Dark Star!), swapping stories and expletives at the weather, waiting for the others to come back. Despite the mega hard work, it was an epic ride and a stark reminder that winter cycling is gonna be just a little bit different from the balmy tropics of the beautiful summer that we’ve had this year.

I’m not putting my bike away though – I want my sausage roll, dammit.

But, I will definitely have a rest day tomorrow, I promise!

How have you found running and cycling in this changing weather? Do you plan rest days or do you wait until you crash and burn like I did today?