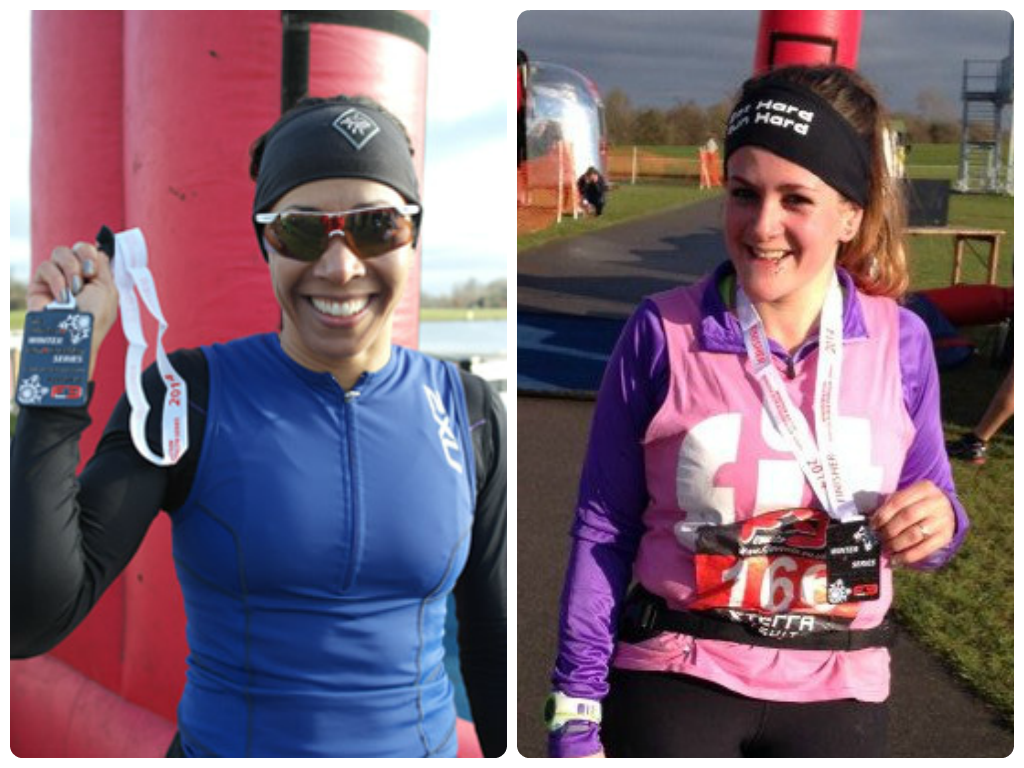 OK, so maybe she lapped me, spectacularly, over and
over again, on the run and bike laps, even with a puncture. But I did run past her twice on the out-and-back course so let me have my
moment, yeah?

Last Sunday, me and the boy got up at stupid o’clock and drove to the beautiful Dorney Lake to take part in the first
race of the Maxifuel Winter Duathlon Series. 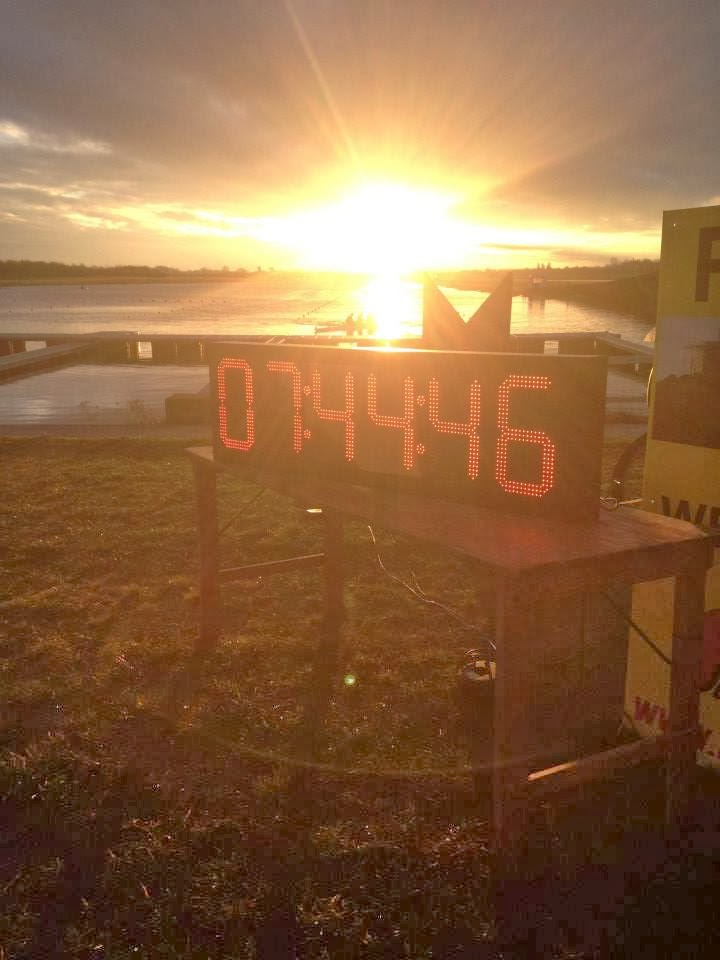 It was to
be my second duathlon, his first. My first duathlon was the better-trained-for London Duathlon, in which I finished strong and with a good time.

Being in the middle of marathon
training means that specific training for this race was cleverly disguised as marathon training with the odd cycle-to-and-do-Parkrun thrown in for good measure – so as you can imagine, I wasn’t at my duathlete best to say the least.

A word of advice, kids…

If you’re thinking of doing a duathlon make sure you train properly for it and respect the difficulty of having to put the distances and disciplines together – they may each be doable with your current level of fitness, but trust me, putting them together is a different matter! 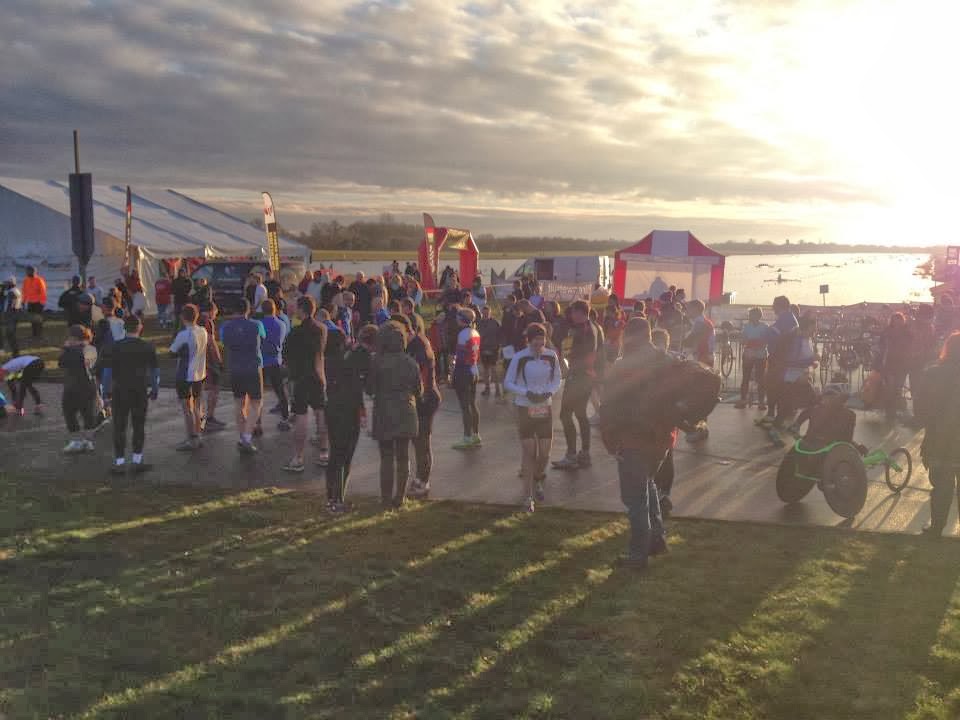 Anyway, this is how it went, km for km:

Start line:
Oh he’s giving us a pre-race brief. What’s he saying? Where’s the run lap? Don’t run into the lake? I need the toilet. My knees are a bit temperamental, hope they don’t give me jip. Ah, isn’t it a lovely day? 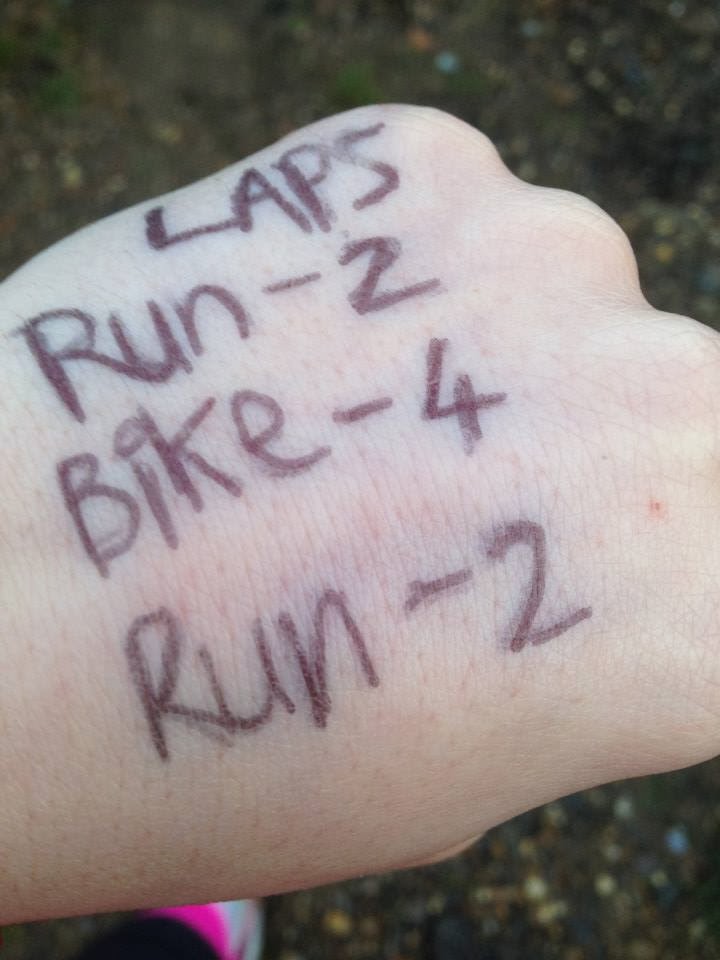 km 1:
Shit, overtaken by 90% of racers already – this is gonna be a fast one. Come on legs, stop being heavy, it’s only 5k. How many laps am I doing again? *checks hand*. I wonder where the boy is?

km 2:
That’s better, into my groove a bit. Overtaken a couple of people, but still at the back. That’s fine. This sun is getting in my eyes, where’s the boy? Oh there he is, on his way back! *High Five*.

km 3:
Hmm, out again for the second lap – this isn’t too comfortable. I’m not racing anyone here, taking it steady as don’t wanna bugger knees for the marathon.

km 4:
I like that girl’s compression socks. I’m gonna get some on payday. This is such a beautiful place 🙂 I wonder how the boy’s getting on.

Yay, (first) home straight. Shit, gotta do that again after 20k on the bike. Come on legs. *takes gel*

Lap 2:
Ah. This is harder than I thought. Everyone’s got carbon fibre performance tri bikes. Why did I bring a hybrid?  Ooh look at the rowers on the lake! This wind is up on the way back – my legs hurt. I wonder if the boy’s finished yet?

Lap 3:
Two more of these? This is gonna hurt. *takes gel* Why are these people walking their bikes back? Oh they’ve got punctures. Gutted. Bless my hybrid and its chunky, non-racing tyres. Where’s the boy? Oh there he is! Shit, he’s got a camera. Look happy. *grimaces*.

Lap 4:
Jesus Christ I’m knackered. How am I gonna run another 5k after this? I want to stop. Shall I just pretend I’ve got a puncture? Nah, I want that bloody medal. My bum hurts.
Time: 45:57

km 1:
My bum hurts. My legs don’t work. I want my mummy. *stops to do hair and contemplate calling mum*.

km 2:
I’m hungry. *tries to take caffeine non-isotonic gel*. Shit this is thick. Eugh this is horrible. *gulps water, chokes*. My legs hurt. Half way there though… keep going. She looks comfortable. Show off. There’s the boy with a camera. Don’t grimace. Smile. *grimaces*.

km 3:
OK nearly there, have turned back now. I can do this. God, this is little more than a shuffle. Knees not too happy. Hope this doesn’t happen at the marathon. I wonder what the medal’s like.

km 4:
There’s that show off again. Looking all comfortable. I want her legs. And her sunglasses, this sun’s right in my eyes. Are we finished yet? *checks Garmin* Oh wow that’s a slow pace. Don’t tell anyone.

Right, come on. This is it. Pick the pace up. Oh ok, no, no, slow it back down, that’s fine. I want a roast. Where’s the boy? Home straight. There’s the finish line. There’s the boy with the camera again. Don’t grimace. Smile. *grimaces*. Ooh, shiny medal! 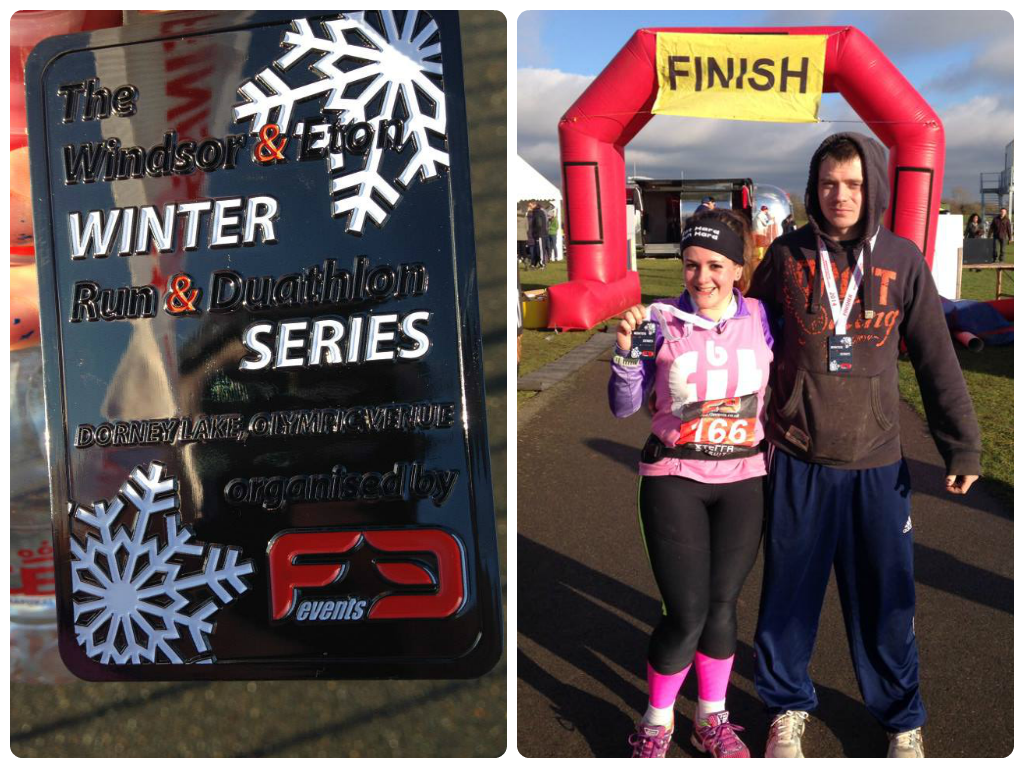 I found out at the end that the boy had completely smashed his time, coming in 11th out of 28 in the Super Sprint, even on a chunky hybrid. He’s now up for triathlons and all sorts. 🙂

So, boys and girls, lessons learned from my second duathlon:

I won the pair of tickets at the Write This Run conference at the Running Show – who else won places for this one? Or have you done a duathlon before/thinking about one?