I’m on such a high right now, it’s ridiculous. When I started this blog a few months ago I kept writing about wanting to get faster and improve my pace and technique in time for the Brooks 10k. I’d just started adding intervals and hills into my training and was aiming to break the hour for the race.

Today was that race. I came in at 54:54. To say I’m chuffed would be an understatement – I pity anyone who talks to me over the next few days ’cause I’m gonna be a nightmare.

I’ve been working really hard on my running this past few months – focussing on shorter, faster runs to try and give it some welly in the pace department and improve my stamina and endurance. Parkruns, Sweatshop intervals and hill sessions, weekly seafront 10ks and a few runs to work/around the track seem to have done the trick in getting me faster. 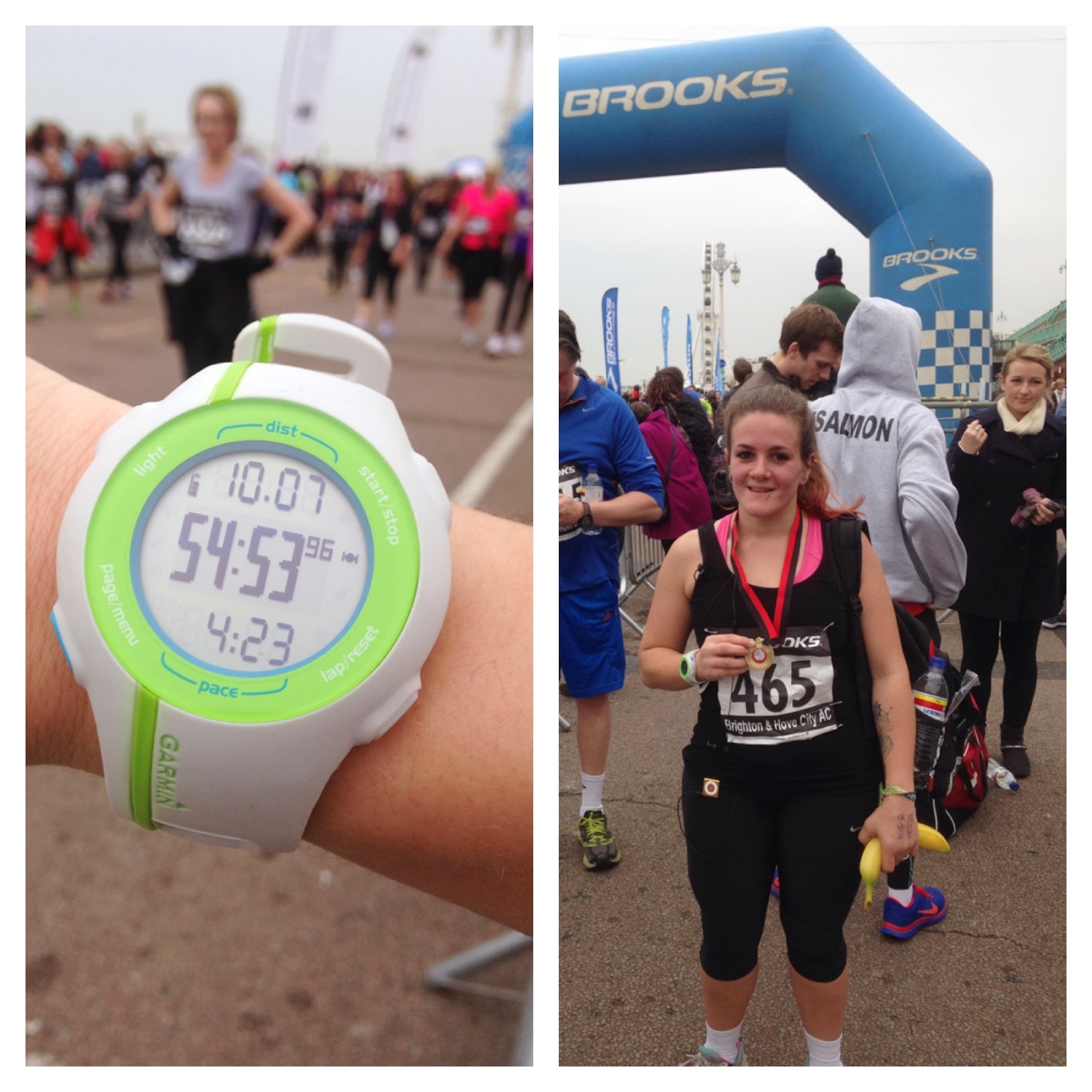 The past few 10k training runs have been around the 57 minute mark so I set myself a top goal of 55 minutes for the race, with a secondary goal of 56 minutes if I couldn’t quite do it. This is the first race I’ve ever actually sat down and worked out the pace I needed to run at to reach a goal – normally I just go for it and see what happens.

I think having a Garmin has a lot to do with it – it’s much easier to keep track of pace and distance when it’s on my wrist rather than using a phone app in a pouch on my arm. I wrote my two goals on my hand to remind me – something I’ve seen lots of fellow runners do on Twitter and thought I’d give it a go. 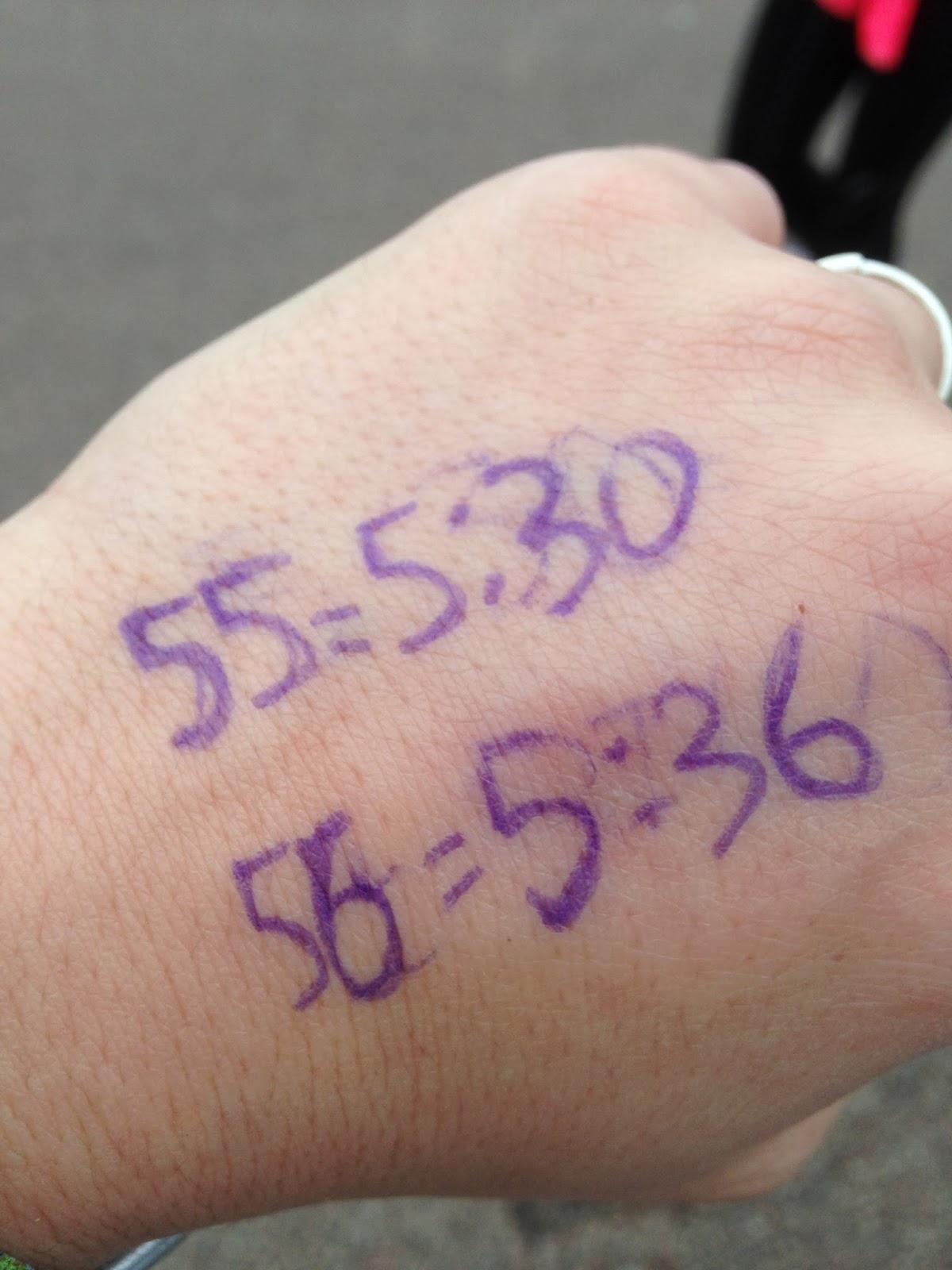 Keeping one eye on my Garmin I could see throughout the race that my pace was fluctuating between 5:25 and 5:40 for most of it, although looking at my splits it seems I started off really fast and then slowed in the middle, before picking it back up again for the finish line glory. To come in just under 55 minutes has made my day and proved to me that all it takes is a bit of commitment and hard work to reach my goals.

With that in mind, I thought I’d share a few things I’ve learned since May if you’re trying to be a better/faster runner.

How to run faster

Sometimes things really are that simple. If you want to run faster, you’re gonna have to occasionally run faster. Add speed sessions into your training. Pyramid intervals and fartleks are a good way to get the blood pumping and wake the old lungs up. It needs to hurt, but a comfortable hurt, if that makes sense.

2) Step outside of your comfort zone

It took me a long time to realise that I was never gonna get better if all I did was plod around the park or along the seafront in training. I spent the whole time training for both of my half marathons sticking to the same pace, same routes, same times, all that changed was the mileage. Yes I was able to run further, but not faster, and not better.

It was only when I stepped outside of this comfort zone that I started to see improvements. Hill training, speed sessions, shorter and faster runs, cross training. It’ll hurt, but it works.

In order to get better at running, you need to run more often. Two ploddy runs a week alongside other sessions/classes aren’t gonna make you a stronger, fitter or faster runner, they’ll just maintain the level you’re at right now. I thought doing 3-4 bootcamp sessions and running twice a week was enough training for a half marathon. Yes, I was fit, but not running fit. I got through it, but it wasn’t easy, and hurt more than you’ll ever know. (I’m looking at you, last 5 miles of Brighton Half Marathon).

It’s only since I’ve started running more often, well outside of my comfort zone, that I’ve seen improvements.

I don’t know about you, but I run much better when I’m with others – whether that’s in a group training run, my local Parkrun, Sweatshop run or a race – I hate being last and will always try and keep up with whoever I’m with. Even if you can’t keep up with the group keep trying – you’ll soon edge closer and in time will be able to maintain a faster pace for longer.

Picking off people in front of you to overtake is always a good game to play too, I learnt this from Sarah on Twitter a few months back, and do a fair bit of it myself now to pass the time in races. 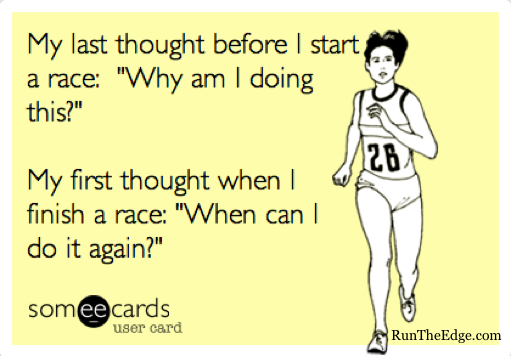 By the way, I’m not pretending to be an elite runner here, I’m a very far way off being the best I can be, but what I do know is that hard work pays off. I’m a sucker for finish line glory and it’s only the latter part of this year that I’ve actually enjoyed getting to the finish line rather than enduring it.

but get out there and get it done and you’ll reap the rewards!

Are you running faster than you were a few months ago? Any exciting PBs or tips I’ve missed to learn to run faster?