A couple of weeks ago me and the bfit crew flung ourselves around the 6km course of swamps, rope ladders, tunnels, cargo nets, climbing frames, monkey bars, hills and myriad of other obstacles that is the Warrior Run. Situated just outside of Brighton at Q Leisure, the Warrior Run hails itself as the ‘toughest obstacle run in the South’ and offers competitors a 6 or 12km slog.

*I apologise now for the use of watermarked professional photos in this post – I have no dollar until payday to purchase any!

It’s the second time I’ve run this race, the first being in April, again with the bfit crew, and it was tough! I found the actual running bits much easier than last time, which I guess is down to me running more over the past few months, and seeing improvements in pace and strength.

The obstacles however, were just as tough, if not tougher, than in April. The problem for me is that I’m shorter than most 10 year olds (4ft10, thank you very much), and this makes 6-7ft vertical walls and 5ft deep swamps pretty difficult to navigate, even with a helpful leg up from fellow runners! 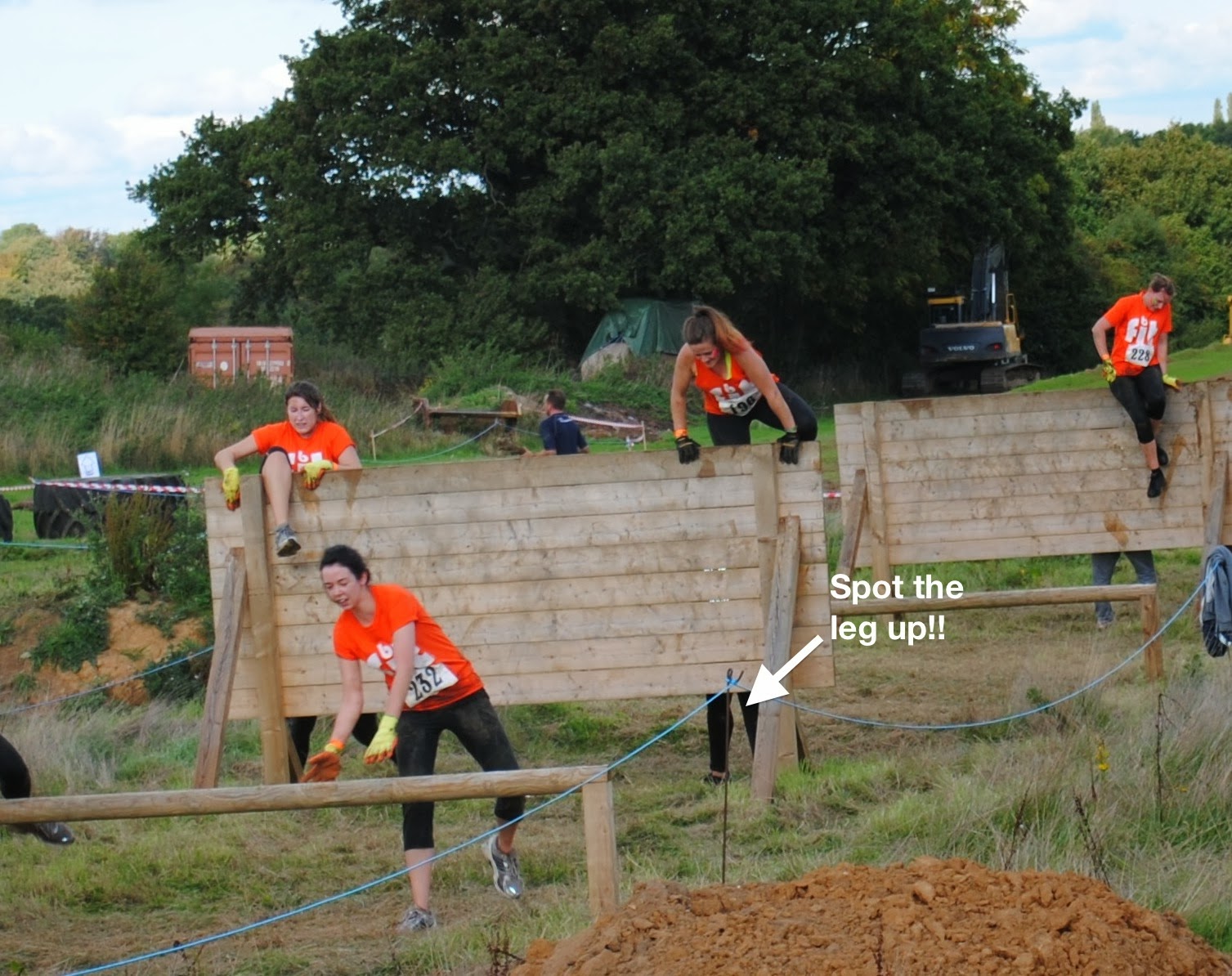 Despite this though, it really was so much fun, and I stuck with a couple of friends so we could help each other out round the course. The atmosphere at the race village was great as ever – with music pumping from the warmup area as warriors prepped for their heats (warmups led by bfit).

We had to queue to get our race packs like last year (not sure why they don’t just post them out like other races, it’d be much less hassle on the day for both the team and competitors). Once we’d picked up our t shirts, timing chips, race numbers and wristbands we headed over for the warm up which went a bit like this:

And this: (Warming up’s a serious business, don’t you know!)

We had about 75 bfitters running in the 12pm start – so after the warm up we all made our way to the starting area to get in warrior mode and begin the run. To get everyone in warrior mode, organiser Lloyd got everyone revved up to get our game faces on and give our best warrior roars.

Then we were off. Straight into the first swamp and then out onto the main course – over dirt mounds, carrying logs and tyres, through ‘spiders webs’ and monkey bars, under cargo nets, through tunnels and ditches and streams. We returned battered, broken and bruised but beaming from ear to ear. It was really hard, but so much fun, and great to run as a team, as everyone helps each other out and no one gets left behind.

Where else can you throw yourself down a homemade water slide and call yourself a warrior?! 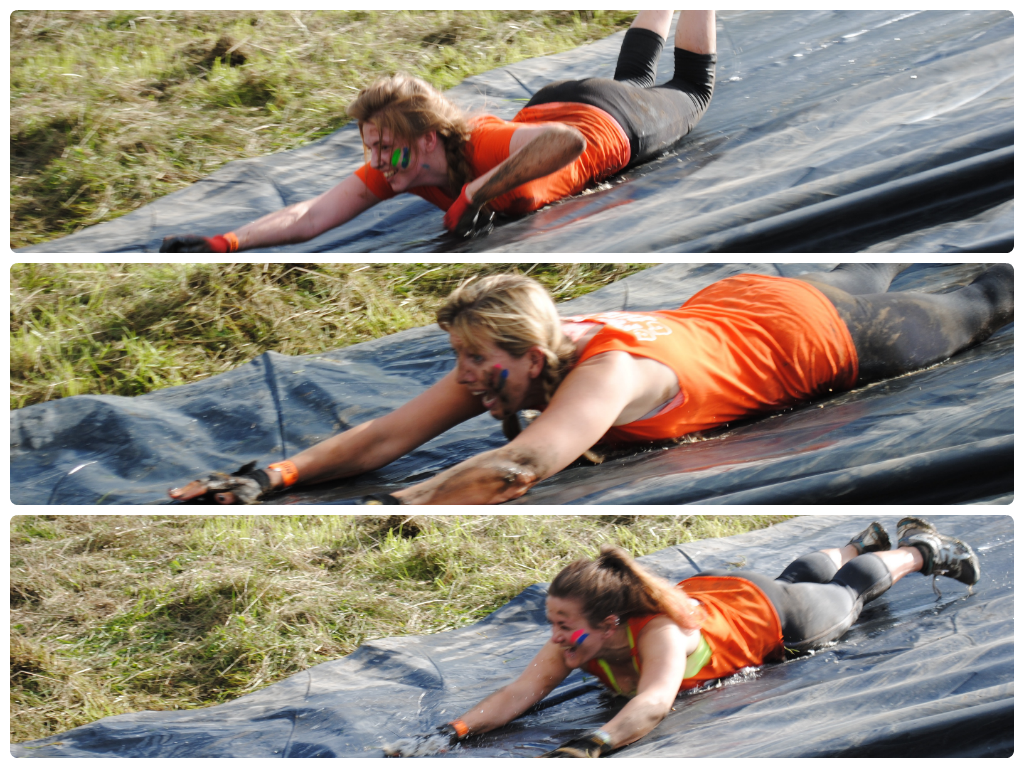 The swamps were definitely deeper than in April. I have a thing about not being able to touch the floor when in water, it sends me into a bit of a blind panic, and so when we launched ourselves into one of the last swamps of the course I was pretty horrified at how deep it was. From the looks of the professional photos though it seems like I soon got over it… 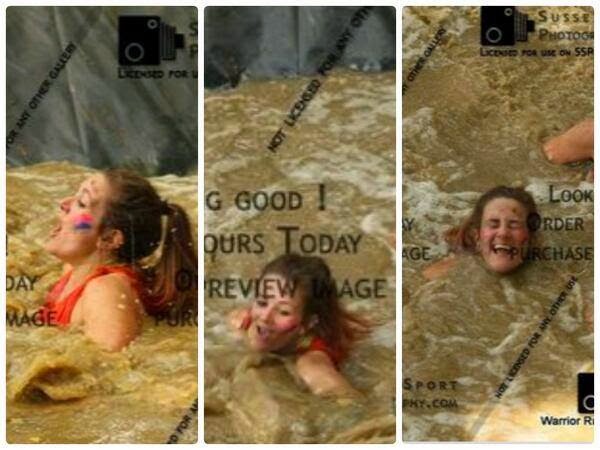 I didn’t even make it anywhere near the monkey bars as they were so high but some bfitters figured out clever workarounds and went up and over instead of across them: 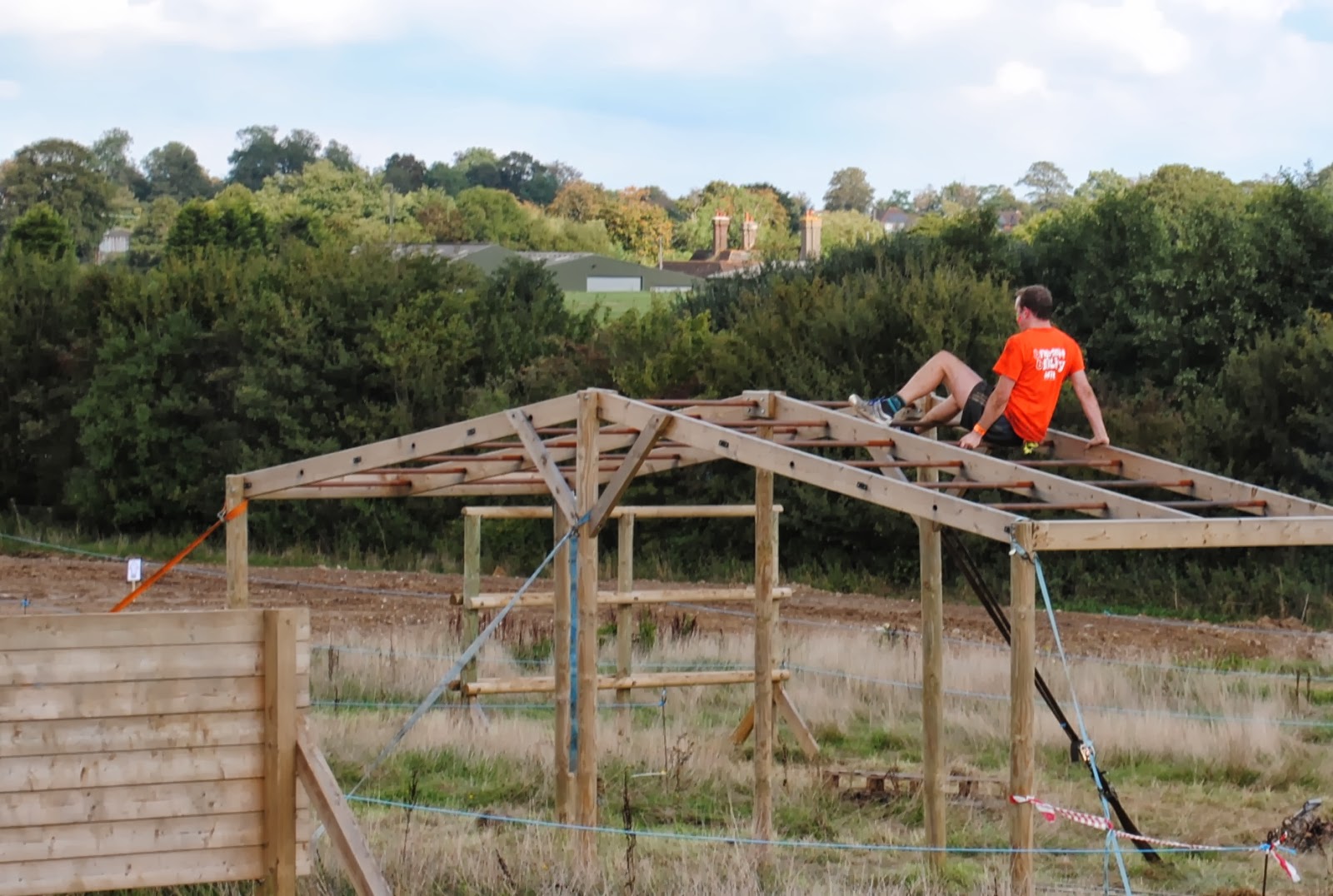 Along with the monkey bars, other parts I struggled with were the different climbing frames – my short and stumpy legs aren’t best suited to propel me over these things with any sort of dignity or grace, and they’re pretty high too so do put the fear in me a little. Comparing my performance to others kind of illustrates this pretty well I feel…

There were some new additions to the course this time round – we had to lift these mahoosive tyres that weighed more than 20 elephants (you weren’t there, man) and jump over a fire pit and complete a rope hang or climb on the other side. The fire was especially cool – I’d like to see more of that next year.

I have to say I enjoyed it more this time round than last, probably because I knew what to expect and also because I found the running easier. Also, it was great to have everyone in the 12pm heat a bfitter, it made it a real team effort. (We won’t talk about the fact that speedy people from the next heat started to overtake some of us towards the end!)

Not everyone was slow though – a massive well done to my boy who came second in the bfit heat – smashing it in 46 minutes (with zero training!) – I guess climbing trees for a living helps with all this obstacle race stuff!

There’s another one on 30th March so no doubt we’ll be back again for more. It’s always a great event, with a fantastic atmosphere and goodie bag (this time we got a yummy smoothie, medal AND a t shirt!) Visit the Warrior Run website for more info on the race and entry.

More photos from the day on the bfit Facebook page.

Have you done an obstacle race before? I *might* be considering Tough Mudder next year, although aware it’s a massive step up – any tips/horror stories to share?