So I’ve finally got round to writing my recap of the third and final day at the Dorset Hillmotts bootcamp. Even though it was only the weekend before last, it seems like ages ago we were there – I’ve been really busy and have actually got a backlog of three other posts that need writing so best get on with it! 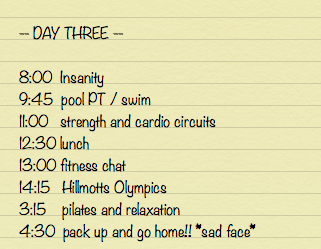 Day three started in great Hillmotts fashion – with an 8am Insanity session (after our half-bananas, of course!) Me and my bfit fitties were secretly excited about this as this style of HIIT training is what our Thursday evening HIIT sessions are like at bfit – rather than the combination of strength exercises and running we did on the Saturday morning HIIT session.

Don’t get tired get angry

There were seven exercises, and four rounds to get through. The exercises were a mixture of explosive plyometric exercises (jumps), compound strength and cardio exercises such as press ups, mountain climbers and static sprints.

When trainer Chris said the exercises were to be done for 30 seconds each with 30 seconds rest in between we grinned to each other knowingly – our bfit HIIT sessions are for 50 seconds each exercise with only 10 second break in between – this would be a walk in the park by comparison, surely. 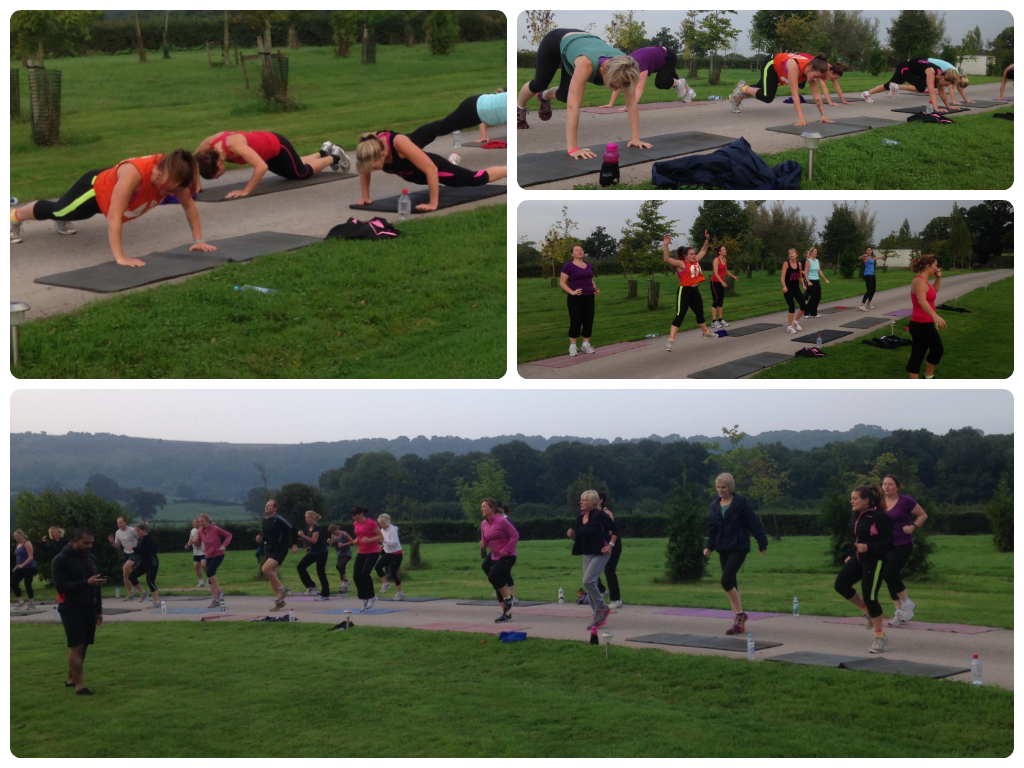 That was only the first round. The second round went up to 45 seconds with a 30 second break – painful, but doable. The third round… each exercise for one minute each, with NO BREAK. That’s unchartered territory for us bfitters. We cherish our measly 10 seconds break, so to have 30 is a bonus but to have it then snatched away so cruelly was a shock to the system.

Bloody hell that round was hard.

There’s a two minute break between rounds three and four, and then round four goes back down to 30 second intervals, but still with no break in between exercises. This is the round you throw everything you have left in you at. Or as trainer Chris put it:

One last push. Don’t get tired, get angry.

In total the Insanity session only took about 45 minutes including breaks, but it pretty much finished us off in time for breakfast.

After breakfast (porridge again, but this time I went all out and put peanut butter, blueberries AND cinnamon in!!) it was Pool PT with Chris again. The group was split into three and some people did Core with Zak, or Kettlebells with the other Chris. I chose Pool PT as I was aching and broken from kettlebells the previous day.

The camera didn’t make it into the Pool PT session for obvious reasons – there’s nothing glamorous about the knackered, panda-eyed-sodden-face that ensues after a hard session in the pool. I didn’t really know what to expect as had never done it before, but it was really good (i.e. hard work!)

We did things like standing in the pool by the side and jumping out and back in multiple times, half jumping out and standing up on our arms on the side for a few seconds each time, running and swimming from one end to the other, holding the edges and kicking like crazy for 45 seconds – one minute intervals.

The circuits that finished everyone off…

After a snack (peanut butter on ryvita or hummous on rice crackers) the whole group headed outside for an hour of circuit training. This was probably the hardest session of them all as by this time everyone was just knackered. There was a strength area and cardio area, the strength featuring exercises like kettlebells, squat holds, press ups and crunches, and the cardio section had ladders, burpees, bear crawls, star jumps etc. to get through.

I think Zak had originally planned for us to do three rounds of each but by the second everyone was dead so he let us go in for a much-needed lunch!

Sunday lunch was not quite the full blown roast with all the trimmings that we’d been hoping for – but a bowl of tomato and lentil soup with half a wholemeal pitta bread. Some strange people who don’t like tomatoes (mentioning no names Carla!) were lucky and got chicken salad – much to the dismay of us on her table!

The soup was lovely though, and was more than enough to fill us up and refuel after the morning’s hard work. 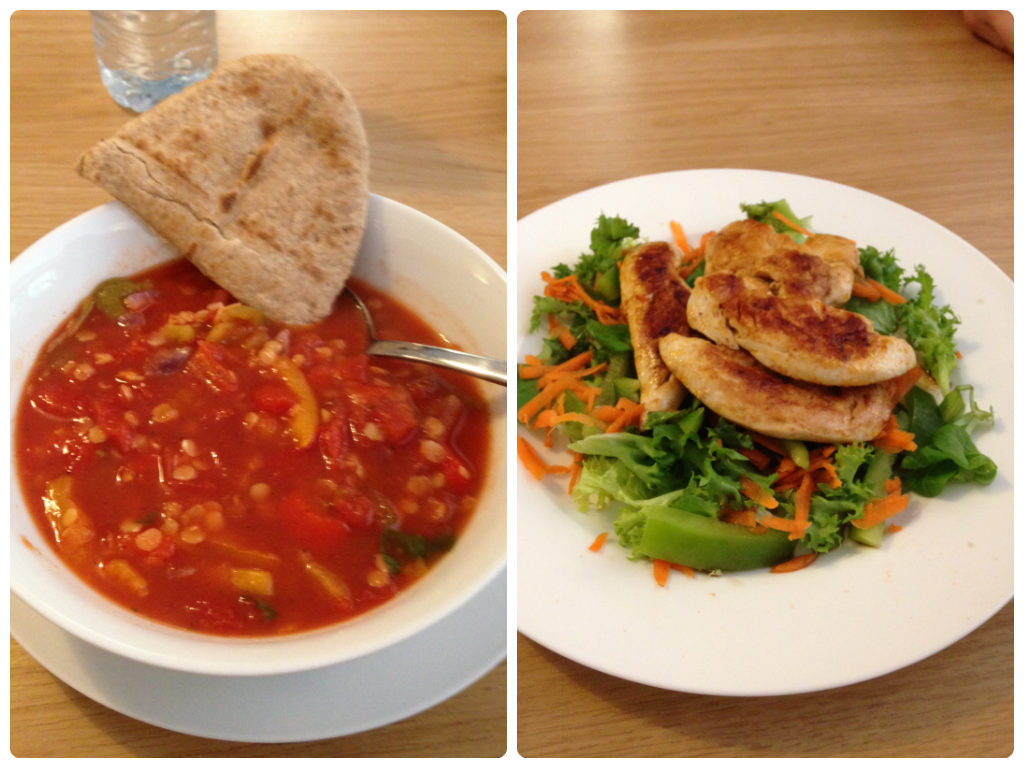 After lunch we had the second of our talks with Chris – this time on fitness and how to make the most out of our training to reach our goals. As with the nutrition chat that he gave the previous day there was lots to learn and take in (probably a whole other blog post in its own right), but here are the basic points covered:

The penultimate session of the day was a fun one – the Hillmotts Olympics. The group was split into two teams and we went head to head for the glory and title of Hillmotts Champions. Exercises ranged from running with weights in our teams to bear crawl races, medicine ball throwing and backwards running:

My team (Team Hardcore) trailed behind in all of the exercises until the final – the plank-off. Each team lined up against each other and got down into the plank position. The stakes were set – the Hillmotts record was 7mins30secs, held by an ex-Navy girl.

Now I’ve got a thing about planks – ask me to do crunches or sit ups and I soon buckle but planks… I can hold a plank pretty well for a considerable time. So I was secretly excited when Chris said that whichever team won the plank-off would be crowned Olympic Champions for the weekend. One by one people dropped off, until it was just me and one of my bfit fitties that I came with battling it out (Monica).

She was holding it strong and I knew she wouldn’t give up without a fight, so with each team rallying for either me or Monica, things were getting interesting. Finally, Monica bailed out (at an incredible 4mins30secs!!) and I breathed a sigh of relief – we’d won. But I kind of had it in me to keep going, just a little bit. Everyone went mental and started shouting and cheering for me to keep it strong – 5 minutes on the clock and only 2mins30 to go to match the current record…

Another minute and a bit passed and by this time I was struggling, in pain and was desperate to stop but everyone was going mental:


I would’ve definitely stopped if it wasn’t for everyone shouting at me! I don’t know who said 75 seconds but whoever it was – thank you! It seemed much more doable if put into seconds, so I held it up, amidst unflattering yelps of pain and moaning.

I made it to 7mins 30 and then kept it up for 4 more seconds just so the record was mine. I cannot describe the feeling of having 25 people rallying around me, yelling support, keeping me going. It was amazing, and I’ll never forget it. Nor will I ever be able to do that again, probably (recent planks at bfit bootcamp have been much more painful and short-lived).

The final session was pilates and relaxation, with the same Chris who pushed us to our limits in the Insanity session that very morning. 45 minutes of deep stretching and meditative relaxation – it was a lovely and blissful way to wind down from the weekend’s hard work.

We were so sad to leave it was ridiculous. I had the BEST weekend at Hillmotts, and left feeling revitalised, re-energised and absolutely on top of the world – we’re already planning our next trip in the Spring.

A bonus too, but not what we came for, is that we all lost weight – I lost 4lb, and my two fitties lost 2lb each. That’s 8lb lost between us in just 3 DAYS!! Mental.

Collective pounds lost between me and my girlies: 8
Amazing times had: infinite

Have you been to a residential bootcamp before?

If you’re considering it but aren’t sure… DO IT!! It’s amazing!

Visit the Hillmotts website for more info on bootcamps and fitness retreats.