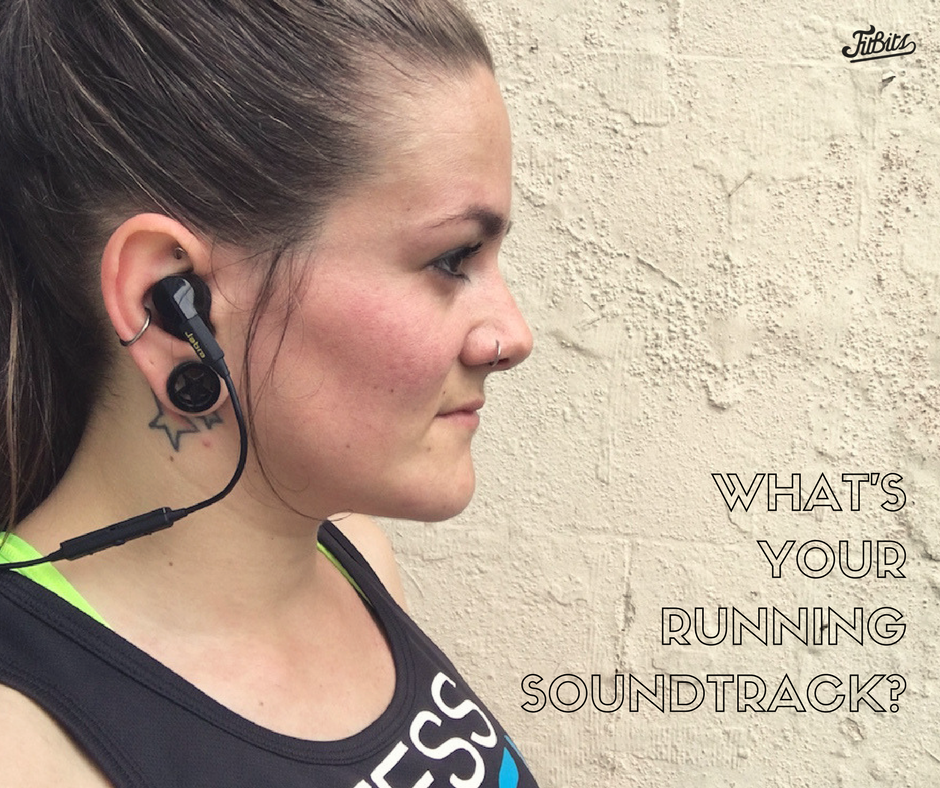 What gets you going when you run or exercise?

I mean really gets you going? Is it the sound of your breath, the pounding of your shoes on the tarmac, the clang of the barbell hitting the floor after a deadlift PB? The whooping and cheering in a Zumba class when the beats hit you hard?

For me it’s music.

A nice bit of Biffy Clyro on a steady progression run, or a chilled dose of Elbow on the long slow plod. Listening to music while running has its lovers and haters. Some people can’t run without it – others fully embrace the meditative nature of putting one foot in front of the other with only the sounds of the park or city in their ears.

I know which I prefer…

Short, fast runs = music. The intervals, progression and steady runs of this world are best enjoyed with a progressive house or drum n bass soundtrack. Either that or Biffy.

Long, slow runs = music, or a podcast (if solo). Elbow, Doves, Kings of Leon, Wolf Alice, maybe even Pink Floyd if I’m feeling particularly dark. Or a nice bit of liquid dnb to ease into the miles. Podcast-wise, I totally bummed the first series of Serial on my last marathon training cycle, but can’t seem to get into the second one, nor find another podcast interesting enough to zone out to.

For me, music is a great motivator

I love the way a song can take you right back to a specific moment in time – like a memory in a pensieve from Dumbledore’s office, streamed straight into your brain as you tick off the miles.

I’ve always been into music, from a very young age. Early dreams of becoming a music journalist dwindled when I decided I couldn’t be bothered to join the rat race in London after uni, but I carried my love for it throughout my life, a soundtrack to everything I do.

At work, I’m the one with the earphones, nodding away as I type, making playlists on YouTube and saving albums on Spotify to run to later.

In the kitchen you’ll find me dancing around the washing up with XFM on, and in the van I’ll sit there singing my heart out, even at the lights.

Silence is not really a thing for me.

To run to music gives it a whole different dimension. It makes me run harder, smoother, for longer. It’s a party in my ears and I’m the only one invited.

There’s been several occasions when I’ve been running along my favourite undercliff path early morning before work, the whole place to myself, sun peering out from behind the clouds, singing at the top of my lungs.

A trip down memory lane

Other times, like last Sunday, my 15 mile run took me on a trip down memory lane, to what me and Chris call our ‘summer of love’ (i.e. 2003, 17 years old, mildly intoxicated and wrapped up in each other and the newly emerging British indie scene). I listened to Elbow’s first two albums, Asleep in the Back and Cast of Thousands, Doves Lost Souls, and then Kings of Leon’s new album Walls (which I currently CANNOT stop listening to).

Just, lovely. (Incidentally, I ran 20 minutes more than was on the plan and my legs still hate me, just to finish an album).

But sometimes, just sometimes, I try/have to run without music, and it doesn’t always work.

The other day, my JABRA bluetooth earphones battery was dead and I had to do my threshold intervals ‘alone’, with nothing but my breathing and the sounds of the sea crashing into shore.

It was a grey, misty winter’s morning, the seafront was scattered with runners and dog walkers disappearing into the fog. At first I was really pissed off that I had to do one of my hardest sessions without some angry guitar for a boost.

And I’d like to say as the run went on I became less pissed off and was flooded with endorphins, but alas – it was just hard.

I did learn a few things about doing intervals to no music though:

1) Six minutes effort is a BLOODY LONG TIME.
2) 90 seconds is NOT.
3) Just because it’s foggy, people can still hear you swear.
4) The sea crashing into the shore is actually quite meditative.
5) My foot strike is too loud.
6) I can’t jump over small dogs.

So in short – I think I’m made for running to music – it just works better for me, and I wanted to big up my earphones with you guys in case you’re in the market for some gooduns. 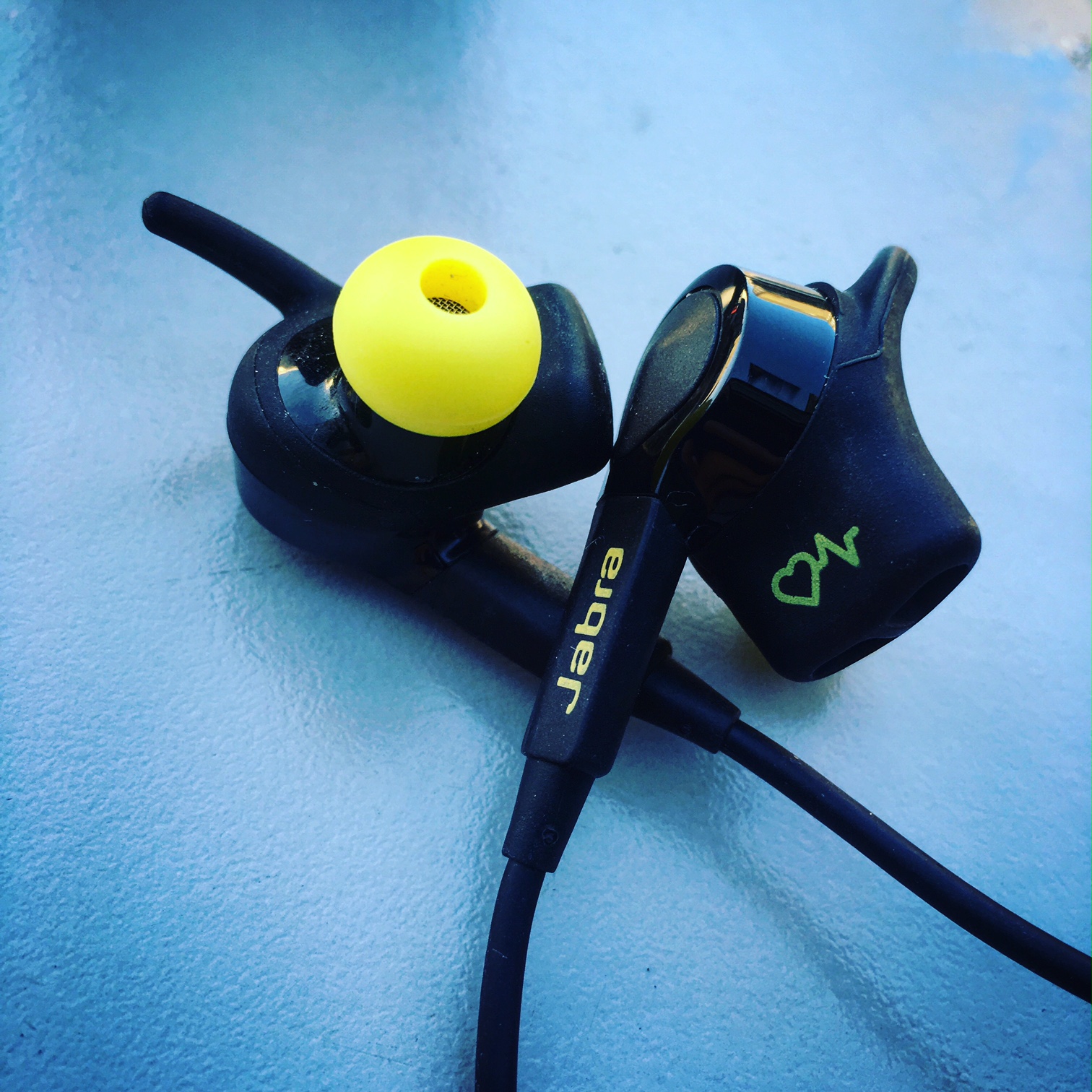 I was sent the JABRA Sport Pulse earphones a few months ago to test out and I have to say I proper love them. The fit is snug AF, there’s no way they’re coming out mid-run, however sweaty you get. On the website they’ve got people doing backflips to demonstrate the fit. I’ll leave that to the professionals though…

Being big into music, sound quality’s pretty important for me, and these earphones really do put out a banging range.

They’ve got an in-ear heart rate monitor – a weird little worm-like thing that sits in the curve of your ear, and there’s an app that tracks your runs and rides, and has pre-set workouts to follow. I tried the app but tbh I prefer to just use them for the music, as I use Strava mostly anyway.

Another big plus for me is I no longer have to faff about with earphone wires when running. I cannot count the times I’ve stopped mid-run to have a tantrum at bastard wires flapping up and down in my face with every step. These have a small wire that sits behind your head with an easy-to-use volume and function button to control your phone with on the go. 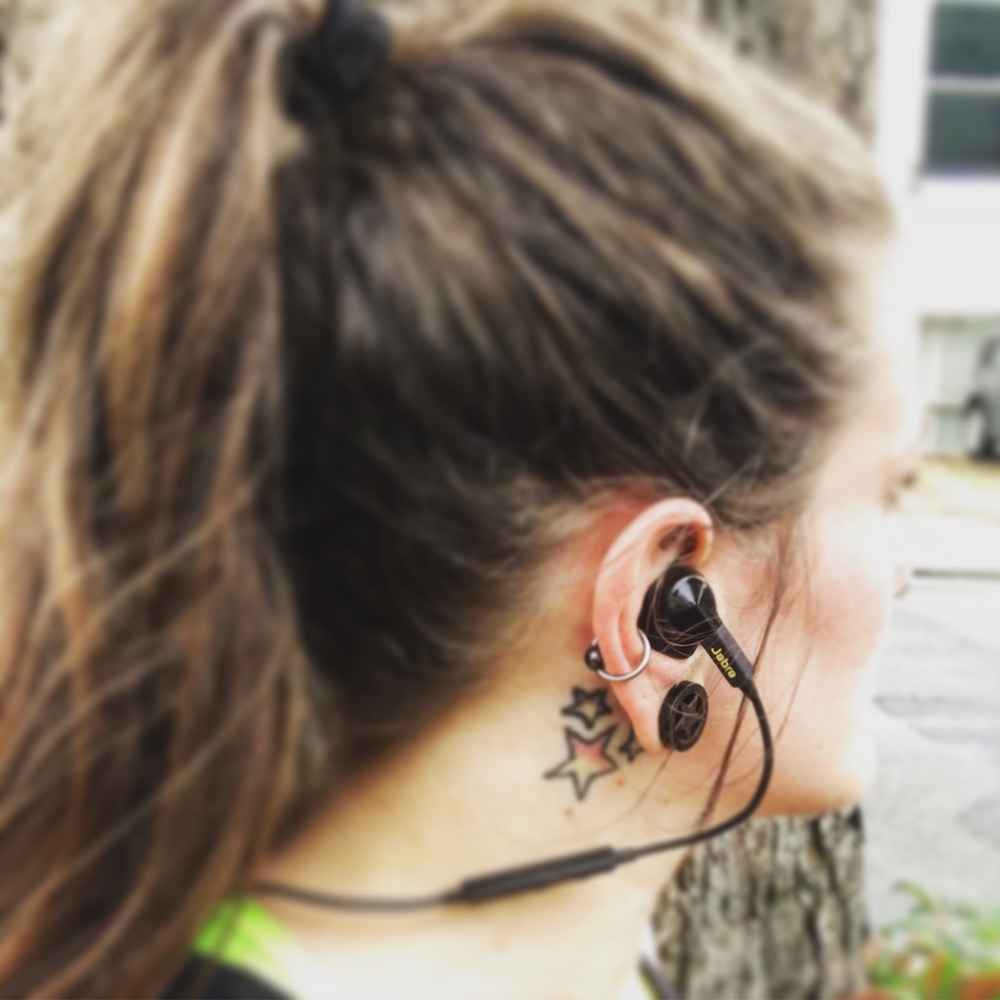 They’ve also got a built-in mic so you can take calls too, although I never answer the phone mid-run as the panting sounds a bit ominous, but whatever floats your boat.

Be warned though – the fit is so snug, you literally can’t hear anything when they’re in, so be careful if running on roads. I’m lucky as I’ve got the seafront so I can whack the volume up nice and high.

At £129.99, they’re not cheap, but it’s up to you what you want from your earphones I guess. I’ve actually had these nearly a year now as I was out of action for the summer from my collarbone break so have only really just been testing them properly for this marathon cycle, so wanted to let you know what I thought.

* As mentioned, JABRA sent me these earphones to review bloody ages ago but my love for them is all my own 🙂

Do you run to music?
What’s your running soundtrack? 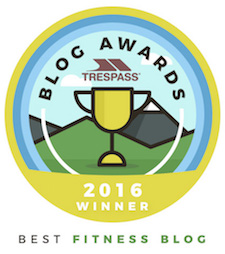