I spent nearly an hour in the kitchen prepping Monday’s food. I got seduced by the convenience of Asda’s smoothie bundle when I did the online shop this weekend (big windows – they saw me coming) so I’m starting the week with a coconut water, kale, watermelon and banana smoothie. Except it didn’t quite hit the spot taste-wise so I added some frozen berries and now it looks like pond sludge. 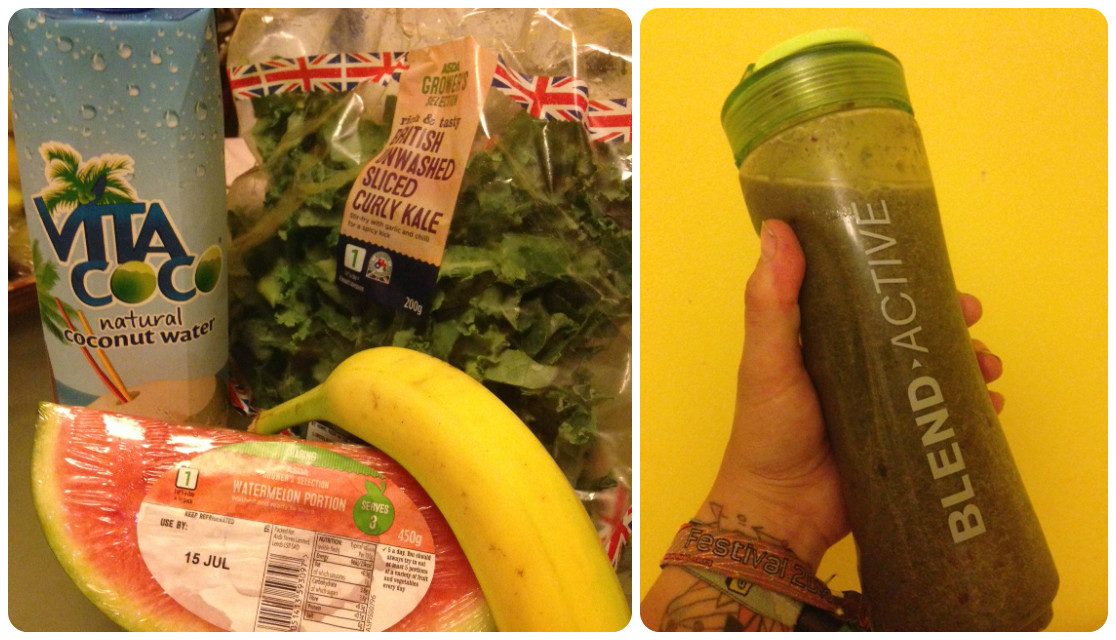 I’m excited to say that after my pretty impressive Glasto blow out and week-long recovery that ended with a skanky cold  (go hard or go home, kids), I’m well and truly back on the wagon. I’m eating mostly clean, back to training, and feeling organised, productive and ready to take on the world.

Or at least this triathlon, in eight weeks.

Last week I did something I always said I wouldn’t in case I get obsessed – I bought a set of bathroom scales. For the past couple of months, basically since boshing my PB at Brighton marathon, I’ve been feeling a wee bit stodgier than I’d like and could definitely do with losing a fair chunk of body fat. At 4ft 10 it’s pretty obvious to me when I put on weight, and last Sunday I weighed in at 59.9kg, a good 5kg heavier than I’d like to be right now.

Back in December when I started marathon training, I had my body fat measurements taken (it wasn’t pretty – 36.2% body fat) and promptly booked onto six weeks of twice-weekly PT sessions with Brighton PT Amy Jordan.

During those six weeks I was off the booze, mostly off sugar and trying to eat a healthy, balanced diet full of lean meat, fish and plenty of fruit & vegetables. My twice-weekly sessions with Amy focused on strength training while I took care of the cardio myself, and at the end of the six weeks I’d got my fat mass down to 31.7% and increased my muscle mass by 3.5%, gaining 1kg of muscle. I still had a fair bit to go (healthy body fat range for me is anything around 25%), but I felt fit, strong, and awesome.

The last time I had a body composition analysis was just before Brighton Marathon and I was convinced I’d put on loads of weight and had ruined all my hard work from the beginning of the year, but was relieved when it turned out I’d basically maintained.

I’ve spent the last week getting back in the zone with things and really being organised when it comes to food so I feel in control.

It really is all down to planning if you want to eat well – spending a couple of hours a week prepping my meals and snacks, and planning alongside my training makes sure I’m energised, focused and strong enough to train hard.

If I don’t plan my breakfast and make my snacks/lunch to take with me to work it basically all goes to shit and I end up buying processed convenience food from Tesco and feeling crap. I’m tracking my food on MFP and have hacked it to track Macros so loosely following an IIFYM formula.

The first few days were a bit tough with headaches and energy slumps as I limited my sugar and caffeine but once I got past Wednesday I was OK. It’s amazing how much what you eat and drink can affect your performance and general focus/productivity.

She says, all self-righteous.

Next week’s training isn’t fully set in stone yet but I do know that tomorrow at some point there will be a swim. And looking at the current time, I’m guessing it won’t be the morning.

Really need to get to bed earlier! This is my actual nemesis, I’m such a night owl. 1am though, that’s taking the piss. Shut up and get to bed Tess…

Do you train better when you’re in control of your diet? How do you stay on track?