I seem to remember sitting at my laptop on the cusp of week 4 of training for Brighton Marathon last year, wondering how the hell the weeks were going by so fast. It’s different this time though – I’m not so terrified.

I know I can physically do the distance, it’s just a case of how well I can this time round.

Comparing weeks one to three of training between this year and last it’s pretty clear that I’m in a much stronger position at this early stage. I’ve never really ran more than three times a week, and when I have I’ve been a bit broken, but I ran four times last week, cycled to work every day and had two PT strength and conditioning sessions, and I feel great.

I’m on a mission this year to build a stronger me, and am currently in week four of a six week strength and conditioning programme with Brighton Personal Trainer, Amy, from Love Life Fitness.

She’s been putting me through my paces in the gym, making me do all the things I don’t like doing, things that hurt because of muscle imbalances like weak hamstrings and glutes.

She’s got me playing with heavy weights and barbells (much to my delight), doing weighted squats, single leg deadlifts, goblet squats, box jumps, a host of proper hurty TRX core work and shit load of upper body work (I *WILL* do at least one unassisted pull up this year).

We’ve had the Swiss ball, medicine balls and Bosu ball out (press ups on the bosu ball can feck right off). Then there’s the machines too – the cable torso twists, pavlov press, hamstring curl, leg extension, all the things that HURT.

Basically, I’m making sure I’m as strong as I can be this time round and I’m already feeling the benefits (more on this later).

I feel more organised, mentally as well as physically and am in a better position to take on the big 26.2.

So organised, in fact, that I’m gonna lay my cards bare and admit to my (potentially obsessive) colour coded Google Training Doc. It’s the only way I can easily plan out my weeks and see what’s missing (or not) from my training.

For example, for the last few weeks I’ve been adding swimming to the schedule (colour coded green) but it’s been pushed out as things have got in the way or I haven’t been arsed. It just seems a bit more of a faff than chucking on the trainers and going for a run.

This is gonna change for the remaining weeks, I’m gonna try and fit in two swims a week, even if they’re only 30mins each time. I also need to make sure I fit in at least one yoga session a week whether that’s at home or in a class. I have a mat at home and have downloaded a yoga app so no excuses now.

Anyway, sit back and behold the product of my pedantry as I take you through weeks one to three of training for Brighton Marathon 2015:

Christmas week. A lovely break in rural France eating, drinking, running and being totally merry with life saw marathon training off to an epic (albeit heavy, slow and sluggish) start.

Four runs down. One PT session. One bodyweight circuit. Infinite pieces of chocolate and glasses of wine to refuel.

Week two was a bit hard to fit in the prescribed runs due to travelling back from France and having stuff to sort out once we got back. Still got my PT sessions in though and ran a tough but glorious Longman10 race over the white cliffs of Beachy Head. 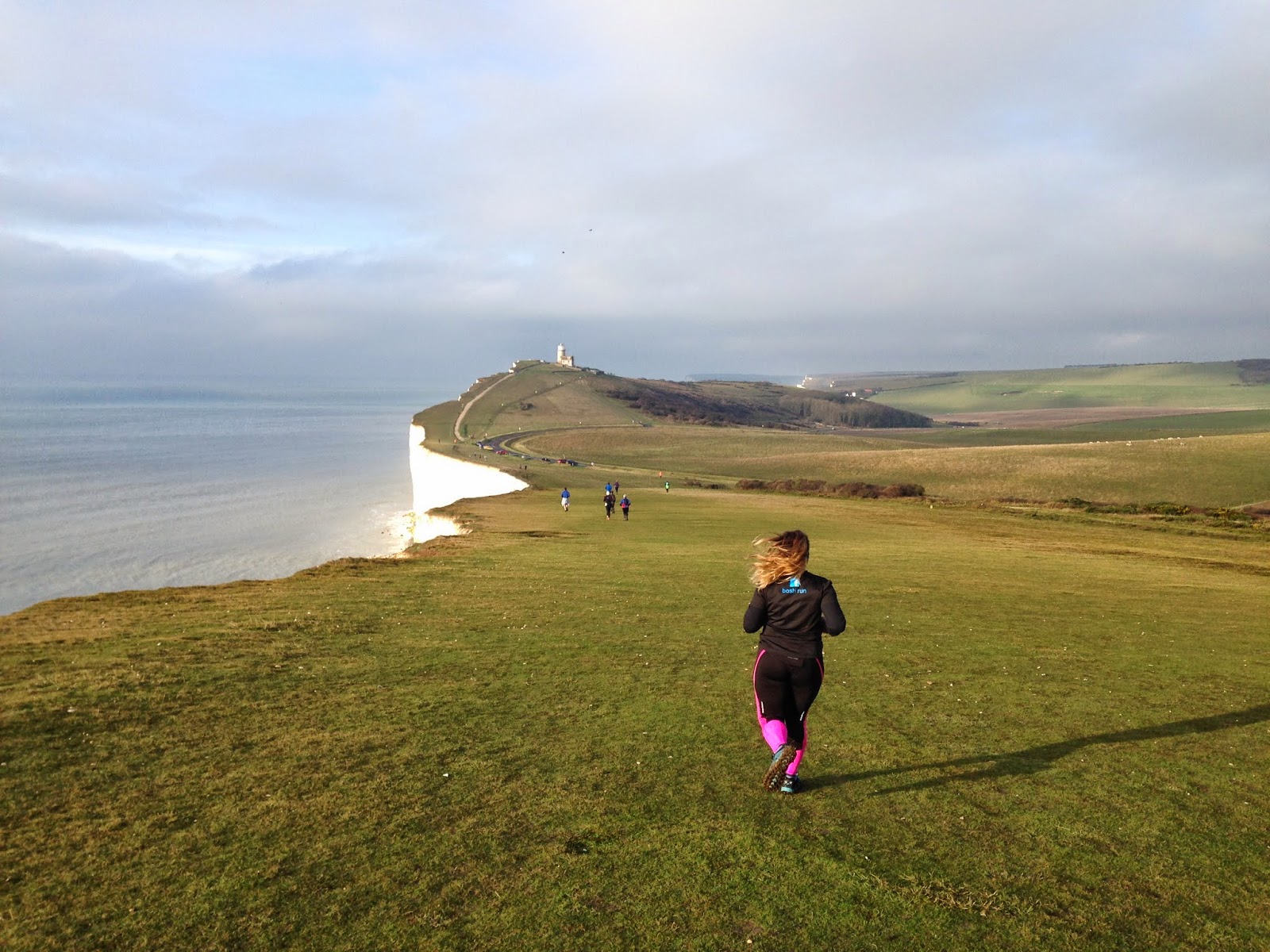 Week three has been the best so far. Back to work means back to routine and we all know that means better eating, sleeping and training.

I’ve nailed the eating, just need to get to bed earlier.

Again though, the swims were pushed out as I couldn’t be arsed on the rest days, and no yoga but gonna sort this out for week four.

This week there are four runs, two PT sessions and two swims on the plan. I’m gonna try to do some yoga at home and if this doesn’t work, sort out a class. If someone would like to give me some money and pause time so I can do all the classes etc. I want to that’d be great!

Bring it on, Brighton!

Are you marathon training, and if so, how’s your training going? Are you trying to fit in cross training and strength/yoga work?

If you’re in Brighton and are looking for a good PT I can’t recommend Amy from Love Life Fitness enough. I’m gonna continue training with her throughout the year to stay strong for Fort William Marathon too 🙂