Learning to swim, the final chapter? –>

Tonight, ladies and gentlemen, we have a breakthrough. I swam my first full length front crawl without stopping! After my lesson tonight (which was on butterfly and was loads of fun!) I braved the slow lane and decided that I wasn’t getting out until I made it to the other side in one go.

It took a few attempts, most of them ruined by people ambling across my path or standing around having a chat, but in the end I did it, and let out an actual ‘YESSSSS’ to the pool when I touched the other side. Another swimmer noticed my grin and congratulated me.

‘Practice. Just keep practicing and it gets easier’, he said.

I can totally see that now.

I didn’t realise I’ve only been swimming since 19th May. That’s just under a month. In that time I’ve had four lessons, each on different strokes and with varying levels of flapping/spluttering/water up nose/success that went a bit like this:

The reason I started to learn to swim was mainly because me and Chris wanted to do a triathlon this year but also because I wanted to build my water confidence up for kayaking and give me something low impact to keep me fit that I can do alongside pounding pavements and trails.

I honestly didn’t realise when I signed up for lessons that it would be so hard. I’ve only been practicing front crawl as to be honest it’s more than hard enough without having to factor in the other strokes and I’m on a bit of a deadline if we’re gonna get a triathlon done this season.

Twice a week on top of my lessons I’ve been down at Prince Regents Swimming Pool in Brighton, dutifully practicing the drills we learnt in the first lesson, with elements from the others such as kick offs, glides and hand turns mixed in. I didn’t make much progress until I started using my nose clip, which I didn’t really wanna do but it’s allowed me to stop worrying about water going up my nose and just get on with the task in hand.

I may have shot myself in the foot a bit as I can’t do it without now, but I’ll deal with that later.

I started using my nose clip around the same time that I discovered the ‘Adult Only’ swim in the shallow pool. Recommended by a friend (or fellow #swimmingbint as we like to call ourselves), the Adult Only time in the shallow pool means exactly that. Just adults, mostly learning to swim, some doing rehab and physio exercises without hundreds of kids splashing and playing around you. 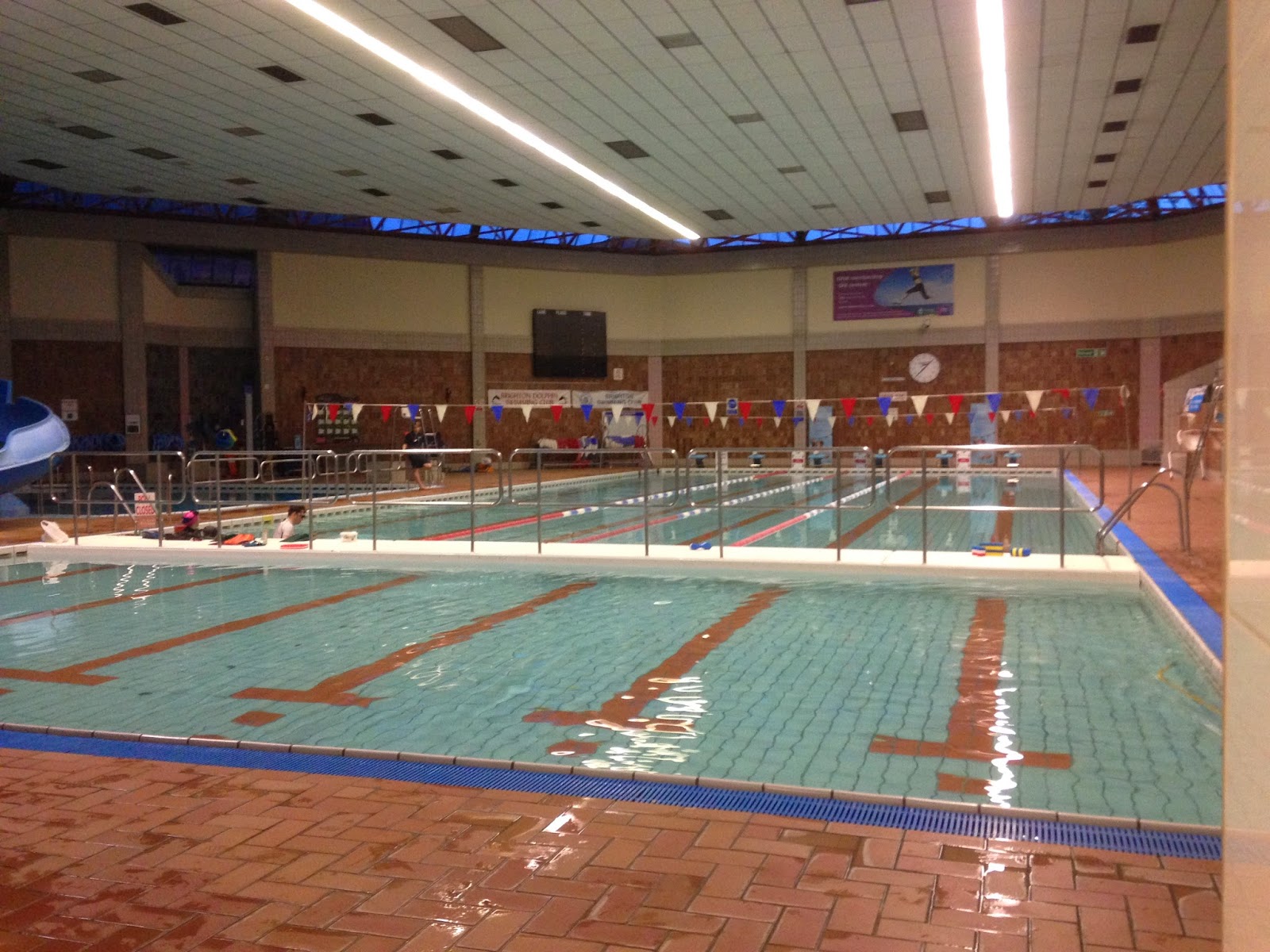 Since doing this I’ve progressed massively, first doing just widths, which is basically a quarter of a full size length, then moving onto lengths, which is half of the full pool, so 12.5metres. Me and Nik have been practicing with pull buoys to get the arms and breathing sorted, as well as going solo to combine the arms, breathing and kicks. The lifeguard wouldn’t let her have her flippers though, which we were quite upset about.

My stamina is the problem really. It’s bloody hard work and my technique is very inefficient so I get out of breath, but of course I can’t just breathe heavily like I do on a tough run – it’s pretty difficult to breathe under water, so I’ve discovered.

Tonight I slowed it right down and eventually made it to the end. I think because I said to myself that I wasn’t getting out until it was done, I had to push myself. I had a bit of a breather and then swam another length back again, although this one was a lot messier than the first, but I got there nonetheless.

So, it seems there are a few things that have helped me progress better with front crawl:

I *might* get in the big pool this Thursday to see if this whole proper length thing is a fluke or not. If I can do it I might even have a go at two in a row, but shhh don’t jinx it…

Are you learning to swim or are you a good swimmer already? How can I improve my stamina?

Learning to swim, the final chapter? –>