OK so you know I said my knees were back in action and I was gonna try a long run this weekend to make a decision about Run to the Beat? Well, yeah. They’re OK, but not half marathon OK. 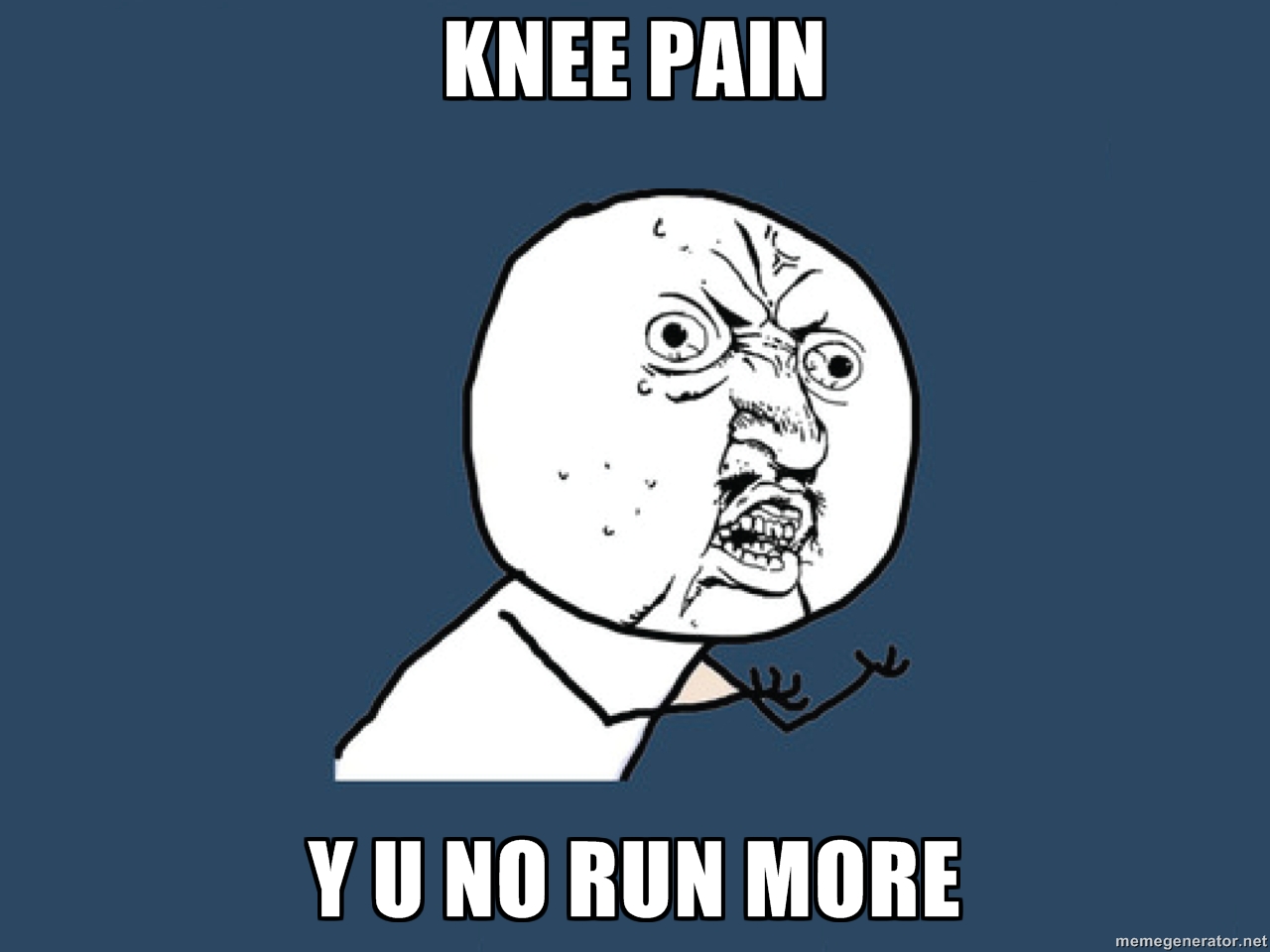 I *can* run again, up slopes, stairs and stones, and through the woods, which is a massive improvement on this time last week, but not for more than a few miles without them niggling again and I’ve got too much coming up to plough through it and risk giving myself a proper injury. There just wasn’t enough time to recover properly and pick training back up again.

So, as much as it pains me to say, I’m pulling out and donating my RTTB place to a friend, who has much better knees than me (and will run a much faster time regardless of whether his knees were bad or not). Not sure he’ll be up for wearing the size small women’s fit tee though, but we’ll see.

What the hell’s wrong with my knees anyway?

Apparently I’m suffering from anterior knee pain, caused by patella mal-tracking, which is very common in runners, and more prominent in women due to us having wider hips and therefore greater risk of the patella misaligning (yeah, nice one, God). The patella is the knee cap, and patella mal-tracking is where it misaligns and moves excessively, grinding crunchily on the cartilage and bone underneath instead of sliding smoothly over a groove on the femur when the knee bends and straightens.

There are various causes of this but a common one is muscle imbalance, which is what I’ve got. My inner quads are not as strong as my outer quads, so the muscle imbalance pulls the kneecap too far one way and misaligns, causing grinding, pressure, inflamation and a world of pain. Sometimes it clicks and crunches too, which is just delightful.

My knee pain first started to appear after exercise, and sometimes during, but was not much more than a niggle. Eventually it got worse and progressed to sometimes hurting even when I was resting. Like reeeaally hurting when I was just sat doing nothing. After a stern talking to from the boy and also my Dad who’s had an op to remove part of his knee cap (yum), I went to my GP who promptly told me to stop running and sent me on my way.

I wasn’t having any of that so went to a physio who knew what was wrong with me and how to fix it. See sexy sketch above ^^. *Edit – I’ve since been to another physio recently and have more exercises to work on to improve strength in my glutes, calves and increase balance and control.

I also got my gait analysed, and found out I was wearing the wrong trainers for my feet (I had shoes for over pronators, and my gait is neutral). Wearing the right running shoes for your feet is so crucial – it might be tempting to buy a pair of £20 trainers in the sale at Sports Direct, but if you’re going to be doing any serious mileage you need to make sure you have the correct cushioning and support.

Steer clear of the bargain high street stores for that first purchase and get down to your local pro running shop to get tested. Sweatshop offer a good (and no obligation to buy) gait analysis service along with great advice on choosing the right shoes. They let you try a variety on and have a go running on the treadmill to see how they feel, so you’re not just taking their word for it. I’ve currently got my eye on these beauties – and keep having arguments with myself over whether I can justify them when I can probably get another pair of the Asics that I always buy for cheaper elsewhere online.

Once I had the correct trainers for my feet the severity of the knee pain was alleviated immediately. In addition to this, the exercises I was given to strengthen the quadricep muscles (and some exercises for my weak ankles too), really helped, and it’s only because I’ve picked the running back up recently and stopped them that it’s flared up again. Well, that and climbing bloody mountains.

Being completely out of action after the painful descent from the summit of Ben Nevis really put the shitters on me so I’m definitely gonna take more care of myself and focus on recovery from now on. Which means, no half marathons with improper training and niggling knees, as much as it annoys me to say so. Colour Run though, is a big fat YES. (And mayyyybe the London Duathlon, but more on that later)…

Have you got dodgy knees or joints? Do you run through ‘niggles’ or listen to your body and rest? What do you think of knee supports?