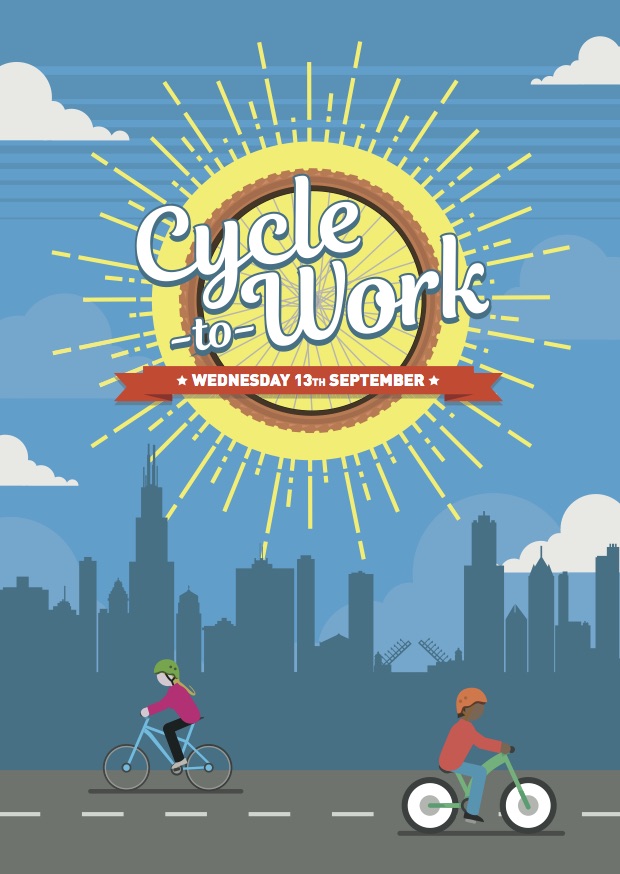 I’ll be heading out into 40+mph headwind for my 12 mile commute, which will probably be just as much fun as it sounds. I’m doing it anyway though – mainly because I’m stubborn – and also because I’ve made a promise to myself to really focus on improving my cycling fitness and strength this autumn and winter.

Not many better ways to embody Rule 5 than to swap this ‘fair weather cyclist’ skin I’ve been wearing for a battering from the wind Gods, is there?

I’ve been cycling to work for all of my professional life. My current trusty steed is three years old this year and she’s deffo done the miles. My typical 2-3 mile each-way ride to my previous few jobs has been replaced with a nice chunky 12 mile EW seaside commute to Worthing two or three times a week for one of my clients.

In June when I started my freelance adventure I was working in Worthing up to four times a week so got pretty used to the miles but now am back down to two so need to make sure I continue throughout the autumn and winter – even when it’s horrendous wind like it will be today.

What doesn’t kill you, and all that. 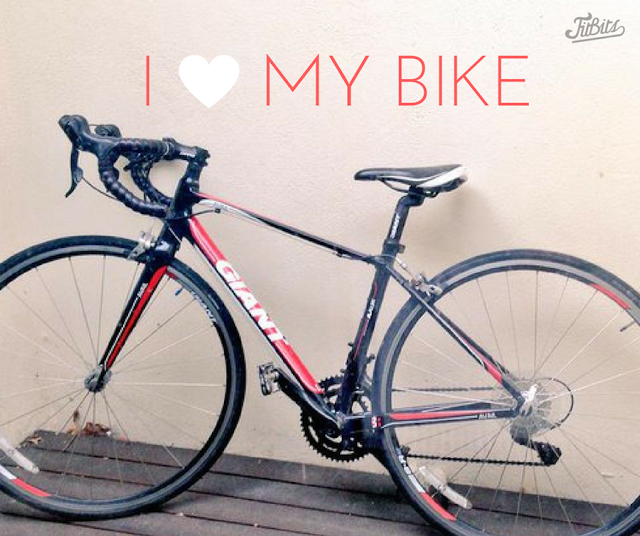 Cycle To Work Day – in its fifth year – is an annual initiative from Cyclescheme and Halfords to encourage more people to ditch the car or train and take two wheels to work and feel the benefits of active commuting.

Increased workplace productivity, lower sick leave rates, improved wellbeing – and generally that post-ride buzz you get after a good sesh in. Even when my commute was only 15 mins (8 mins was my record if I *really* stepped on it), I loved getting my quick endorphin fix before hitting my desk all day.

And the ride home always clears my mind from the day’s stresses, no matter how fast or far it is.

Recent research from Cyclescheme shows that cycling to work can have real workplace benefits, with 45% of the 10,276 surveyed employees who cycle experiencing less stress at work, and 45% citing improvements to mental wellbeing.

Getting to work on your bike can also mean less illness and fewer sick days, saving the economy an estimated £83 million each year, according to a publication from Cycling UK.

What’s not to love? 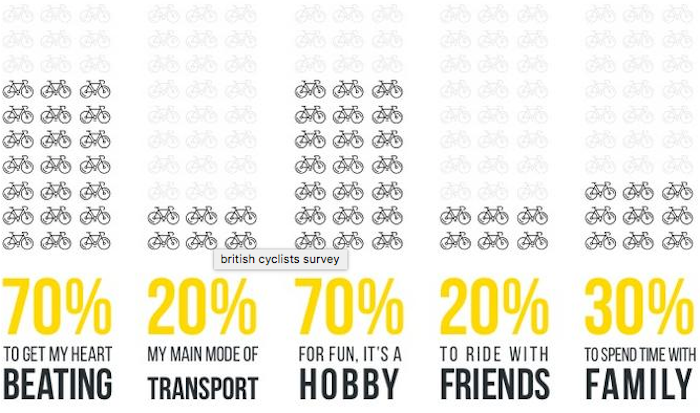 As well as mental health and wellbeing, cycling to work is also great for general fitness. I have to say that even though my previous commute was only 2-3 miles each way, I was doing it every day, and now as much as I love my 24 mile twice-weekly round-trip, I feel like I’ve definitely lost a bit of bike fitness.

I guess not having an office to commute to for half of the week doesn’t help – maybe it’s time for me to ‘commute’ to my standing desk in the living room?!

Another recent survey, this time by Cycle Republic found 70% of respondents rode to get their heart beating, with 20% using it as their main mode of transport.

I know I could tick all of the above as reasons for why I ride – what keeps you getting out on your bike?

It takes approximately four days of rush hour traffic to completely merge the body of a seagull (or squirrel, pigeon, INSERT ROADKILL HERE) into the tarmac. I know this because I’ve ridden past enough casualties enough times in one week to gauge 🙁 (I’ll save you the pictures).

I’ve been lucky enough to never see an animal actually get hit – they’ve always been very, very dead by the time my wheels have swooshed around-not-over them.

I think if I ever did see it happen I’d probably throw my bike to the kerb and risk my life to save the poor thing, so probably a good job I haven’t!

Side note: a pheasant legit flew directly into my van windscreen on my drive to Wales this weekend. The noise will haunt me forever, as will the wonder of whether it too merged into the road! 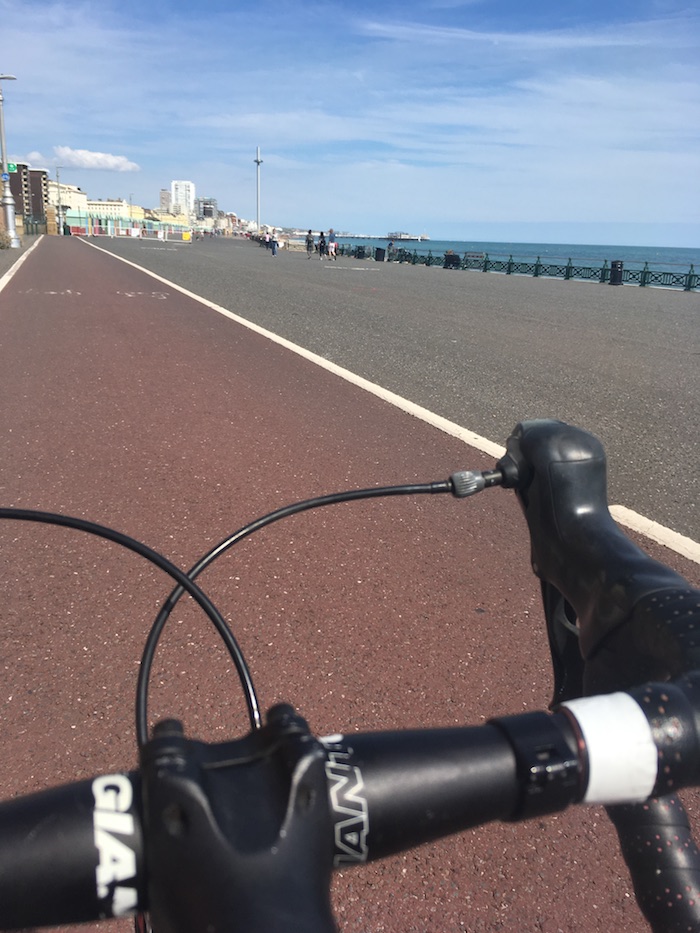 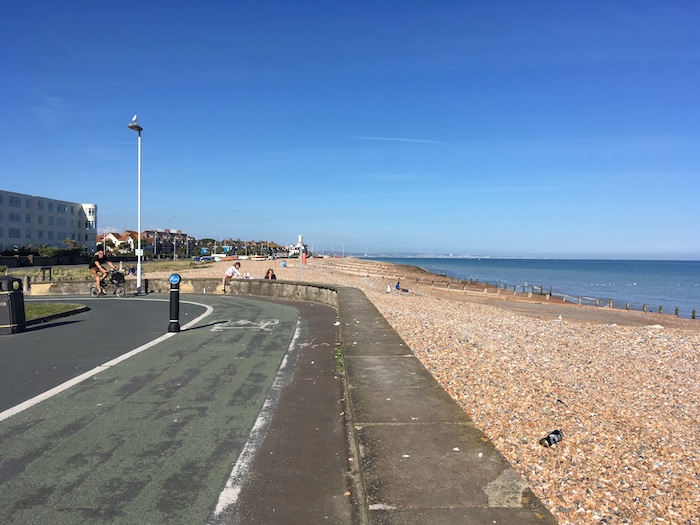 It’s a fast, flat ride between Brighton and Worthing, taking in parts of the cycle paths on both seafronts. Brighton’s is lovely and smooth, with clean lines and zero wear and tear, despite the motorway of cycle-traffic that rides its surface on a daily basis.

It’s roomy enough to overtake, and a real pleasure to crank up the gears and go for it.

Worthing’s seafront cycle path though. Nah mate. If I fancied a vibro plate workout I would’ve gone to the gym. Needs complete resurfacing and remarking, as well as widening, whilst they’re at it.

Apparently the Department of Transport’s recommended width for two-way cycle paths is 2.5m and this one comes up well short at 1.45m. This basically means overtaking has to happen on the adjacent (and extremely smooth) footpath, so lots of cyclists (me included), weave in and out of unsuspecting pedestrians, as they enjoy their flawless, silky-smooth footpath all to themselves.

I have to admit I do take great pleasure in cruising along almost empty sections of road whilst a mile-long tailback of cars and lorries queue for a roundabout and beyond on the other side.

If I leave too late in the morning I get stuck with the traffic on my side too, and now the summer holidays are over the school run brigade will be back out in force so if you’re nervous about traffic on the road, leave earlier and ride like you’re driving.

That means stopping at lights, indicating when you want to turn, and generally not being a dick.

Read my tips to becoming a better road cyclist here.

Wouldn’t it be nice if everyone just used their legs a bit more so we can all enjoy a bit more space?

When I started this longer commute I asked my lovely Twitter followers for pannier or cycling rucksack recommendations. I then promptly did sweet FA with the helpful suggestions that came flooding in, and still haven’t bought anything.

Which means the past few month have been spent wrestling my way to work with what feels like everything plus the kitchen sink on my back in a less than suitable rucksack. I either need one that’s ergonomically fitted for cycling comfort, or to set panniers upon my trusty steed.

And that means I basically need a new bike too, because I definitely cba to take the panniers off for long rides or races, that sounds like far too much faff to me.

Even better if it’s matching 😉

I’ve spent enough money on kit in the past to know that if you buy cheap, you buy twice. And spend half your ride adjusting everything or nursing chaffe marks afterwards.

It’s only in the last two years that I’ve really started to opt for better quality, technical fabrics that are purpose-built and good to last.

This summer I’ve been lucky enough to test out some ace kit from Le Col, Kask and Chapaeu, and have bought some other staples like a solid waterproof jacket from Gore Bike Wear (very useful when it buckets it down in Wales!)

My first foray into bib shorts also happened on this longer commute, and whilst it’s made me feel like a ‘proper’ cyclist, there’s definitely a bit of a learning curve too (let’s just say going to the loo in the winter must suck big time).

But don’t let that put you off – get on yer bike! Not just for Cycle to Work Day, but every day!

For more information on Cycle to Work Day visit www.cycletoworkday.org.

How do you get to work?
Would you like a more active commute?