I’ve just spent far too long giving my attention to the journalistic abomination that is the Daily Mail. The latest scaremongering to grace your screens, titled in true Daily Mail make-a-scandal-out-of-everything style: 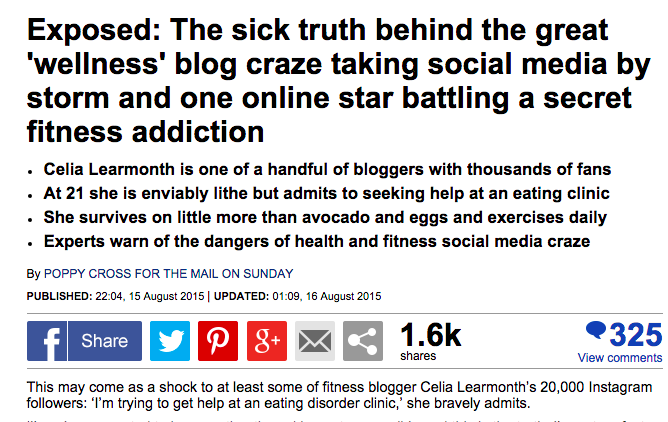 I’ve got a few things to say about this article, and not all of them negative.

Firstly, how brave the featured fitness blogger Celia has been in ‘coming out’ about her struggles with body image, weight and unhealthy eating habits. It takes a lot of courage to put a true and honest self out there when we are bombarded every day with so many streamlined ‘bikini bodies’ and abtastic ‘fitspo’.

I think it’s really important to highlight the fact that how ever much we deny it, we do put edited versions of ourselves online. I mean honestly, can you tell me that you posted the very first selfie or food shot you took onto your Instagram, or did you choose the ‘best’ from a selection?

I wrote my dissertation in 2007, just before Facebook overtook MySpace, about online identity and how our photos portray our preferred version of self on MySpace, exploring the famous ‘MySpace pose’ which was adopted by so many. There was no word for it then but what I was exploring was basically the science of the selfie. I interviewed a cross-section of people and they all told me the same thing – the versions of themselves that I saw on their profiles were carefully edited highlights.

This hasn’t changed, for Facebook, Instagram, Twitter or any other social network. I’ll admit freely to you right now that the photos you see on my Instagram feed are my preferred ones from a collection of duffs that swiftly made their way to the trash folder on my phone when I deemed them not good enough.

That doesn’t make it fake though. I do take great pride in being honest on my blog and social channels, if you read my blog regularly you’ll know that what you get with me is a warts ‘n’ all account of my fitness shenanigins – from the shit runs to facing up to fears and failures.

The photo of me squatting a barbell in the gym might be my preferred version of it but I’ll still tell you how I can’t lift 25kg over my head yet.

That grinning photo of me with my arm in the air having just PBd at Brighton Marathon was the best of a few but I’ll still tell you every second of how I got there in training and throughout the race – including the days I just couldn’t be bothered to run, was in a lot of pain or needed to just take a step back and be kind to myself.

The photo of my breakfast that invaded your Instagram timeline came out on top of about six or so others taken from various angles, but I’ll always tell you about how hard it is to stay on track and eat clean full time.

In fact this weekend I’ve done no exercise at all because I’ve been out with friends, drank several cocktails and feasted on pizza, sweets and cake. I do feel a bit crap right now and will totally get back on it this week but what I’m saying is it’s all about finding a healthy balance between keeping fit, eating well and actually having life outside of fitness. It’s a lesson I need to relearn all the time when I’m feeling guilty or ‘fat’ because of indulgences.

I think it’s really important in this social age that we explore and talk openly about eating disorders, body image and the misrepresentation of what is ‘perfect’ in the media. I spent most of my childhood hating my body and dealing with people telling me I was fat, getting called Oompa Loompa (fair play to them, my dad did make me dress up as one for the carnival in year 5).

I grew up in baggy t shirts and backwards caps, distracting myself from my self-loathing by calling myself a tomboy and messing about on my BMX with the boys. But whenever the words ‘fat bitch’ or ‘oompa loompa’ were pelted at me I’d break a little more inside.

I kept a diary all throughout my childhood and teenage years, and in the loft at my family home there’s a box of old notebooks showcasing a host of insecurities, worries, self-hate and doubt. I remember scrawling just the word ‘fat’ over and over and over across multiple pages one evening after a pretty shit day at school.

So, yes, I think it’s important to realise that we humans are fragile, emotional, impressionable beings, and that yes, the fitness community on social media does have a lot to answer for in feeding these insecurities with its hashtagged, photoshopped and airbrushed shots of perfection.

But to tar all of us fitness bloggers with the same massive sweeping generalisation is not necessary, and typical of the Daily Mail creating scandal to gain pageviews.

The language used in the article, starting at the very top with the headline, has been used to shock, to scaremonger, to uncover the ‘sick truth’, claiming social media can ‘infect’ others with eating disorders.

I appreciate the sentiments of the article and understand the importance of highlighting this stuff but the way this newspaper goes about it with its harsh, accusational tone, massive generalisations and unashamed hypocrisy is quite frankly, obsurd.

Just a quick scan down the sidebar of shame and you’ll see the following headlines (in that literal-non-headliney Daily Mail style):

And then there’s two stories about Chloe Goodman (I don’t actually know who she is), one flaunting ‘ample cleavage and svelte waist’, and one cutting an ‘anxious figure’ as she takes her dog for a walk.

The second ‘article’ outlines how she ‘wore minimal makeup for the occasion’ and had lost a stone in her pre-summer workout to get her ‘beach body’. 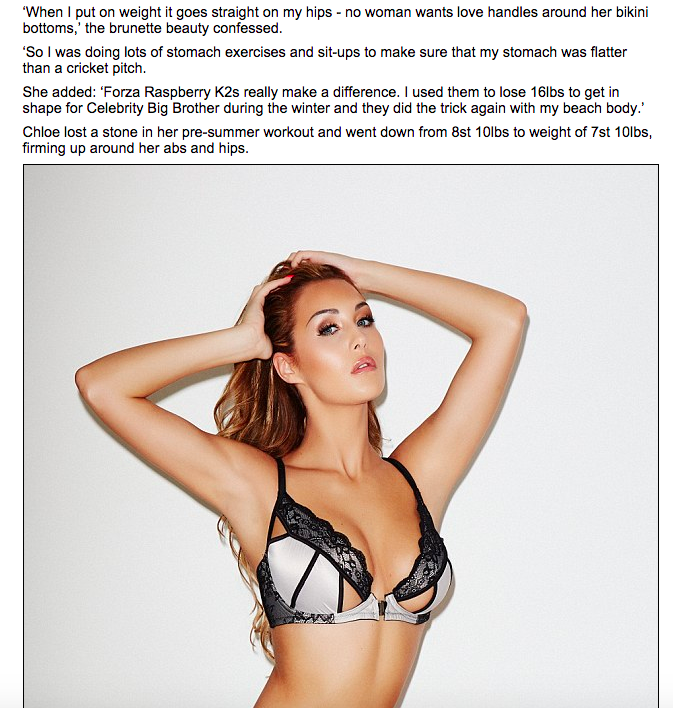 The ‘story’ about Chanelle Hayes (again, I don’t know who this is), ‘displaying’ her fuller figure on holiday features photos of her ‘snacking consistently’ on crisps and ice cream, describing how her ‘strict diet regime had gone completely out the window’. 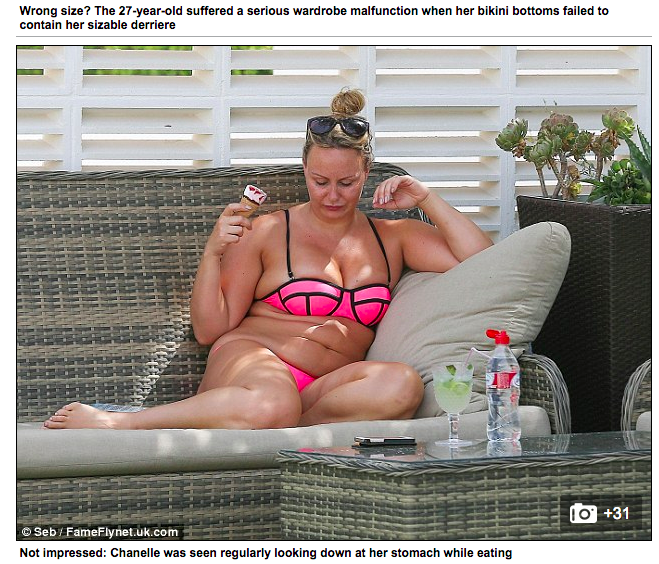 And then only five days ago did The Mail Online publish its top 10 fitness Instagrammers who are inspiring thousands to shape up.

I hope you get where I’m going with this. Whilst I agree that social media has a big part to play in reinforcing insecurities, body-shaming and encouraging unhealthy eating and exercise habits, I think the Daily Mail is the biggest hypocrite of them all, making ‘news’ out of nothing, invading privacy to publish body-shaming photos and articles about normal people doing normal things like EAT ICE CREAM ON HOLIDAY.

Creating scandal out of everything, scaremongering and clickbaiting, feeding into your own insecurities to keep you on site. Making you gawp and scroll endlessly through meaningless, superficial drivel.

It’s a serious case of the pot calling the kettle black and I think we need to worry more about the power and influence the Mail Online and similar publications have over thousands of their readers every day to make us want to look a certain way and strive for the perfect ‘beach body’.

I want to make it clear that I’m not belittling Celia’s story or anyone else suffering the same thing in any way, I’m just making observations about the way it’s been reported and uncovering a few ‘sick truths’ about the Daily Mail myself.

I’d love to know what you think!

It’s now wayyyy past my bedtime and I probably won’t make my morning workout because of this but I just had to get it all out! That means because I’ll have time, you can expect a (carefully chosen) healthy breakfast pic on my Instagram tomorrow 🙂

What do you think about the Daily Mail and using social media for health, fitness and wellness inspiration?