How do I even start to tell you about my Brighton Marathon experience this year?

My epic, awesome, run-of-my-life Brighton Marathon 2015? It was the kind of run where you can’t stop smiling, where no matter how hard it gets (it was hard), how much it hurts (it hurt), you just keep  on running and even have it in you to speed up at the end, just because you can. Just a bit different to the finish of my first attempt, last year.

I’m a little bit ashamed to say that I started to count the number of people I picked off during the last few miles but lost count at 55 and got distracted by a water station.

Does that make me an arsehole?

The final weeks leading up to the race had been shrouded in the all-too-familiar maranoia and last minute niggles that come with the territory of tapering, but as the day grew closer and my tight hip and hamstring loosened, followed shortly by my knee calming down and twinges disappearing, I grew (not-so-quietly) confident, as well as apprehensive, and excited, and nervous…

Basically I was bouncing off the walls and everyone knew about it.

I didn’t have that gripping fear from last year; the terror of the unknown – would I make it to the finish? Can I run that far? I know it took me a little longer than it should’ve done to run in training but my 20 miler a few weeks previous had put me in good steed and I knew the only thing that would stop me getting that medal would be if my knee was a total bastard and flared up again.

Thankfully, I didn’t feel a thing from it – not even the tiniest niggle.

Thank you knee, I heart you.

Right from the start I made a conscious effort to slow down and keep to my planned pace of 10:45-11min/miles to come in around 4:45-4:48. I was about a minute or so out from the splits on my pace band but this gap gradually grew to about 5 or so minutes as I walked through most of the water stations (there were so many), and stopped to stretch my tight hamstrings and calves.

Here’s the thing, folks (first time marathoners, take note): if something needs stretching at mile 8 it’s gonna get a whole lot worse by mile 22 so you might as well listen to your body and give it some love. Unlike last year where I gave up at points and just didn’t have the energy to carry on running, the ‘wall’ never really came for me on Sunday.

Yes, some of the latter miles were slower, and yes, I lost time at the water stations and by stopping to hug and high five my amazing cheerleaders but it was a beautiful, hot day and I didn’t fancy trying to run with paper cups since now that race organisers had moved away from the handy plastic pouches.

I didn’t panic about stopping or slowing at any point; didn’t feel disappointed or angry with myself for walking like I did last year – I’d stopped to stretch on many long runs before and it’d never cost me much time. I told myself from the start that I would run past the point at mile 15 last year where I first stopped with pins and needles, and I wouldn’t walk between miles 16-20 apart from at the water stations. The #UKRunChat support station down by the lagoon going into the ‘road to hell’ (aka Shoreham Power Station was epic too and great to see the amazing online community we’ve built spill out into ‘real life’ 🙂

When I got to the power station stretch I stuck both earphones in, took it by the balls, and got it done, promising myself only to walk at the water stations or just before the turn point. Soon I was on the home straight and facing the right way to the finish – albeit four more miles away. I spent the whole race high fiving other BOSHers, cheering friends and smiling for photographers.

In fact the smile didn’t really leave my face, even when it got tough down by the power station. I hugged my cheerleaders around the course, ran part of the way with friends while having a chat, cheered friends and those in fancy dress or who looked like they were struggling. 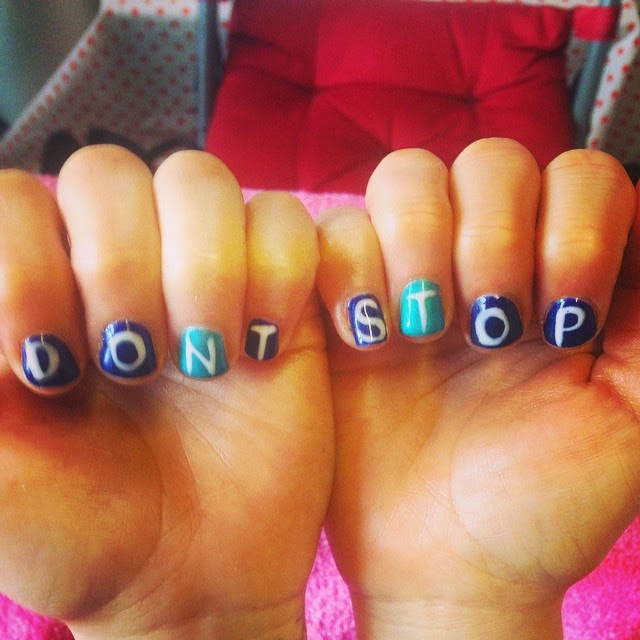 Saucony had put on a great cheering post down at mile 22 with a massive screen showing runners’ prerecorded personal messages of support from loved ones and a volunteer shouting support on a tannoy. You can have messages filmed at the expo before race day and then be played back to you as you approach the screen. Next year I want a message!

At the end of the power station stretch when Mile 23 and the amazing BOSH cheerleading squad came into sight I literally skipped, jumped and whooped my way through, high fiving and cheering as I went. I’d been looking forward to it all week and it really made my day to still feel so strong at that point. The support there and all around the course was just immense.

Three more miles, and PB glory was mine.

I checked my pace after that and slowed down again because I didn’t wanna burn out for the finish, but soon realised I had a whole lot left in the tank and spent the last couple of miles speeding up, joining another fellow BOSHer for my last (and fastest!) mile of the race, ending in a glorious, heart-clutching, can’t-breathe, give-it-all-you’ve-got sprint finish.

Once again I fell into the arms of the RunBrighton volunteers who personally saw to it that we got our medals from them, (thanks Daz & Lee!), and stumbled off in a daze of endorphins to collect my bag and find my family and friends.

I felt amazing. Invincible. Unbeatable. I never imagined that I’d have ran so strong, I’m so surprised, and proud of my body and mind for all that I achieved that day.

It really was the run of my life.

The key with this marathon for me is I felt capable from the start. All through training I knew I could do it, and all through the race I knew I had time, I knew how to pace myself. I got the fuelling spot on (a few days of gradual carb loading and during the race a mix of gels, shot bloks and gatorade), and although I was ready for it, the wall never really came.

I know a lot of people didn’t like the cups now that it’s been changed from the handy plastic water pouches and bottles of Gatorade, but I think it really worked for me because it made me take on little and often rather than lots all at once, and made me walk through the water stations rather than trying to plough on through in a panic. 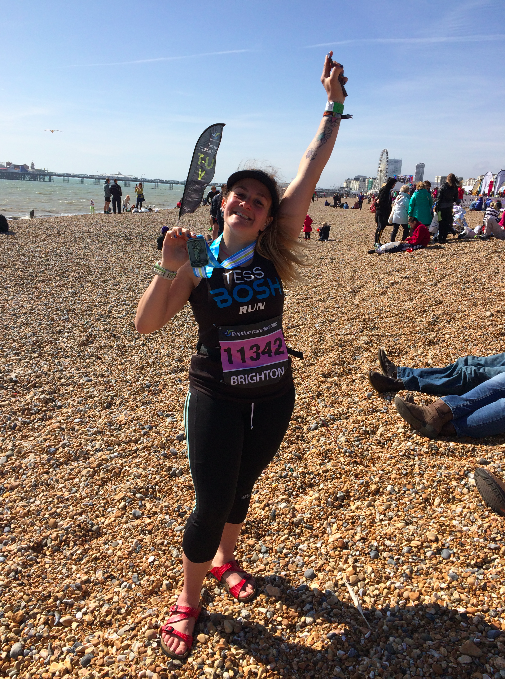 Because I’d set myself three time goals, there was no room for disappointment. I’ll be doing this from now on because it’s a great strategy to have and there’s no room for failure.

My three goals were:

I don’t know if I could’ve got the A Game had my body not seized up in the taper, or my hamstrings hadn’t been so tight, or if I’d just had the balls to run faster from the outset, but I do know that by this time next year or so, that 4:30 will be mine.

I’m in no rush, anyway. It’s all a bit of fun, I run because I love it, and I can honestly say, hand on heart, that this year’s marathon was my absolute favourite run of all time. Ever.

Entries are now open for Brighton Marathon 2016, I’m waiting for payday to decide if I’m gonna sign up again or do another one (maybe Paris or Berlin if I can convince the hubs to come or one day, if I ever get in, London??) It’ll be hard not to do Brighton though as it’s such an awesome race. The crowds are immense, the atmosphere electric and volunteers just amazing. If you’ve never done Brighton before, come and play.

** As well as bossing the marathon I also recovered like a boss with an amazing Afternoon Tea Spa Day at Ashdown Park Hotel in East Sussex. I hereby promise never to do another marathon without a spa day following it! 🙂

Did you race Brighton? How was it for you? How do you set yourself goals?