Coming back to Bexhill to race was always going to be special. I was excited to earn a medal in the town that I grew up in. It’s a sleepy, quiet town, with an impressive elderly population and it holds a world of happy memories of growing up and finding my feet as an adolescent. 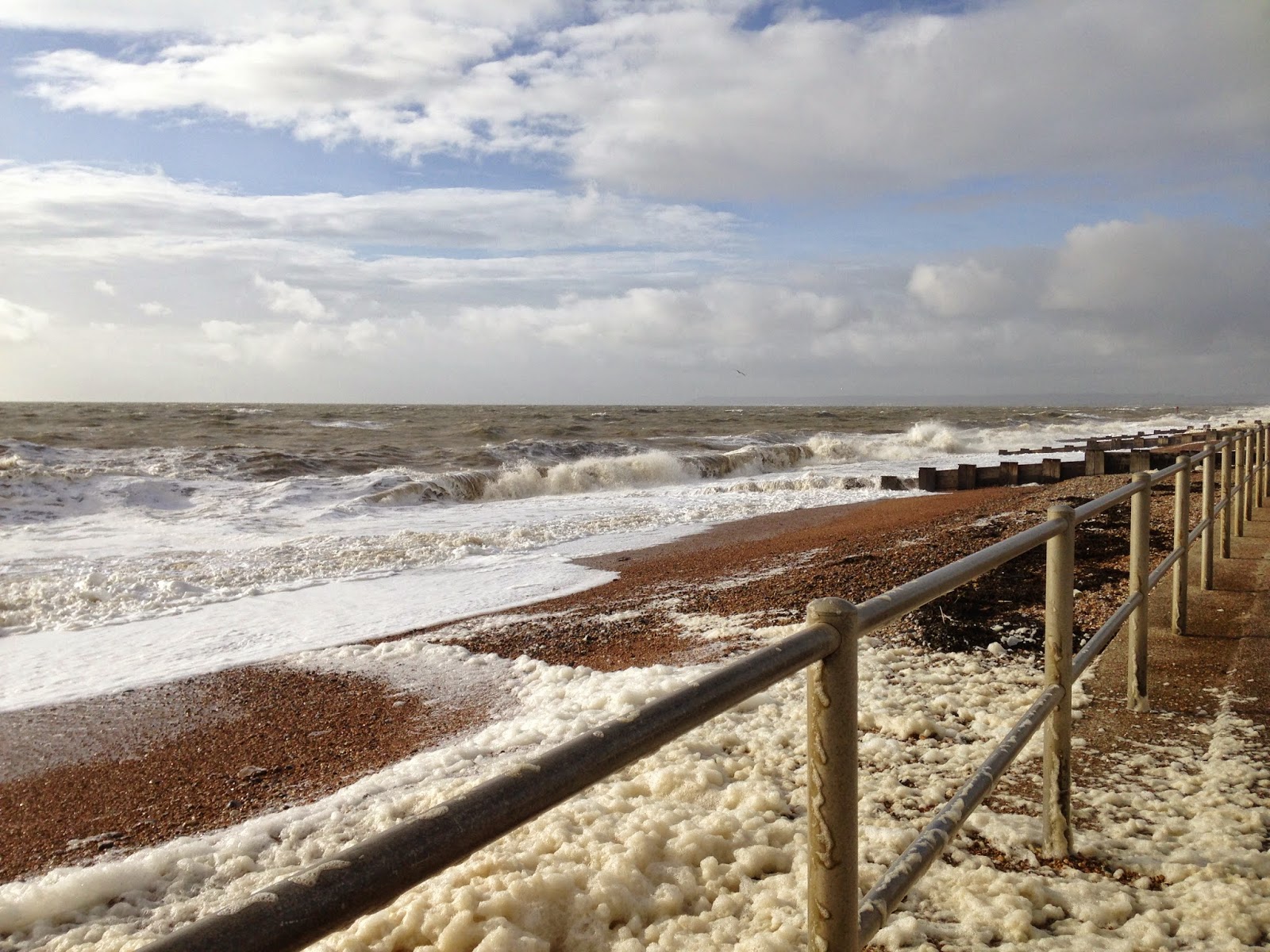 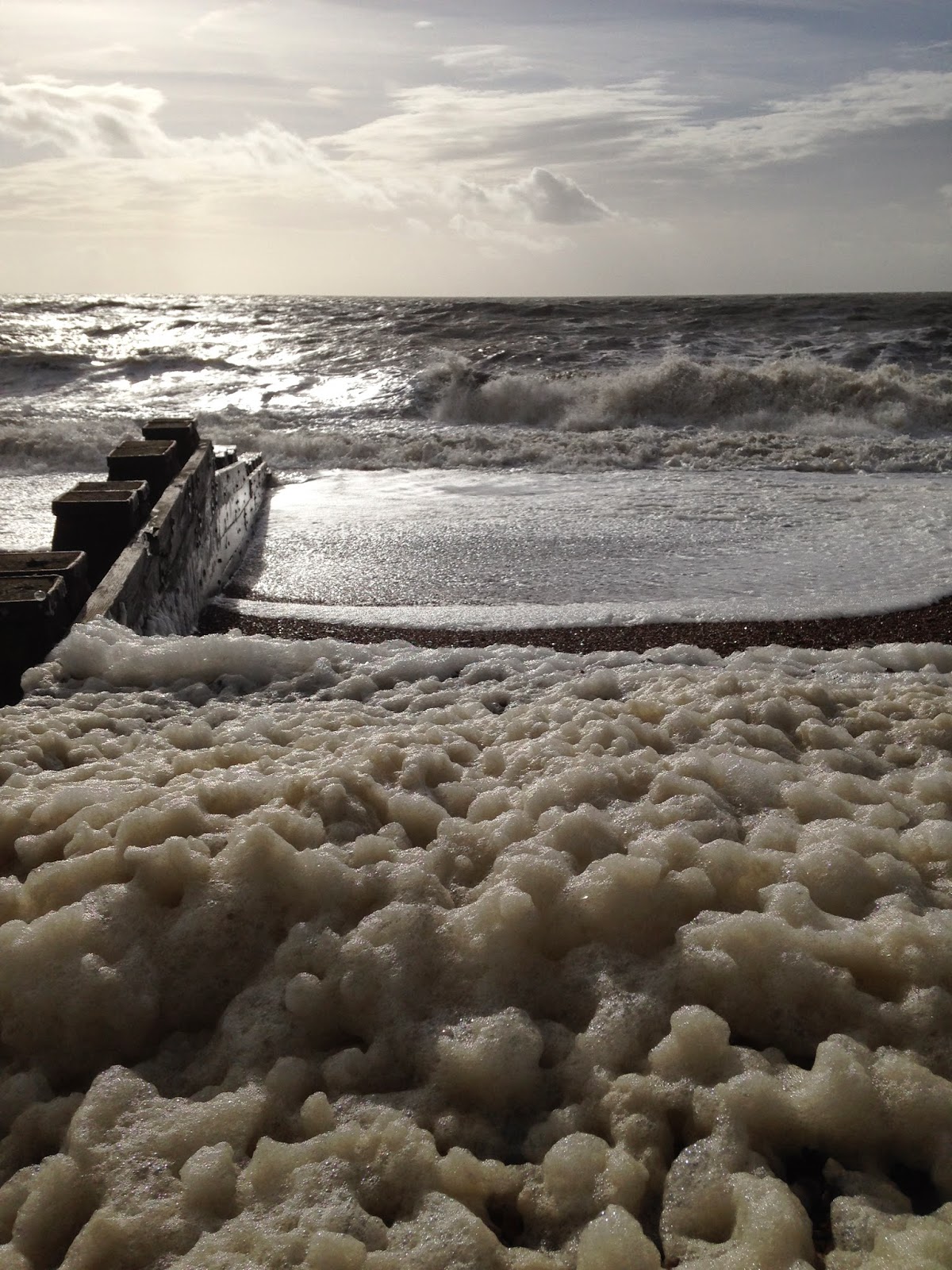 It was to be a race of firsts:

– The first time my mum (and uncle) would see me run – I felt like a kid on Sports Day. Other family members have come to watch me race before but for one reason or another my parents have never actually made it, so it was really nice to have mum there.

– My first BOSH Run group photo outside of Brighton. If you’re a runner and you’re not familiar with BOSH and, like me, are a sucker for a good group vibe, get involved.

It was also Chris’ first Half Marathon PB (I know, in that weather!!), smashing it in 1:43, so smiles all round. I actually found the wind really tough, and my legs were really heavy from the outset so I wasn’t expecting any miracles, I just wanted to get round in under an hour. I actually managed it in 57.26 which I was well chuffed about.

We will remember them

It’s a brilliant race for a fantastic cause – traditionally only a half marathon distance – for its 7th year organisers added on a 5k and quarter marathon as well as children’s races to the day which was great. Before we headed off we observed a two minute silence and sang the National Anthem in honour of those fallen servicemen who gave their lives in the Great War.

Both the half and quarter marathons started at 12.30pm, heading off into opposite directions to avoid confusion. We had two out and backs to Galley Hill before joining the main course to run the stretch down to Southcliff and back past the iconic De La Warr Pavilion to the finish.

The crowd support was brilliant; sun shining and a ferocious wind whipped up a spattering of shingle and seafoam to run through in parts. Despite it being mega tough in places, (with some roads being like a wind tunnel), it was fun, and exhilarating, and brilliant. If you check my splits you can guess where the shingle and wind tunnels struck.

All the way around I was looking for Chris to grab a high five but never saw him, and at about 8km I suddenly got a second wind (nothing to do with the actual wind blowing in the right direction, for once) and powered on for a strong finish. I love it when I can finish a race strong, although I’d also love it if one day I could be consistent with my pacing. I guess without the wind it’d be easier but it’s definitely something I have to work on. 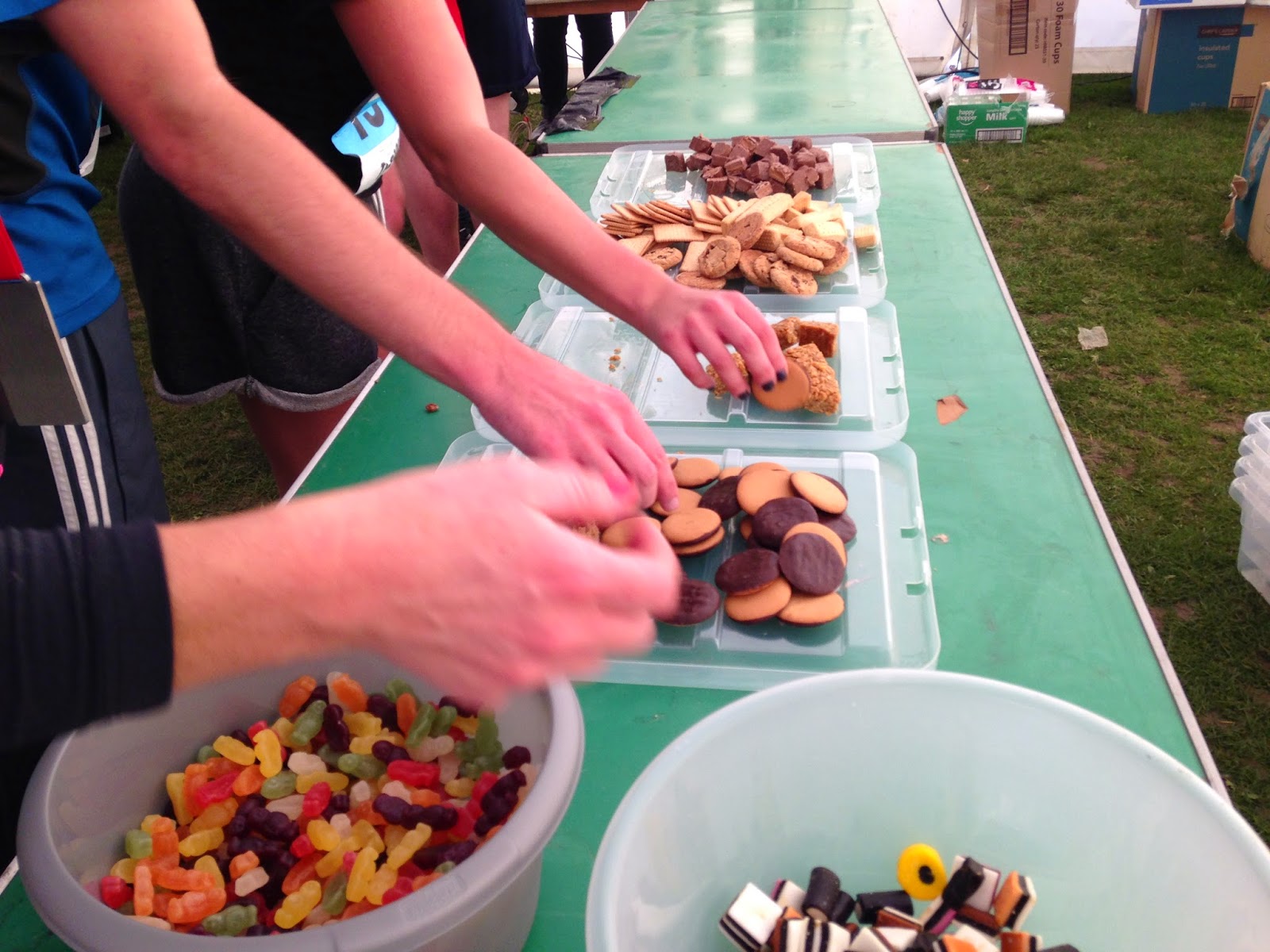 The finishing tent was like a secret world of pure JOY – an amazing medal, unlimited cups of water, a table of sweets, flapjacks and snacks to refuel with, and instant gun times printed on paper – nice one Poppy Half. 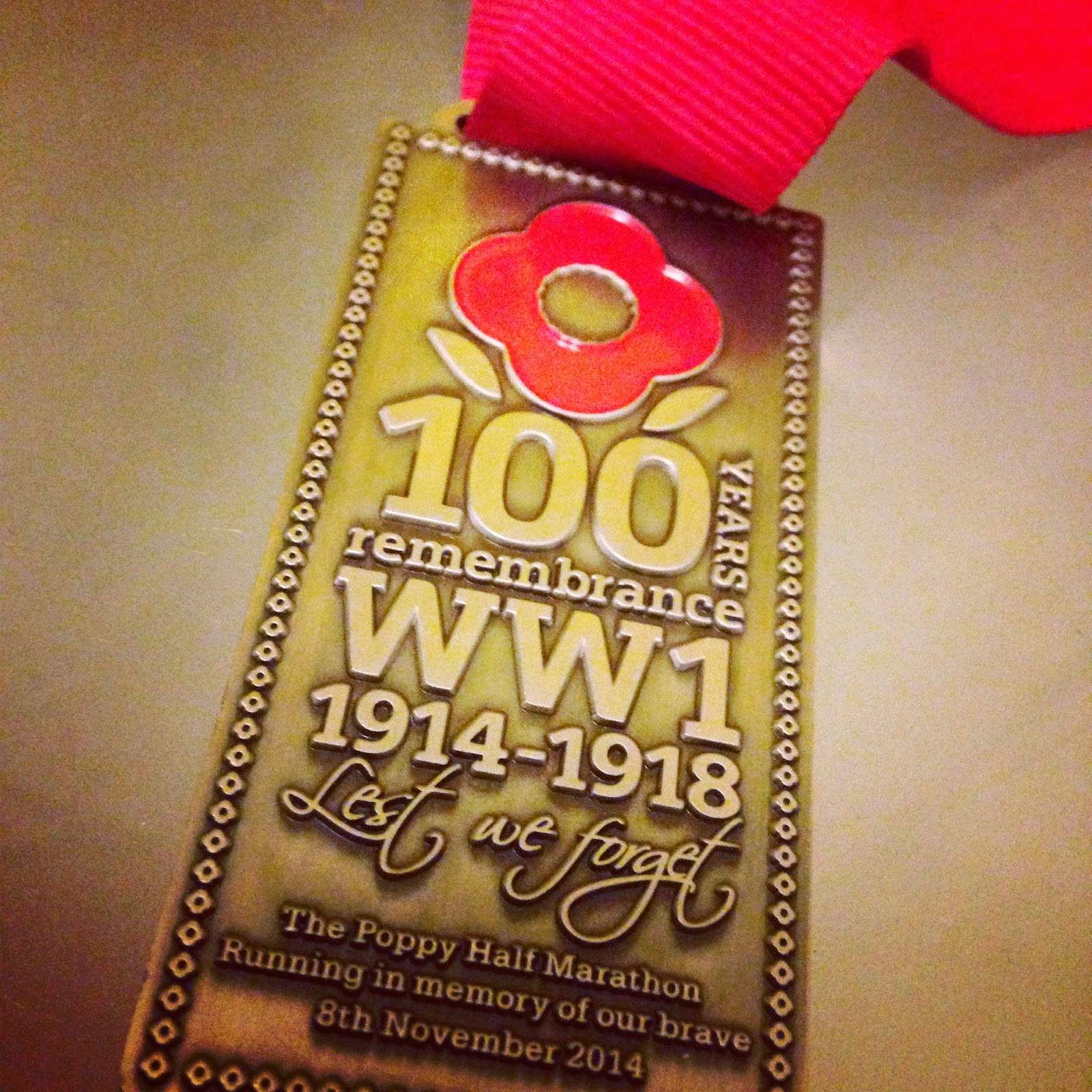 My Garmin said 57minutes and actually recorded the course a bit short which is a bit of a shame but I was never going for a PB so it’s no biggie. 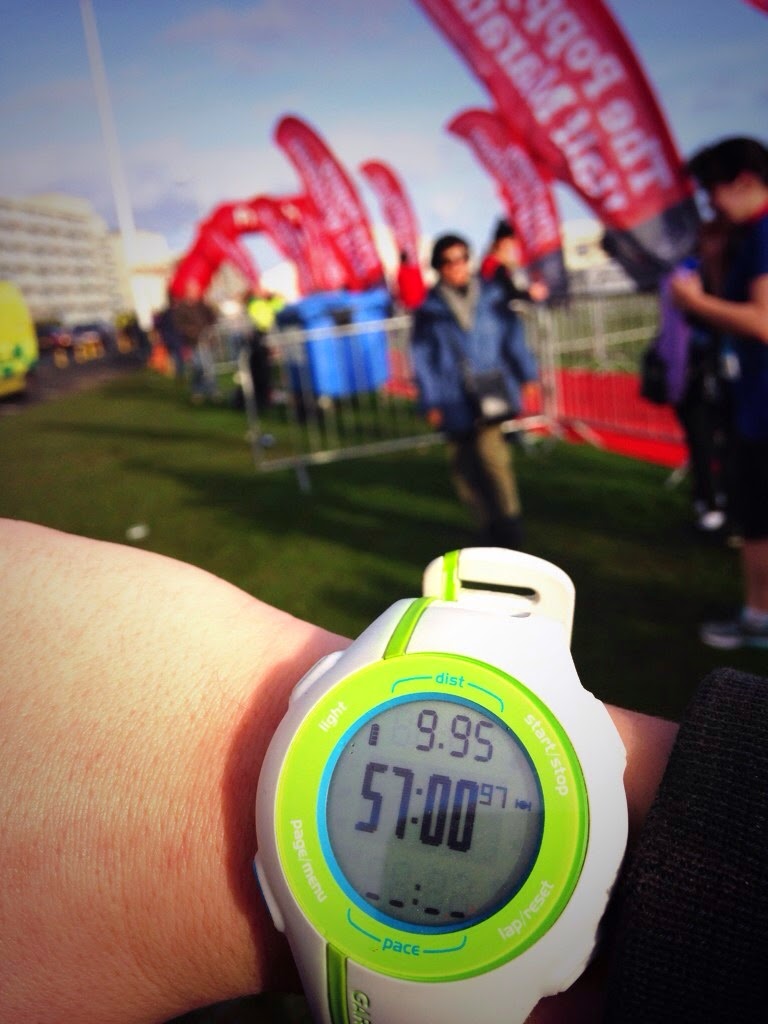 Once I’d finished cheering all the other BOSHers and Chris in to finish the half we grabbed a few medal shots and happily skipped off into the sunset for the BIGGEST STEAK YOU’VE EVER SEEN. My battery died so I couldn’t get a photo of it (which actually really traumatised me – #bloggersproblems) but I can assure you it really was the mutt’s nuts.

Well done Poppy Half – a fantastic, fun and very well organised race that we’ll definitely be back for!

What makes a great race for you? Does the weather impact your running?

Oh and if you like my blog please vote for me in the Running Awards! My blog is listed here as ‘Fit-bits blog‘! It takes 2 mins to register and I’ll shut up forever I promise. (Well, until the next blog post, anyway).