Getting better in week 6 –>

“Are you alright Tess?”

I’ve just been punched in the nose.”

This is getting hard. Like, really hard. When I signed up I thought eight weeks of training would be enough to get ready. Eight weeks of twice weekly sessions to learn technique, get strong and build fitness. I already had a pretty good base fitness already so I wasn’t too worried about that, even though I missed a couple of weeks of sessions due to getting married, I could catch up.

Now we’re coming to the end of week five and it’s dawning on me how bloody difficult this is.

I’ve signed up to Ladies Ultra White Collar Boxing. I know what you’re thinking… ultra what-now? Basically it’s a form of boxing that originates from New York in the 1980’s when a solicitor and a doctor joined a gym to be trained up to fight in a boxing match after just eight weeks. Since then it’s grown and hundreds of events are put on all over the world, with ‘white collar’ professionals and complete beginners training hard before battling it out in the ring.

You get eight weeks free intensive training from professional boxing coaches (that’s right kids, FREE) and get matched with someone of the same ability, size and weight at the end of it to go head to head for three two-minute rounds with a minute break between each one. Each participant has to train with full protective head gear and gumshield, as well as chunky 16oz gloves (which are bloody heavy after an hour of practice!) 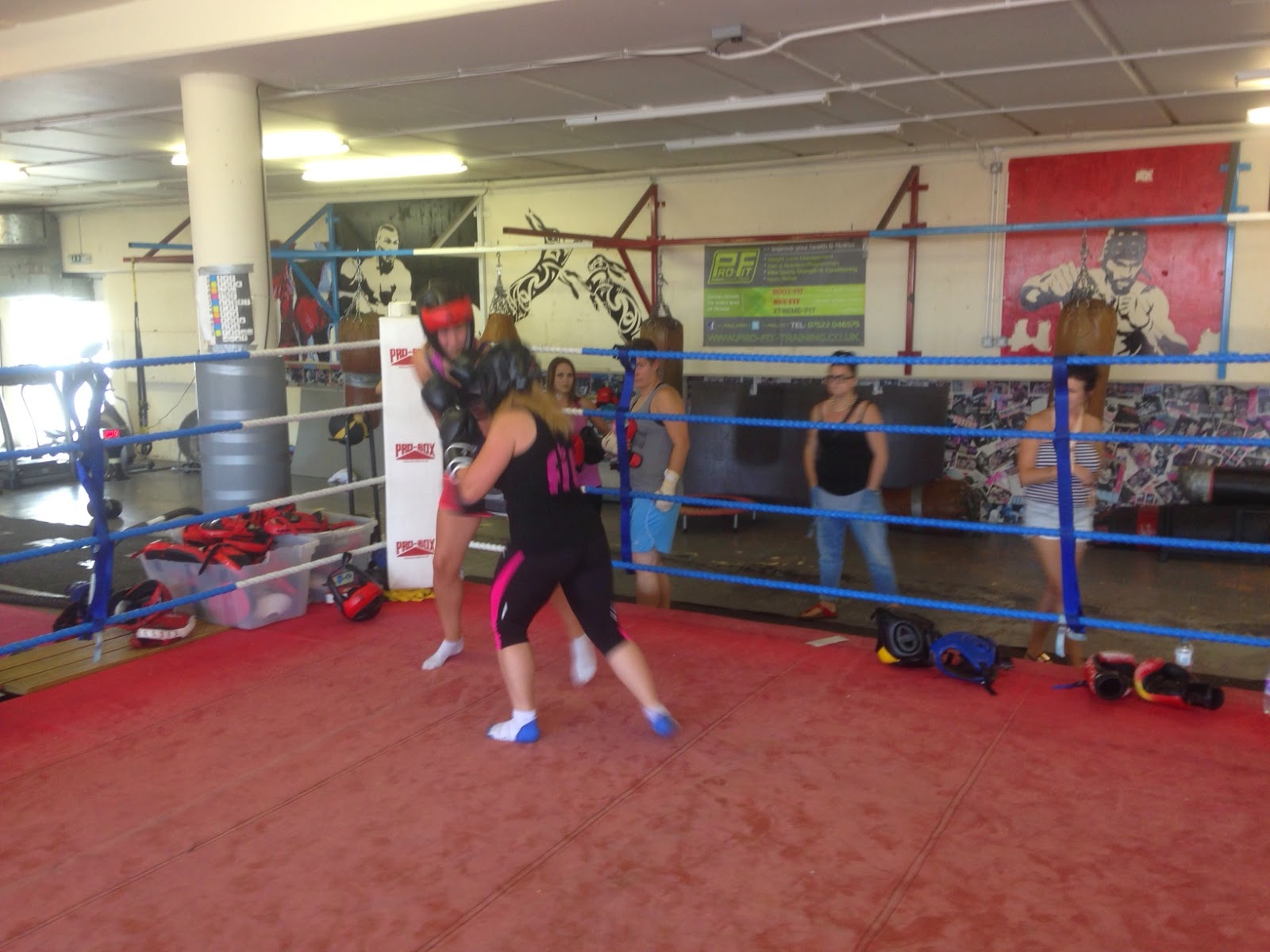 Money is raised for Cancer Research (please sponsor me here!) and you’re given tickets to sell for fight night – complete with a black tie afterparty post-fight. Free fitness & a party afterwards? Hell yes.

I’ve done lots of boxercise in the past so know the basics of different punches and how to do combinations, but replacing nice friendly pads with another human being who’s throwing punches at the same time is a bit of an education let me tell you!

Right on the noggin

After a few weeks of learning the basics, my first sparring session went really well. I was paired with my mate, and we’d spent the previous 45minutes practicing various drills with blocks to see what it felt like to be hit continuously. Stepping into the ring for the first time was scary but I was so excited.

We’d agreed to not go heavy on each other but adrenalin took over and we went for it – me with the body shots and Holly with the jabs and crosses right on the noggin. About 10seconds after this video stopped recording she landed a corker bang on my left eye which proper stunned me!

It didn’t hurt though, which was surprising. She got me a few times in the head and it didn’t hurt at all, just shocked me a bit. After lots of praise from the trainers and other girls watching we both left that session full of confidence and excitement about the whole thing.

For me though, it hasn’t lasted. We’ve signed up to PT sessions and joined the boxing classes at the gym to get extra training on top of our twice-weekly efforts with the UWCB group. Last night was the first class outside of our beginners crew and it was educating to say the least!

I feel like I got battered (I totally did) but I know what I need to do. I’ve got a strong punch but I don’t move very well – I spend a lot of time hopping around wasting energy opposite my opponent, giving them a clear shot at my head, something which was taken advantage of quite a lot in the class, and I got bonked on the nose numerous times.

I need to move my head, not just my feet.

I dunno if you’ve ever been punched in the nose but it’s a one-way ticket to pouring, streaming eyes, and OK I *might* have mixed a little cry in there as well about how fecking hard it was and how I couldn’t stop them coming.

So we’re sparring, I’m crying, everyone’s asking if I’m OK and my trainer is in the corner telling me what to do and it’s all a bit overwhelming.

I grew a pair and got over it in the end and when we swapped partners the class instructor told my new partner to ‘go gentle with this one as it’s her first time’. I felt humiliated but thankful for his understanding. And to be honest, everyone was great, really supportive and ready to help me get the technique down.

The rest of the class was pad work and fitness so I felt more at home by then, but I left the class feeling battered, bruised and more than a little apprehensive about the next few weeks of training.

Despite the tears, real or not, I’m more determined than ever to get good at this to be confident and strong when I step inside that ring on October 5th. I love a challenge and jumped at the chance to sign up for this because I knew it’d be great for fitness but also because I knew it’d be bloody hard and I’d have to push myself to my limits on every session.

Boxing’s not like running. If you get it wrong, you get punched in the face, and I’m just about getting used to that. I’ve got 23 days to get better. Bring it on.

I’d *really* love some support along the way so if you feel like you can spare a couple of quid for a great cause to help me not give up along the way, please sponsor me here or

If you’re in Brighton (or nearby and fancy donning a frock or a black tie to come and support me on the night (and enjoy the afterparty) please tweet me or reply below for a ticket. They cost £20pp but it all goes to charity, it’ll be a great night and I’d really, really appreciate the support!

Getting better in week 6 –>