With the previous post gushing from the eyeballs about how amazing it is at Hillmotts Dorset, let’s get down to the nitty gritty and go through the daily sessions recap. Day One has a distinct lack of photos as I was too busy coming to terms with the constant flow of exercise to ask the trainers to take photos of us! 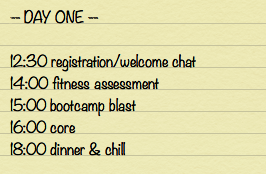 After we arrived and registered, Chris sat us down outside, weighed us (if we wanted to), and asked us about our current levels of fitness, before the group were led round to the green for a warm up and strength assessment.

Different tiers of exercises were given so we could choose the level of difficulty we wanted to complete throughout the weekend, such as press ups with knees down/full press ups/military press ups, or half squats/full squats/squat jumps etc. There were different variations of burpees too, which no one in the history of the world is a fan of… 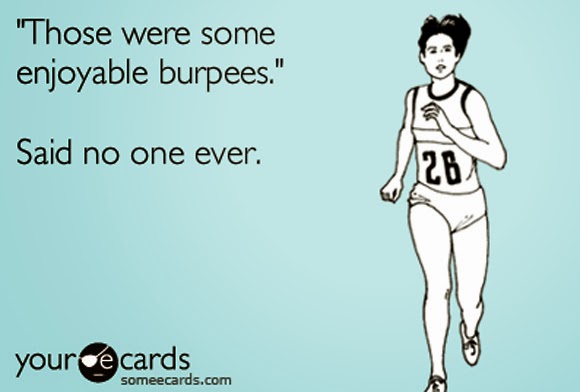 This was really helpful as there were lots of different fitness levels in the group and it was good to know there were easier options to suit everyone.


The run that made EVERYONE cough!

Then it was the running part of the fitness assessment, so we got into pairs. In our pairs we took turns to run about 100 metres down the path and back continuously, for six minutes each. We were told to run as hard as we could for this six minutes, to give it our best and see how many laps we could do. Each time we got back to the start we high-fived our partners and enjoyed the cheering and encouragement from the group.

That first run must’ve been a massive shock to the system for the group because once we’d finished, EVERYONE was coughing for the rest of the afternoon! It was quite a nice ice breaker in a way, and got everyone laughing. I managed 6.5 laps in the end (the .5 being very important, obviously), but ran so hard my chest was really tight afterwards, so I joined the coughing crew too. It was like a scene from the London Gentlemen’s Club in Family Guy:

After the fitness assessment it was Bootcamp Blast and Core with the two Chris’ (nicknamed Dark and Silver). In the bootcamp class we were put through our paces with a range of bodyweight and cardio exercises, and whenever Chris shouted ‘rope’ we had to run and pick up the rope above our heads and run with it in a line. (By the way, if you ever do this, don’t underestimate how hard it is to keep your arms above your head for that long!) It was like this but without the nice sandy beach: 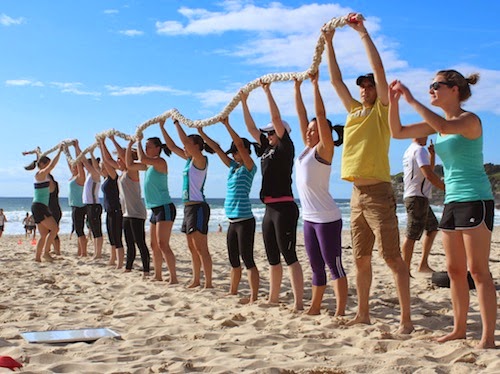 The Core class was all about compound core exercises, so using multiple muscle groups to work the core. I’m not very good at traditional core exercises such as crunches and sit ups as I always pull my neck, so enjoyed the different variations we were shown (anyone remember the name of that turny-over one that took ages to learn? Was it a *something* burpee?)

After Core it was time to eat and chill – with sweet and sour turkey and rice on the menu and a nice warm bed calling me, I didn’t hang around and went to bed early ready for the big day tomorrow.

No. of throats cleared: 25 throats, 250 times
No. of rice grains left on dinner plate after eating: ZERO!