This week is the first official week of training for Brighton Marathon 2015.

I’m attempting the Intermediate plan from RunLounge / RunBrighton as did the Beginner’s this year and was advised to step it up a notch.

I ran my first marathon on three runs a week as didn’t wanna push it with my knees, but I’m hoping I’m now strong enough to cope with the four or five weekly runs – especially with the extra strength training I’ve been doing with Love Life Fitness (more on that later).

We’ve been in France for Christmas and I’ve been loving the quiet country lanes instead of the busy streets of Brighton to bosh out the miles. I’ve also loved the excellent level of Christmas bingeing that’s been happening in between runs – a PB in many ways.

Oh, and I got the BEST present from my Secret Santa:

So a week of Christmas running looked a bit like this:

Not much to say about this one – I ran the nearly two miles to work, it wasn’t comfortable and I didn’t like it, waaaaaaah. Check out my AWESOME pacing consistency. Why can’t I keep a steady pace dammit!!

After a whole day of sitting on my arse on trains and ferries to get to Droux for Christmas, I was itching to get out to turn the legs over, so went out with my sis-in-law for a nice easy paced 5k.

We ran down to the village of Droux and along the old railway track before coming home to refuel on chocolate, bread, cheese, wine and everything else you should be gorging on at Christmas.

After waking up with a belly full of wine and food I kinda knew this run wouldn’t start off very easily. On the plan was a 30 min progression run – 10 mins easy, 10 steady and 10 threshold. I did the same loop as the day before and it took me a good half of it to warm up and get comfortable.

By the end though I was flying, sort of, in a not-quite-threshold-but-the-best-you’re-gonna-get-at-Christmas kind of way. I totally made enough room for the mountain of food I packed away that afternoon.

Lovely progression run done through the Frenchest village there ever was – Merry Christmas everyone! #ukrunchat pic.twitter.com/c15nhqHPv6

Run 4: The one with the donkeys

Boxing Day was a day off for running but I did do the bodyweight circuit that Amy had given me to do while I was away. On paper it looked like an easy-enough session but by the third repetition I was more than ready for another glass of wine.

Today’s run was the long run – 80 mins slow and steady – I was a good girl and used Garmin Connect to map out the route before setting off, wrote down directions and made sure everyone had their phones on in case I got lost and needed a Cote du Rhone delivery to the side of the road.

Right, here goes. If I’m not back in an hr and a half, bring wine and cheese to one of these lanes… #ukrunchat pic.twitter.com/gqNq8SNZTX

I ran down to Droux and towards La Brousse along a very busy and not-made-for-running main road. This bit wasn’t good fun at all, there were loads of cars and although I was on the grassy verge I decided there and then not to run that way again. The numerous French drivers doing 60mph past me seemed to agree as they honked their horns aggressively.

My calves were also screaming at me for the first few miles and I had to keep stopping to stretch. Anyone else had this? It’s a new one for me, not sure what to do other than foam roll and stretch it out? Once I turned off the main road towards Villefavard it was all lovely country lanes and quaint French villages so I relaxed into a comfy pace again, stopping to check the route and take photos/stretch out the angry calves.

I met a couple of friendly French donkeys too, which slowed me down a bit as I stopped to say hello: 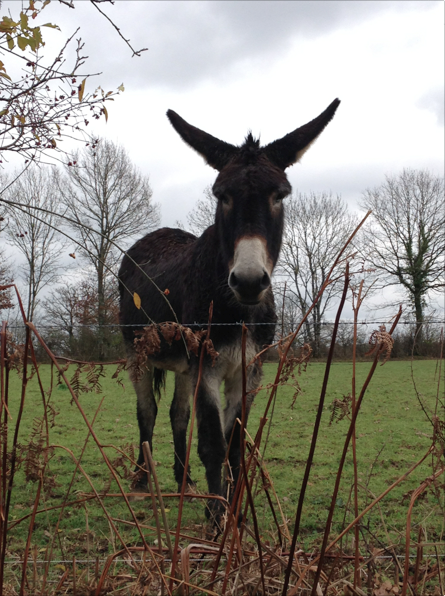 I got back tired, hungry and achey but glad I could tick the session off as done, despite the pain and extra Christmas weight I was carrying.

I’m pretty convinced that once I’m back home and not eating / drinking like a pig it’ll be easier to bosh out the miles for the coming weeks.

Have you ran this week or written it off to enjoy the break?

Who else is marathon training for a Spring race?