I signed up to Parkrun ages ago, when I first started running, but (wait for it…) never got round to doing it until now. I love the idea of a free weekly timed 5k run – what a great way to train for a bigger event in an almost-race environment. A training race, if you will. 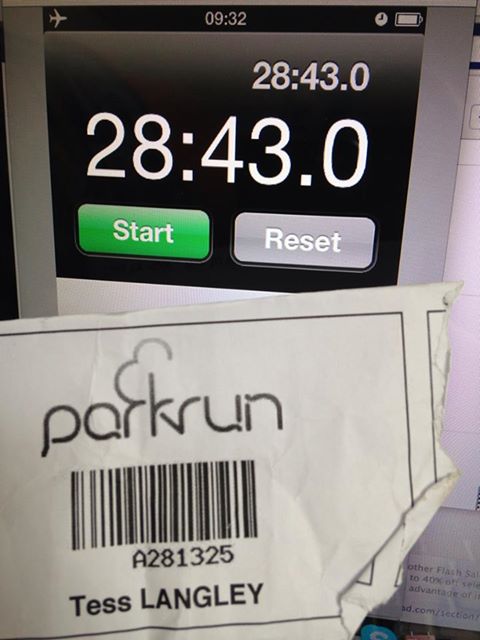 Sometimes when I’m running at a comfortable pace and have eaten a good breakfast, got enough sleep the night before and have the right beats pumping through my earphones (any dnb, trance or progressive/hard house will do nicely, thank you), I feel like I can run forever.

I’ve run two half marathons before, and have lots of double-figure miler training runs under my belt, so in theory a 5k should be [pun alert]… a walk in the park.

There are a number of reasons why today, this was far from the case:

1) Too much alcohol consumed the night before. (It’s May, there’s too much going on in Brighton in May to not go out).

2) A knock on effect of the above = not enough sleep. A pissed up 2am bedtime is not conducive to an energised ready-to-run wake up, I can tell you that much.

3) Knock on effect of not having enough sleep: I didn’t get up in time to have a proper breakfast.

4) Because I got up late, I had to rush, which means I forgot to set up my GPS tracker on my phone and didn’t have time to sort my earphones and playlist out so had to run without music. Not that I didn’t try to sort this out – the first 200m were spent frantically trying to untangle aforementioned earphones, but in the end I gave up and dumped them by my bootcamp buddies as I passed them doing their session.

So, didn’t get off to the best start, and as I haven’t ran for a few weeks due to lots of bootcamp and Zumba sessions, it was a lot harder than it should’ve been, and took a good chunk of the course to get comfortable.

But, despite the shitty start, I tried to run a little faster than I normally do – made much easier when you’re being lapped by the world and his wife – and got round in under 30 mins, which was my initial goal.

Now that I’ve set my pace, I’m gonna try and get faster or at least maintain it – if I can maintain a 9:45min/mi for longer I might be able to shave a few more mins off my Half Marathon PB, which is 2:21:27. Would love to bag a sub2hour half before the full Brighton Marathon next year.

Another incentive to do it faster is that I could run over to the other end of the park afterwards and join in with more of the bfit Saturday bootcamp session. This morning I made half of it.